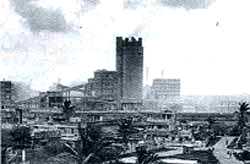 Indian industry has once again disregarded a government deadline to implement compulsory environment audit. The scheme requires all manufacturing units to list such details as materials used, sources of energy and effluent constituents. By August 30, manufacturing units were to have submitted evidence of having carried out these audits to their respective state pollution control boards (SPCBs). But sources in the Union ministry of environment and forests (MEF), which will collate the data sent by the SPCBs, reveal only a few units have filed the audits.

Says T G Joseph, joint secretary in the MEF who oversees the implementation of environmental audits, "We are determined to make the audits the norm for Indian industry. Anybody who fails to do so will be taken to task as per the law." But others in the ministry admit the scheme has yet to take off. Interestingly, MEF had extended the deadline for environmental audits from May 15 to August 30 because of widespread non-compliance.

Meanwhile, according to a spokesperson of the Confederation of Indian Industry, "Many firms that have reported to the SPCBs have merely passed on environmental statements asserting they are adhering to the various pollution control laws, rather than actual environmental audits".