Excessive rainfall has led to to floods in 256 districts across 13 states; on the other hand a large part of India is under drought-like conditions 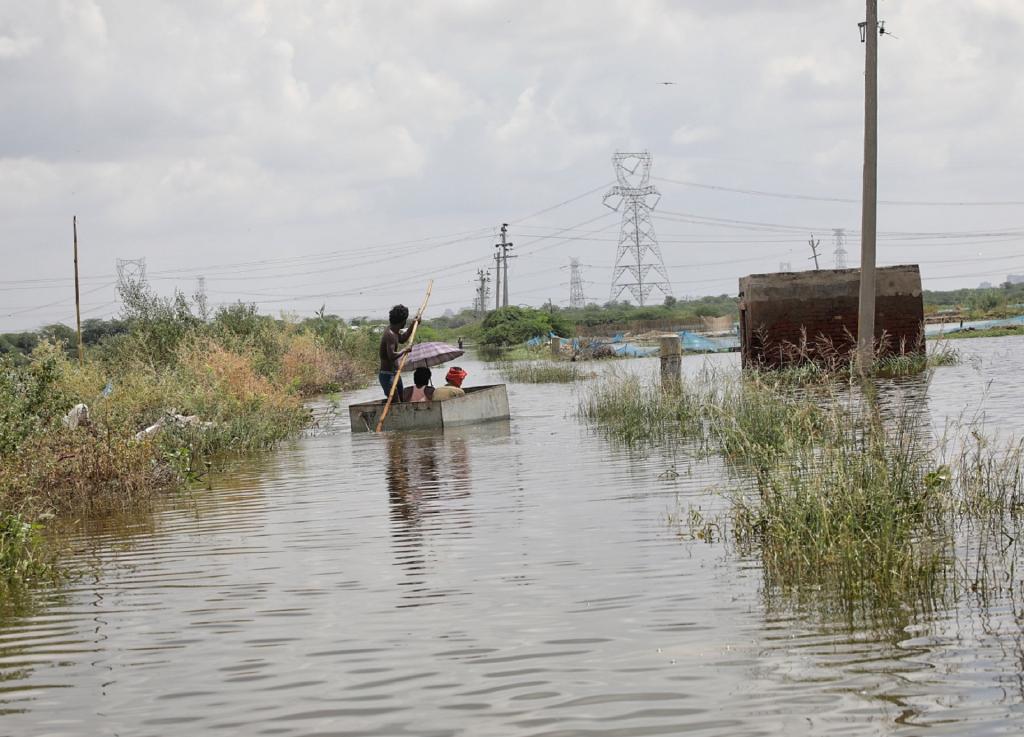 The conundrum is back. A fifth of India’s districts were under drought-like conditions by the end of August 2020 even as a large part was negotiating floods; cumulative rainfall for the whole of the country has been 10 per cent above normal, according to data from the India Meteorological Department (IMD).

If the trend continues in September, monsoon rain for India will top 10 per cent over normal for the first time in 25 years. This will be on the back of a nine-per cent excess in 2019. The last time there was such high excess for two consecutive years was a century ago, according to data from the Indian Institute of Tropical Meteorology (IITM), Pune.

Northeastern states, including Manipur, Mizoram, Nagaland and Tripura, have all suffered large such deficits. They have been through an extended spell of failed monsoon rains for the past several years.

In the north, the Union territory of Ladakh faced deficient rain in both its districts — the deficit being as much as 91 per cent in Kargil. The situation was similar for more than half the districts in neighbouring Jammu and Kashmir.

Rainfall was also deficient in Delhi, Haryana, Himachal Pradesh, Jharkhand, Punjab, Uttarakhand and Uttar Pradesh, affecting between a third and a half of the their districts.

At the same time, excess rain in several parts of the country led to floods in 256 districts in 13 states. By early September, 1,034 people were killed in the floods while nearly 20 million were affected, according to data from the Union Ministry of Home Affairs.

More than 1.2 million hectares of cropping area and 5,220 animals were also affected, leading to a double whammy for farmers already fighting the impacts of the novel coronavirus disease (COVID-19) pandemic and subsequent couyntrywide lockdowns.

Gujarat and MP were yet to report impact on cropping. Most of the flooding — especially in those two states — were in August, when a 25 per cent excess rainfall broke a 44-year record.

RAINFALL IN INDIA THIS MONSOON 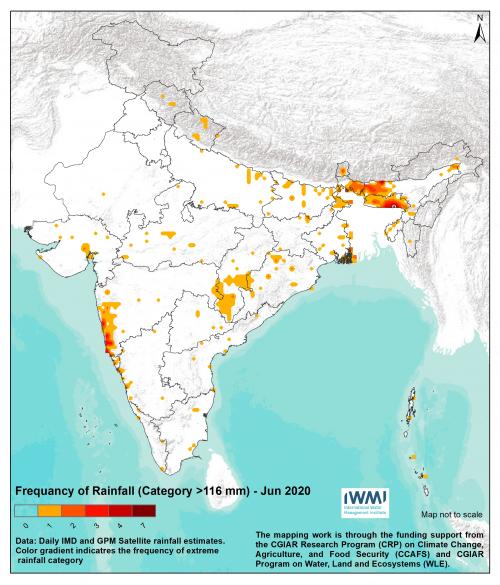 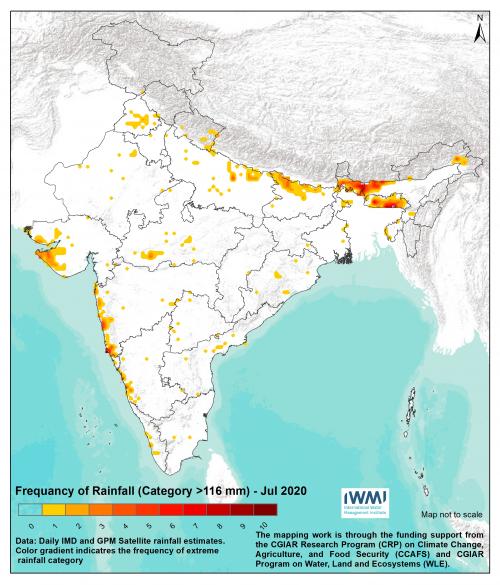 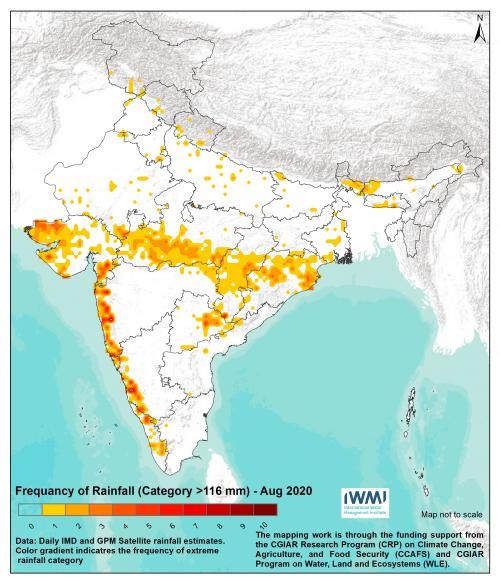 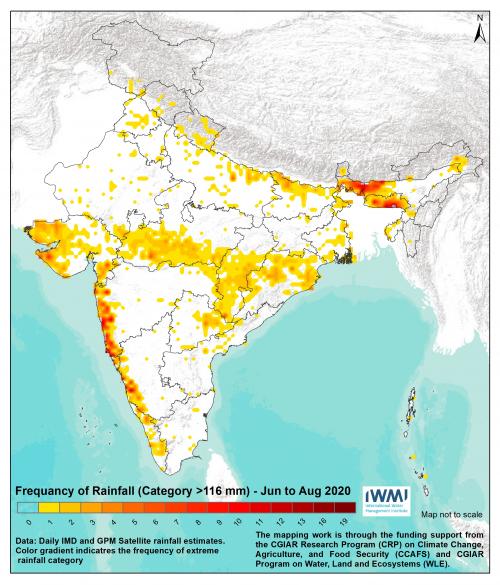 There was a significant rise in the number of very heavy rainfall events — when the downpour exceeds 116 millimetres — in August from June and July: They are marked in yellow and red in the maps above, developed by International Water Management Institute (IWMI) based out of Colombo, Sri Lanka.

In June, most of incidents were concentrated mostly in north West Bengal, Assam and Meghalaya or along the western coast of India where monsoon rains were aided by Cyclone Nisarga in early June. Monsoon was rather inactive this July, clocking a 10 per cent deficit.

Very heavy rainfall events decreased on the western coast and in the North East. August had very heavy rainfall events along the entire western peninsular coast and along a wide belt that ran across the centre of the country from Gujarat to Odisha, covering MP and Chhattisgarh. Rains practically abandoned the rest of the country that month, with a few incidents in parts of north West Bengal, Assam and Meghalaya.

One reason for the very heavy rain across the country and the resulting floods was the prevailing La Niña-like conditions in the Pacific.

“Currently we have La Niña-like conditions in the Pacific, favourable for a strong monsoon circulation,” said Roxy Mathew Koll, a climate scientist at IITM. The northern Arabian Sea temperatures were warm as well, with these warm temperatures providing an abundant supply of moisture and heat for the monsoon, enhancing convection, explained Koll. “This can result in episodes of heavy rain, like those we saw in August,” he added.

Millions of people across Bangladesh, India and Nepal were marooned, with their homes damaged and crops destroyed by floods that were the worst in recent years.

Flooding in India, Bangladesh and Nepal 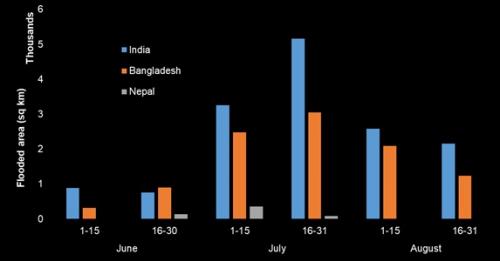 This year’s monsoon floods were quite different, with prolonged inundation and the COVID-19 pandemic having an aggravating effect on flood-affected people, pushing them further into poverty.

More than 1,000 people lost their lives and more than 10 million people were inundated across the Ganga basin. A third of Bangladesh was reportedly affected by flooding in the past two months. An estimated 1.5 million people were displaced and hundreds of thousands of houses damaged.

This development was a significant opportunity to the disaster response community for whom rapid access to analysis-read data was needed to inform disaster management response teams for timely intervention and management plans.

Even though this July was the driest one in the past five years, Bihar, Jharkhand, Uttar Pradesh and West Bengal were severely flooded. 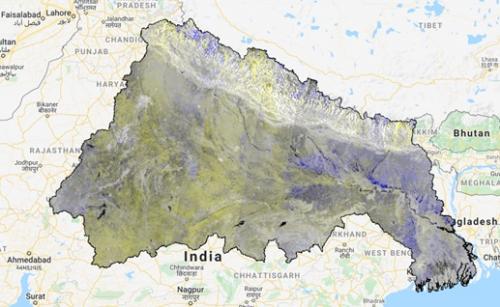 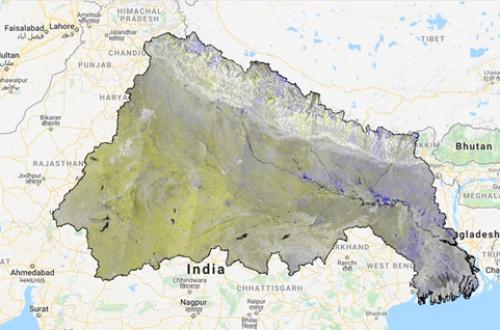 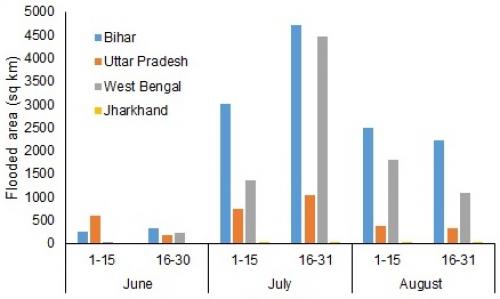 There is, thus, a clear need to develop innovative flood-risk solutions into a climate-smart bundle, helping smallholders prepare for a new climate era, increase their resilience to disasters and improve their opportunities for recovery. This is especially important, considering monsoon flooding becoming a usual phenomenon in the Ganga basin.

IWMI, ICAR and CGIAR CCAFS and WLE implemented index-based flood insurance and bundled insurance solutions with flood-tolerant seeds and climate information services to protect farmers from financial losses in case of major floods. Farmers, through this, receive speedy compensation payouts and are able to live with nature and the risks associated with it.