We focus on large, charismatic animals at the expense of these crucial "lowly creatures" 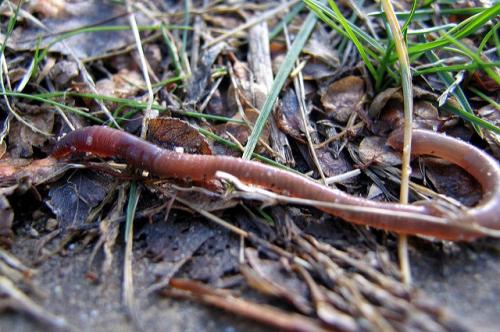 It may be doubted whether there are many other animals which have played so important a part in the history of the world, as have these lowly organised creatures.

– Charles Darwin, The Formation of Vegetable Mould through the Action of Worms (1881)

Not all wildlife is created equal in our eyes. Take the earthworm, which doesn’t have the widespread appeal of larger, more charismatic animals such as gorillas, tigers or pandas. Worms are never going to get a strong “cute response”, and they won’t ever be the face of a conservation campaign.

But what Darwin rightly recognised is that – panda fans avert your eyes – worm conservation is much more important once we factor in their provision of what we now call “ecosystem services”, which are crucial to human survival. Darwin spent 39 years studying these animals for a good reason. In fact, earthworms have even been ranked the number one most influential species in the history of the planet – above dinosaurs and humans.

Why care about the worm?

Ecologists consider earthworms “keystone species” because of how much they influence the physical, chemical and biological properties of the soil. Here are five reasons why:

1) Earthworms are recyclers. They play a crucial role in breaking down organic matter and fertilising the soil, simply through their constant eating and pooping (about 1.5 times their body weight a day). What comes out the other end – known as a worm cast – is full of nutrients and bacteria that are beneficial for plants. Scientists have measured up to five times the amount of key nutrients in worm casts compared to surrounding soil.

A study in Hawaii found that replacing a portion of standard fertiliser with vermicompost (compost from worm casts) increased yields of crops such as tomatoes and strawberries by 30%. It’s hard to generate industrial amounts of worm cast, of course, and vermicompost remains more expensive than commercial fertiliser. But it’s an intriguing example of how earthworms can help humans.

2) Earthworms are great “soil engineers”. As they move through the soil, earthworms loosen and mix it up, helping to aerate and drain it. This brings nutrients to the surface, making the soil more fertile, and helps prevent flooding and erosion.

3) Earthworms are barometers of soil health and toxicity. They’re very sensitive to soil pollutants such as pesticide residues or unwanted heavy metals (zinc, lead and so on), and they are badly affected by changes in land use such as deforestation to clear the way for intensive farming. This means the health of local worms is proving to be a useful tool to assess the impact of different land usage and pollutants.

4) Juicy earthworms are an important food source. They are protein-rich and feed a number of animals, such as the European badger.

5) Earthworms can help repair damaged soil and may provide solutions to man-made problems. Research suggests that earthworms could help to clean up land contaminated with toxic heavy metals such as lead.

Other studies show how earthworms can speed up the restoration of degraded land in the tropics, while research in northern Vietnam found that reduced earthworm diversity due to land use change also had a significant knock on effect on soil fertility, water drainage and soil erosion.

So, earthworms are our underground allies – if we treat them right. Earthworms make it possible for us to live on the planet, simply by eating and pooping, and ploughing up, ventilating and fertilising the soil along the way.

Climate change and human intervention are fast-tracking the world’s loss of biodiversity. The plight of the tiger in India and the orangutan in Indonesia are well known, but scientists are also becoming concerned about earthworms and other animals that we are less familiar with, but which we can’t afford to lose.

If pandas go extinct, it will be very sad. But, a world without earthworms? Arguably without earthworms in our soils, life could vanish pretty quickly. We would have less food, more pollution, and more flooding.

No matter how cute a panda looks, it is Darwin’s “lowly” earthworms that are doing dirty, but crucial, work in the soil below.