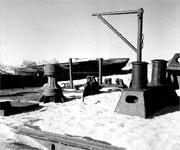 muynak, a small town lying about 1,000 km west of the Uzbek capital Tashkent, bears testimony to one of the worst ecological disasters in the world - the shrinking of the Aral Sea. Once a green, bustling seaport, it has been reduced to a salty desert. The leaders of five Central Asian countries - Kazakhstan, Kyrgyzstan, Tajikistan, Turkmenistan and Uzbekistan - met in the Kazakh capital Almaty to discuss the plight of the inland sea which was once the world's fourth largest lake. Muynak is one of the worst affected by the shrinking sea. Exotic flowers, wildfowl, otters and other fauna that once flourished around Muynak have now become relics in the local museum. Local people now make ends meet by shipping in fish from the Caspian Sea and the Baltic Sea.The devastation of the Aral started in the 1960s when the Soviet government decided to boost cotton production in Central Asia and drew huge amounts of water from the Syr Darya and Amu Darya rivers which feed the Aral Sea (Down To Earth, Vol 4, No 12).