A four-day fire on the Burhi Dihing, a tributary of the Brahmaputra, at Pandharaghat village, 450 kilometres east of Guwahati, has affected fishing and farming, locals said. The riverine ecosystem in the region enables fishing and farming of food grains.

The area is part of ‘rice bowl’ Sasoni, a region that encompasses the Dibrugarh and Sivasagar districts of Upper Assam. Comprising 85 villages, Sasoni is crisscrossed by oil pipelines and small rivulets that join the Burhi Dihing, which then flows into the Brahmaputra.

On the morning of January 28, 2020, the central tank farm (CTF) of public-sector Oil India Ltd (OIL) shut off all inlets from various oil wells, or outlets, in the region. Within a few hours, authorities observed leakages at five different points within the periphery of the CTF as pressure started building on all the pipelines. By the end of the day, two leakages were also observed in the delivery pipelines.

According to a February 3 press statement, crude oil leaking out of at least one pipeline started to spillover and it began to trickle down to one of the rivulets that join the Buri Dihing. By January 30, a large amount of crude oil had leaked onto the river. 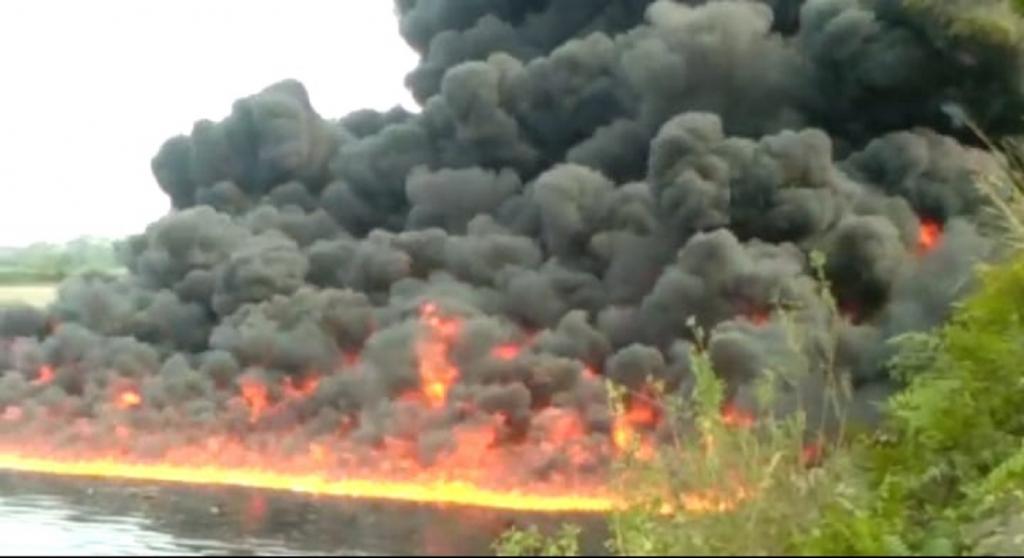 The press release states that some miscreants may have set the oil slick on the river on fire. The fire started on January 31, according to media reports.

“We were ready to evacuate from the village. The river was burning 200 metres from our houses. We do not know how to stop a river when it is on fire,” Anil Das, a fish farmer from Pandharaghat, said.

“This is a season for fishing. The river water is clear and catching fish is easy as compared to the monsoon months. But with this oil still floating on the river, all the fish have moved upstream,” he added.

The administration was slow in its response and the reason might have been political, residents said.

“They deliberately did not visit the area for two days because we have been protesting the Citizenship Amendment Act and supplying food grain to the protestors. It was only February 2 that a team finally came to inspect the river,” Rajen Dutta, a resident of Pandharaghat, said.

An OIL spokesperson informed the media on February 3 that the fire had been contained. However, according to locals, much of the oil slick has travelled downstream.

“As we moved further downstream, we observed that the oil slick was settling down next to the banks. In some places, we saw small, pebble-sized crude oil concentrates floating in the water. In places, we also saw fires which are moving towards the ground burning the dried grasses and shrubs,” Angshuman Mishra, a Duliajan-based environmental filmmaker, said.

OIL officials are yet to estimate the quantum of the oil that may have been leaked on to the river and its floodplain.

Local journalists said the pipelines carrying crude in the area are at least 60 years old as Naharkatia and Sasoni are some of the oldest oil concessions in Dibrugarh district.

“The oil pipelines here are very old. Some of them are at least 70 years as oil drilling in the area has been going since the 19th century,” Pranjal Bhuyan, a local journalist from Tengakhat town, located close to the affected region, said.