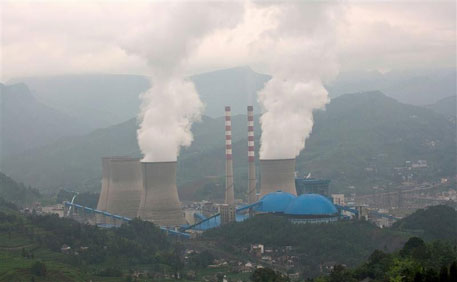 The climate impacts of fossil-fuelled power plants are underestimated because of poor accounting. What’s more, these plants have the capacity to pour more than 300 billion tonnes of carbon dioxide into the atmosphere during their lifetime, says new research. Current monitoring standards are insufficient as they do not take into account long-term emissions. A BBC report observes that governments would get a true picture if they include in their calculation the lifetime emissions of working power plants.

Researchers from the University of California, Irvene, and Princeton University in the US estimate that these “committed emissions” have been growing by four per cent a year from 2000-12, and reached 307 billion tones in 2012. Power plants in China and India alone account for half of this commitment, the report says. This is much higher compared to Europe and the US, which together account for 20 per cent. “The US and Europe, for the most part, have not paid attention that such large consequences were turning up in the development decisions of the developing world,” Prof Robert Socolow from Princeton University told BBC.

The researchers suggest that current United Nations accounting methods, which chart annual carbon dioxide discharge, should also tally the projected lifetime emissions of power plants to provide a more accurate picture of their impact on global warming, says another National Geographic report. The study comes at a time when the US is attempting for the first time to regulate emissions from existing power plants.

According to this report, the study published in the journal Environmental Research Letters  reflects international trends in investment in coal-burning power plants—their construction has been slowing in the West since the 1980s but increasing in China, India and other developing countries.

“There is a global effort to reduce carbon dioxide, but it is actually increasing at a shocking rate,” Steven Davis, one of the co-authors of the study, told National Geogrpahic. “When you build a power plant, it is going to stick around for 40 to 50 years and emit a lot of carbon dioxide.”

Dave Hawknis, director of climate programmes at the Natural Resources Defence Council, says that the study illustrates a concept environmental advocates have talked about for years. “By focusing almost exclusively on annual emissions, the international community has disregarded the impact of investment in new power plants fired by fossil fuels. It is like driving a car and looking out the driver’s window at the ground passing by rather than looking out the windshield,” Hawkins told National Geographic.