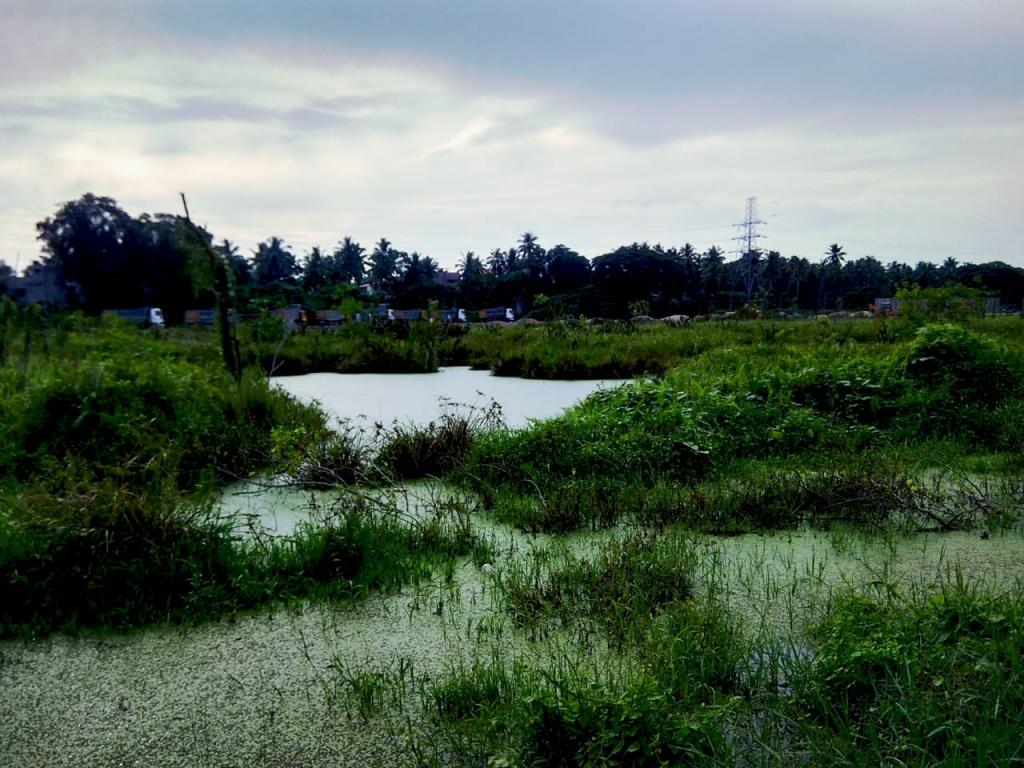 The Kerala government’s collaboration with the United States-based Taurus Investment Holdings LLC, signed about five years ago for the development of Thiruvananthapuram Technopark, was heralded as a new dawn.

The real-estate project, after all, was the largest of its kind in the entire country: The first two phases have employed over 40,000 people and ensured Kerala a prime position on the information technology map.

The Boston-headquartered company had promised to invest Rs 1,200 crore on the project, which was expected to provide direct employment to over 20,000 people. The then chief minister Oommen Chandy had called the project a feather in the cap of Kerala’s development journey.

The regime changed in 2016, within a year of the signing of the agreement, and the Left Democratic Front government with Pinarayi Vijayan as the CM came to power. The company, however, convinced the new government about the need to continue with the third phase of the project.

Despite opposition from a sizable section in the Communist Party of India (Marxist) leadership, the new government consented to the company reclaiming 20 acres of inland coastal wetlands that formed a part of the highly sensitive Veli-Akkulam wetland eco-system for the project.

The company planned to develop over 255,000 square meters of built-up area to house 11 multiplexes, a shopping mall, a five-star hotel and a mega plug and play office. It also involved plans to construct 315 posh apartments in the areas coming between the multiplexes and the mall.

The Veli-Akkulam wetlands. The real estate project posed a threat to the wetlands.

It was around this time when Thomas Lawrence, an IT entrepreneur based out of St Louis in Missouri in the US, returned to Thiruvananthapuram to focus on the environmental and livelihood concerns of the people in and around the city.

Lawrence chanced upon a news item in a vernacular daily explaining how the Taurus project would come up in a reclaimed portion of the Veli-Akkulam wetlands.

Lawrence told Down to Earth:

I could not understand how a Rs 1,200-crore project with apartment complexes, mall, multiplexes and star hotel would boost Kerala’s IT prospects apart from creating job opportunities. I found it quite objectionable to see a wetland ecosystem getting reclaimed and that too, to boost the hospitality business. On closer introspection, I found the development project was nothing but a real-estate plot. There began my long and protracted fight against the project.

Lawrence formed a collective of Thiruvananthapuram-based green activists and social workers to study more about the wetland and the way the project would destroy it.

He also started handing out petitions to different government agencies, ranging from the village officer to district collector and state IT secretary to the chief minister. But nobody was ready to lend a patient hearing, and he soon approached the National Green Tribunal (NGT).

The government and the company, meanwhile, decided to initiate construction without giving appropriate explanation to the tribunal. Lawrence and his friends then approached the SC.

“The Veli-Akkulam wetlands don’t only act as a buffer protecting the surrounding densely populated villages from flooding during monsoon seasons, but also support a thriving biodiversity. I took its protection as my mission,’’ said Lawrence.

The SC, which ordered an interim stay on June 4, 2020, studied the details of the case during the second week of July and validated concerns raised by the petitioner. It stayed any further construction activities related to the IT hub expansion project. The development has turned into a rude shocker for the state government, the Technopark authorities and the US-based company.

As the court order came into existence, the under-construction project, Embassy Taurus TechZone, comprising a special economic zone and a non-special economic zone was almost abandoned. The court intervention saved an old pond, a major stream and a vast wetland ecosystem from complete reclamation.

The 10-acre pond has an exceptional natural beauty and it was frequented by migratory and non-migratory birds including Red Darter and Amur Falcon. The wetland eco-system comprised mangroves and a number of aquatic species. The already initiated construction works have even altered the direction of Thettiyar stream which flows through the area to merge with Akkulam backwaters. The government had leased out the wetland to Taurus for 90 years, even when it is protected by Coastal Regulation Zone Act, Coastal Zone Management Plan and Wildlife Protection Act of 1972.

He added that the area was mapped by the Space Application Centre under the Indian Space Research Organisation and included it in the national wetland atlas by the Union Ministry of Environment and Forests.

The SC also dismissed Taurus’ plea to lift the stay.

“By initiating the land filling works at the proposed site, the company violated Kerala’s Conservation of Paddy and Wetland Act 2008. The court is convinced of that aspect. It was a clear court intervention against a dubious real-estate project prepared under the guise of IT development,’’ said KJ Chacko, a city-based conservationist.

In the petition filed with the SC, Lawrence alleged that Taurus was a real estate brokerage firm with less than 25 employees. According to him, it had no experience in IT and related areas.

How the case evolved

When Taurus sought permission from the Kerala’s revenue department to convert the wetland to a dry land, the village agriculture officer was assigned with to inspect the land and submitted a report citing whether the conversion would be harmful to the environment. The agriculture officer submitted a report to the revenue department citing the illegality involved in reclaiming a crucial wetland area.

The officer also recommended that land reclamation be immedietely stopped. The company then started pressuring the state government, and the chief secretary of Kerala sent a letter to the Thiruvananthapuram district collector asking that the possibility of converting the wetland using exemptions mentioned under Section 10 of the Kerala Paddy and Wetland Act be verified.

Under Section 10, the state government can give exemption to crucial projects from the provisions of this Act. 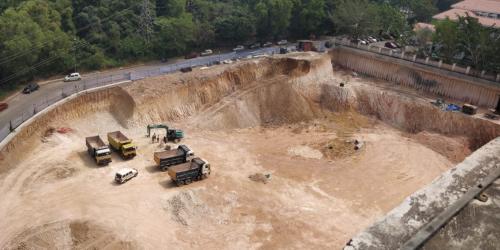 The SC on June 4, 2020 stayed further construction activities related to the IT hub expansion project

The government was duty bound to give the recommendation to a  state-level committee, which had to certify that no alternate land was available and that such conversion or reclamation would not adversely affect the cultivation of paddy in the adjoining land areas.

There was opposition from the agriculture officer and a 12-member expert panel that studied the matter; the government, however, forced the district collector to move ahead with the project.

The district collector issued an order on January 19, 2018, to convert the land by terming it a public purpose. “The collector conveniently forgot that it was a wetland and it must not be converted even for public purposes,” said Lawrence.

“Through an order issued in 2018, the state government exempted some survey numbers in the area from the purview of Kerala Conservation of Paddy Land and Wetland Act 2008. The exemption was given for just 34 cents of land allotted to Winterfell Realty Pvt Ltd, an Indian subsidiary of Taurus. It was done by marking the nature of the land as paddy field in the land data registry. The actual status of wetland was covered up,” said Sushil Thomas Abraham, president, Thiruvananthapuram-based, Save Wetlands International Movement.

He added: “Now the order to convert around 20 acres was issued as a continuation of the order issued in the case of 34 cents of land.”

In May 2018, the local sub-collector wrote to the district collector, saying that the land was watery and permitting constructions there would be illegal.

Kerala was hit by floods in the next three months. The agriculture officer then wrote again to the collector and revenue department saying that any more reclamation works on the marshy land would lead to a large-scale flooding in the nearby areas affecting adversely the lives, livelihoods and possessions of coastal fishing and agrarian communities. 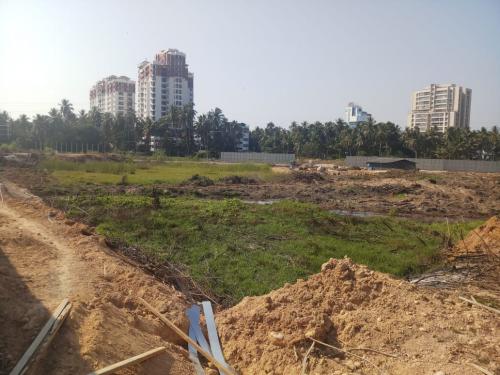 During third phase of construction of the real estate project

Even during the 2019 floods, many local houses were inundated.

The minor irrigation department issued a ‘stop work’ memo to the Technopark in December 2019, citing rerouting of a natural drain in the third face project area. It was the time when Lawrence approached the NGT, which directed the district collector to look into the complaints by the petitioner.

The agriculture officer was deputed to inspect the area again; the officer wrote to the revenue department about the prevailing situation. He briefed the district collector directly.

He, however, wrote to Lawrence claiming there were no violations and that the land reclamation work was undertaken as perfectly in order. This prompted Thomas to approach the NGT and the SC again.

According to SJ Sanjeev, president of Thiruvananthapuram-based Environmental Protection and Research Council, the SC order is a major victory for the safe protection of Veli-Akkulam wetland ecosystem, one of the largest protected inland wetlands in the entire country.

“Even Kerala’s revenue minister E Chandrasekharan has openly responded to the order saying the Technopark authorities had wronged and a departmental investigation would be conducted. But our demand is a through probe into the circumstances in which the then district collector facilitated the illegal constructions. That would help reveal all illegalities behind this blatant land scam,” he said.

Despite repeated attempts, local representatives of Taurus did not respond to the court order. DTE sent an email to the company headquarters seeking a response. The copy will be updated as when a reply is a received.