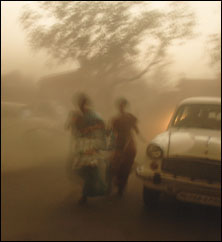 There  was a time when desert in India was synonymous with the Thar in Rajasthan. But the sands have flown across—unchecked and uncontained—and taken over parts of Haryana, Punjab, Uttar Pradesh and Madhya Pradesh as they advance by half a kilometre every year. There would soon be more contenders on the map of India: parts of the Eastern Ghats, the Western Ghats and the Western Himalayas are going down the same road.

The Indian Space Research Organisation (isro) has developed a degradation status map, the first of its kind in India, that hints at the extent of degradation.


isro used a series of images taken by the Advanced Wide Field Sensor on board the Indian satellite, irs P6-Resourcesat-1 of the country’s geographical areas between 2003 and 2005. The map shows an alarming 32.07 per cent of India’s lands are degraded and 24. 78 per cent, desertified. Rajasthan is the worst hit. The National Bureau Of Soil Survey and Land Use Planning said the Thar has become bigger extending from an area of 1,96,150 sq kms in 1996 to 2,08,110 sq kms at present.

Human activities like mining, deforestation and unsustainable agricultural practices are to blame. They lead to vegetal degradation, salinization and alkalization and waterlogging. These, in turn, are the various means by which lands are abused. The study, published in the November 25 issue of Current Science , explains how these rogue processes are at work: the Aravalli slopes along the eastern margin of the Thar Desert are being denuded because of over-exploitation of natural vegetation cover for fuel wood and fodder. Vast areas in the Indo-Gangetic plain in Haryana, Punjab, Uttar Pradesh and coastal regions of Gujarat have lost their productivity due to increased soil salinity, said lead author, A S Arya Ajai.

Natural processes such as water and wind erosion also play a part. About 9.47 million hectares of land has been degraded due to frost shattering. In this water enters cracks in rocks during the day and during the cold night it freezes. Thereby pressure is exerted on the rocks causing the cracks to widen and shatter the rocks into pieces. Frost shattering is a common occurrence in the mountainous regions of Uttarakhand, Jammu and Kashmir, Arunachal Pradesh and Himachal Pradesh.

Farmers would soon have to deal with more barren lands. This year in India rainfall was 29 per cent below average, said G C Debnath, director of the Indian Meteorological Office. Rainfall is predicted to fall in shorter, more intense bursts over several regions in the near future. “This would mean more powerful surface runoff and greater soil erosion,” said Subrata Sinha, former chief of Geological Survey of India. About 5.3 billion tonnes of soils are eroded each year. This figure is expected to increase.

As more of India’s arable lands degrade and turn into deserts, food security would be compromised. Competition for dwindling resources would increase thus sowing the seeds of potential conflicts, warned Selim Kapur from the department of soil science at the Cukurova University in Turkey.

But some environmentalists are hopeful. The damage is not irreversible yet, they say. Land degradation can be controlled with stepsb taken on time. “There is a common misapprehension about desertification—that it spreads from a desert core like a ripple on a pond. Truth be told, it begins as a spot where land abuse has become excessive. From that spot, which might even be in a cultivated field, it spreads if the abuse continues,” said Brian Marker, chairman of the International Working Group on Urban Ecology in UK.