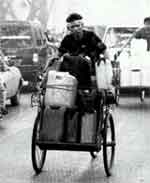 After a three week assessment of Indonesia's food and crop supply, a joint team from the Food and Agriculture Organisation and World Food programme have reached the conclusion. The Indonesian government has carried out emergency food drops in several provinces, including East Kalimantan where drought and more than 1,000 raging fires have devastated crops and caused water shortages. In Irian Jaya, a remote province, thousands of people have died due to drought, said foreign aid workers.

Nearly 149,330 families in the provinces of Sarangam, South Cotabato and Sultan Kudarat have been hit by a prolonged dry spell induced by the El Nio weather phenomenon, said the Provincial Disaster Co-ordinating Council and the Chamber of Commerce in the southern city on Mindanao island. Crops had failed in 35,851 hectares of land used to grow rice and corn. El Nio had affected 90 per cent of the Philippine archipelago, with rainfall less than half of the normal, said a government weatherperson.