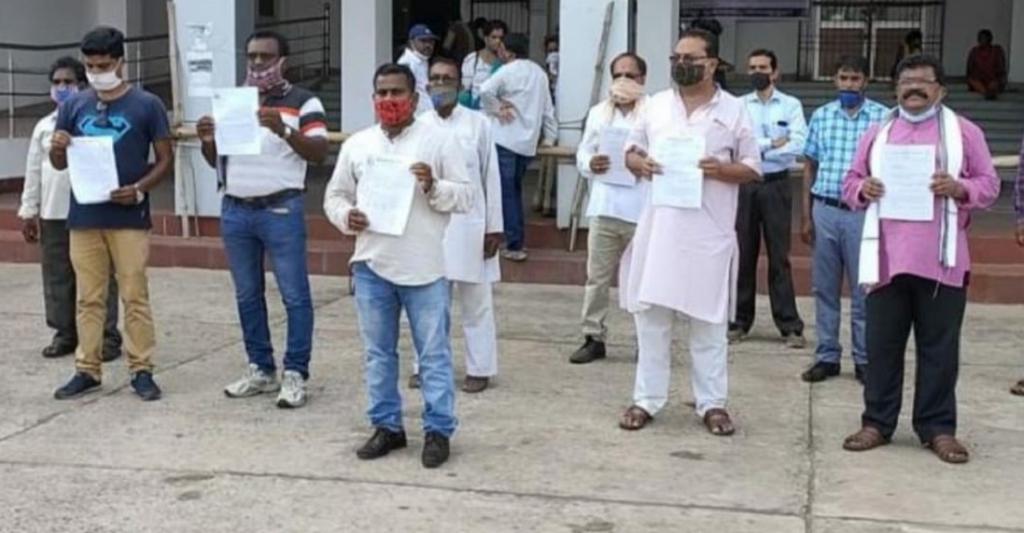 Activists holding copies of memoranda that they submitted to the Jharsuguda collector October 12 on holding a fresh public hearing about Vedanta’s smelter expansion. Photo: Amjad Badshah

Political party cadre as well as representatives of tribal organisations submitted memoranda to the collector of Jharsuguda October 12, 2020. They demanded a fresh public hearing on the expansion of Vedanta’s aluminium smelter plant in Jharsuguda.

The collector’s office could release an order regarding the Orissa High Court (HC) directive on holding a fresh public hearing October 13, according to sources.

The Orissa High Court had asked the collector to respond within a three-day period ending October 12. The HC’s directive came after a petition was filed by Subrat Bhoi and Tejram Kumura, both residents of Brundamal village, which will be affected by the expansion.

The petitioners had appealed for a fresh public hearing as the previous one did not have sizeable public participation in proportion to the population of the five surrounding villages around the plant.

Prafulla Kumar Rath, the counsel of the petitioners, had pleaded before the HC that only 90 people had participated in the hearing from a population of 10,000.

The single-judge bench of KR Mohapatra then disposed of the petition with the observation that:

There is no material available before the Court to test the veracity of the same. If that be so, then petitioners may make a representation to the Collector, Jharsuguda within a period of three days by October 12, who shall consider the same and pass necessary orders thereon in consultation with the stakeholders, if necessary, by taking steps to hold another public hearing

The petitioners then approached the Jharsuguda collector with a written memorandum, asking his intervention in light of the court.

The petitioners had earlier filed a petition through their counsel Partha Sarathi Nayak, asking for the court’s intervention for postponing the public hearing till the novel coronavirus disease situation normalised.

But in a dramatic development, the bench September 29 first issued an interim stay that was to be held on September 30 in pursuance of the advertisement issued by the Odisha Pollution Control Board August 27.

Thereafter, the court partially modified the order at 2 pm September 30 and directed that “the public hearing may continue but no final decision shall be taken till the next date”. The administration was able to organise a public hearing at 4 pm September 30 about Vedanta’s bid to expand its existing alumunium smelter to 18 LPTA, from 16 LPTA, in the presence of the police and administration.

The hearing was organised at Government UP School, Dalki, in batches as there were restrictions in place over large conglomerations.