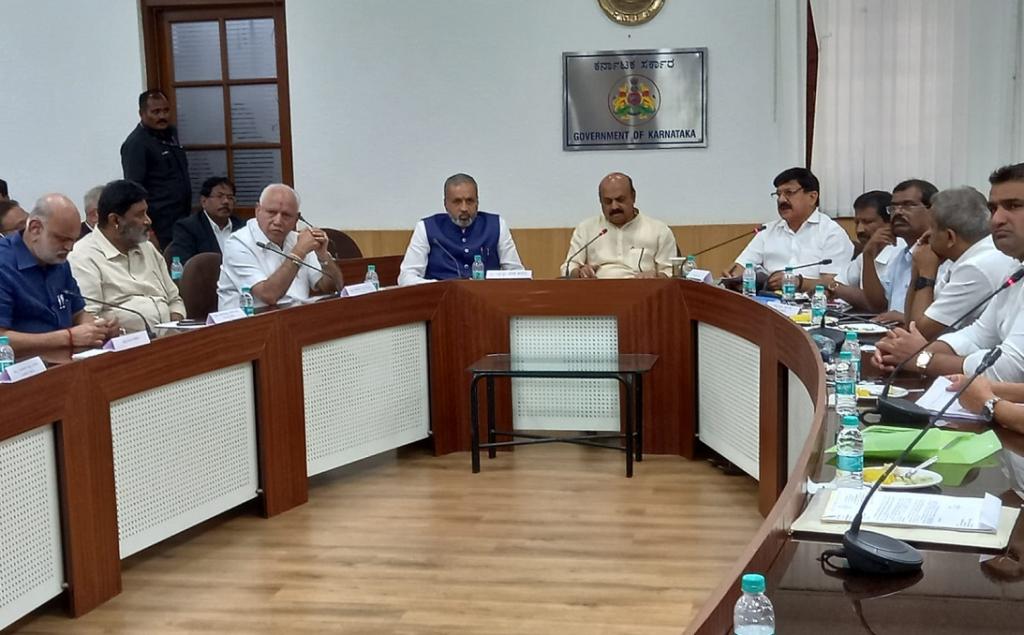 Ministers and legislators from the hilly and coastal regions of Karnataka decided to fight a legal battle against the notification regarding the Western Ghats issued by the Union environment ministry, in a meeting chaired by state home minister Araga Jnanendra July 18, 2022.

The Union Ministry of Environment, Forests and Climate Change (MoEF&CC) re-issued a draft notification July 6, for the Ecologically Sensitive Areas (ESA) in the Western Ghats.

The ESA are spread over 46,832 square kilometres (sq km) across Gujarat, Maharashtra, Goa, Karnataka and Tamil Nadu. Of the five states, Karnataka has the highest area under ESA with 20,688 sq km.

Jnanendra addressed the media after the meeting and called the Kasturiranga Report ‘unscientific’. He said the Karnataka government would not accept the Kasturirangan Report.

He added that a delegation of members of the Legislative Assembly (MLA) constituencies in the Western Ghats will meet Union environment minister Bhupender Yadav and request him to drop the Kasturirangan report and the draft notification of the ESA.

The 30 MLAs from the 10 districts falling under the ESA, who met Jnanendra in Bengaluru, called draft notification a threat to livelihood of local communities.

The draft notification has identified as many as 1,572 villages in 10 districts of Karnataka that will fall under the ESA.

However, according to the notification, the “actual area will be finalised based on the recommendations of the State, views of stakeholders and ESZ expert committee”.

However, Karnataka-based environmental activist Akhilesh Chipli told DTE that all this resistance was because of big mafia like sand and cement and construction firms that were trying to create a political drama to oppose the ESA.

“The livelihood of the people will not be affected as the draft notification does not ban farming or collection of forest produce or right to water resources. Many people are spreading rumours that if the ESA is declared and if their homes break due to natural calamities, they will not be able to reconstruct them.

“The declaration of the ESA will only put restrictions and ban on orange and red industries. The locals can continue with their lives as usual,” he said.

Another environmental activist Sahadev Shivapura said these were tactics to scare local people and continue with operations like sand and stone mining and other such activities in the name of development.

“All these draft notifications and reports are only published in Hindi and English. So the local people are unable to read and understand them and it becomes easy to scare and misguide them,” he said.

Shivapura added that the local politicians were colluding with the construction and mining mafia in the area for their own vested interests. They were using local people by spreading rumours that they would go landless and would lose everything, including their livelihoods, he said.

The Kasturirangan Committee had been set up in August 2012 by then environment minister Jayanthi Natarajan as a high-level working group on the Western Ghats to “examine” the Madhav Gadgil Committee report in a “holistic and multidisciplinary fashion in the light of responses received” from states, central ministries and others.

The area for ESA was proposed by the Kasturirangan Committee which included 37 per cent of the area of the Western Ghats, amounting to 60,000 sq km area.

The draft notification does not apply to Kerala, which has undertaken the exercise to demarcate a 9,993.7 sq km area under ESA by physical verification.

Shivapura added, “The fact that they are all referring to the draft notification as the Kasturirangan Report shows that they have not even read it.

“The notification is a diluted version of the Kasturirangan Report. Neither the report, nor the draft notification talk about banning local livelihood practices like farming or evicting the local people from their land.”