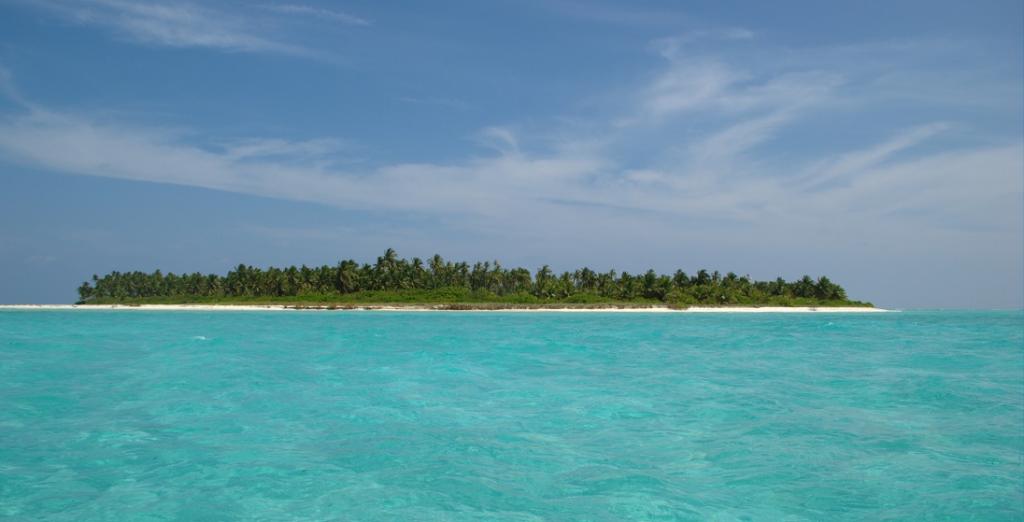 An uninhabited atoll in Lakshadweep. Photo: Lenish Namath via Wikipedia

The new laws recently brought about in the Union territory of Lakshadweep were a calculated attempt to alter the habits of people evolved over generations, residents of the Arabian Sea archipelago have said.

These have been criticised. Many islanders fear will they permanently ‘alter their culture’ if implemented.

The present administrator has launched an outright attack on the land rights of the local community. The draft Lakshadweep Development Authority Regulation would cause removal or relocation of people from their property for town planning or other developmental activities. If he does so, it will adversely impact the livelihood of the tiny fishing community.

“What is happening here is a calculated effort to alter the habits of people evolved over generations,” he added.

Patel had already stopped non-vegetarian items in the mid-day meals for school children and in government-run hostels. He was also banning the slaughter of cattle, transportation, selling and buying of beef.

Alcohol sale has been prohibited in the islands, given the religious and cultural sensibilities of the local community. At present, permits for the sale of liquor are getting issued in four islands in the name of promoting large-scale tourism activities. The existing panchayat law is now getting amended to prohibit anyone with more than two children from contesting elections, an apparent move against Muslims. This again is motivated by the stereotype of Muslims having more than two children.

There were also attempts to cut-off the traditional trade links of the islands with Kerala. “Ships from the islands used to take cargo to Beypore port in Kozhikode district. Now, orders have been issued to divert such transit ships to the Mangalore port in Karnataka,” he said.

Patel was the home minister of Gujarat under then Chief Minister Narendra Modi in 2012. He is the first politician since 1947 to be appointed administrator of Lakshadweep. His predecessors were all civil servants.

Among the most powerful and damaging could be the draft Lakshadweep Development Authority Regulation 2021. It provides for the development of townships as well as acquisition, alteration and transfer of landed properties owned by Lakshadweep residents.

Smitha P Kumar is an educationist and writer who taught in Lakshadweep for a long time. She said Patel’s plans to facilitate mindless tourism by allowing substantial private investment and corporate operations would negatively impact the archipelago’s fragile environment and livelihood.

Large-scale developmental activities like coastal constructions, huge ship traffic, beach side resort tourism and beachside fishing will cause large scale livelihood pressures on the local community. The islands require responsible tourism, which is minimum and reasonable with keeping larger interests of the local community in mind.

Another legislation that is in the throes of a controversy is the Lakshadweep Animal Preservation Regulation, 2021. It bans cow slaughter in addition to the buying, selling, transportation or storing of beef or beef products in any form.

In addition, non-vegetarian food has been removed from school midday meals and hostel dining halls.

“We want to preserve milch cows,” Lakshadweep Collector S Asker Ali told the website The Print. But, his words ring hollow as Lakshadweep is an overwhelmingly Muslim society. Critics have said the laws have been brought because of old prejudices regarding Muslims among people of a Bharatiya Janata Pary background like Patel.

Kochi-based conservation activist and environmental lawyer Harish Vasudevan also points to something else:

The islanders’ precarious livelihood and the diverse ecosystems of which they are a part need official recognition rather than altering the midday meal menu of local schools and enforcing a ban on cow slaughter. Now, there are attempts to prevent people from rearing cows for milk and meat. This, even as Gujarat’s cooperative giant Amul is attempting to take sole control of all milk-related needs of the islands.

Ali Akbar is a resident of Kavaratti, the capital of the Union territory. He said the administration’s decision to close down dairy farms and open Amul outlets can be seen as part of a larger plan to alter the food and living choices of the local community altogether and to facilitate the entry of dominant players from outside into the hitherto small economy of the islands.

Akbar said the present controversial actions of the administrator were just a cover-up to the unilateral tourism plan, which would ultimately destroy the very identity of the islanders.

He said efforts were already on to implement a large tourism project involving the construction of beach and water villas with 370 rooms.

The project has been mooted by NITI Aayog and the Union Ministry of Home Affairs, reportedly under pressure from corporates.

Last January, 114 scientists hailing from over 30 universities and research institutes across the country had urged the Union territory administration to abandon the controversial project, keeping in view of the possible ecological impact it would have on the region’s highly fragile lagoons and beaches.

The introduction of liquor and large-scale tourism could have large-scale social and environmental impacts.  The islands face waste disposal as a significant problem, affecting the water quality. Tourism has increased the presence of micro plastics in the seawater, affecting fish health. More tourism will ensure more such disasters, warn conservationists.

The political controversy comes even as the fragile archipelago has had to deal with a number of natural disasters recently.

The Union territory located about 200 km from the west coast of Kerala in the Arabian Sea, comprises 16 atolls and 32 islands. However, human presence is limited only to 11 islands.

All the islands are northeast-southwest in orientation, and they are characterised by shallow lagoons on the west and steep reef slopes on the east. These peculiarities provide a perfect haven for several marine flora and fauna.

The density of the human population in Lakshadweep, unlike other states and Union territories, is also significantly less than the national average.

But, in recent years, the fragile archipelago had faced significant climate change-related disasters. In 2017, Cyclone Ockhi had caused large-scale destruction.

Now, during every (southwest) monsoon, surging storms damage the islands.  Large-scale coral bleaching events reported in 2013 and 2016 are another threat the islands face in the environmental sector.

On May 31, 2021, the legislative assembly of Kerala, the state with which the archipelago’s residents share ancestral and cultural links, unanimously passed a resolution.

It demanded Patel’s recall and requested the immediate intervention of the Centre to protect the lives and livelihood of the islanders.