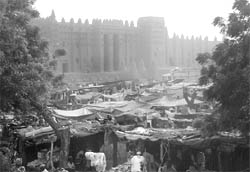 The Mali government has reaffirmed its commitment to a controversial dam project, which threatens the Djenn town. The multimillion-dollar Talo dam will be built on the river Bani. The dam is being constructed to raise the level of Bani, upstream of Djenn. Though an environmental impact assessment ( eia ) was conducted, it only covered upstream areas and no mention was made of possible effects downstream.

"The dam will have a devastating effect on the environment. Along with this, at least 40,000 people will face famine following its construction and the town of Djenn will be deserted," said Ian McIntosh, director of Cultural Survival, an us -based non-governmental organisation. Even the African Development Bank, the funding agency of the project, has raised concerns about the dam. "Executives of the bank agree that the eia was flawed," said McIntosh.