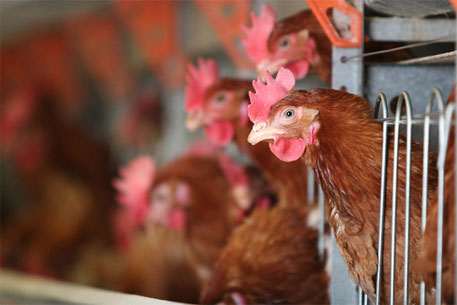 The Food and Agriculture Organization (FAO) has urged countries to give sustained support to animal disease monitoring systems, which plays a crucial role in preventing human disease threats.

Speaking at a recent meeting of the Global Health Security Agenda (GHSA) in Jakarta, Indonesia, FAO Chief Veterinary Officer Juan Lubroth told ministers of health and agriculture present on the occasion that animal health remains one of the weakest links in terms of dealing with disease risks, an FAO press release says.  To drive home his point, Lubroth highlighted the Ebola outbreak in West Africa as a “tragic reminder” of the need to monitor and respond to animal health diseases. The Ebola virus, which has claimed more than 1,400 lives so far, is believed to have crossed over to the human population from infected wildlife.

An FAO report published last year highlighted that 70 per cent of new infectious diseases detected in recent decades are of animal origin. Besides Ebola, avian influenza, Severe Acute Respiratory Syndrome (SARS) and Middle East Respiratory Syndrome (MERS), which affect humans, are believed to have had their start in animals.

Preparedness is the key
Lubroth said that understanding animal health threats will help prevent human tragedies from happening. “To be more resilient in the face of such risks, countries need the resources to be able to better understand where a disease is coming from and to prevent it from ever reaching people in the first place,” he said.

To achieve this transition, FAO and its partners are advocating what is known as the “One Health” approach, which looks at the interplay between environmental factors, animal health and human health and brings human health professionals, veterinary specialists, sociologists, economists and ecologists together to work on disease risks in a collaborative way, says the press release.

During the two-day GHSA conference in Jakarta, which began on August 20, some 60 countries as well as international organizations like FAO, the World Health Organization and the World Organization for Animal Health, got together to discuss ways to take this approach forward. GHSA is an international effort to strengthen health systems to help prevent, detect and respond to emerging disease threats. During the international conference, FAO also highlighted how animal and human diseases have broad impacts on societies, including reduction in food production and food availability and disruptions to rural economies and livelihoods that can linger for years.