Thirty-three miners, who got trapped as San Jose copper-gold mine in Chile caved in on August 5, received the first batch of glucose, saline and medicine on August 24 through a narrow drill hole. The authorities said the miners are in a shelter 688 metres below several layers of hard rock. Evacuating them by drilling a shaft from a nearby mine would take four months.

A three-year UN investigation has exonerated Shell of nearly all pollution and human rights violations in 40 years of its operations in the Niger Delta. The report said Shell caused only 10 per cent of the pollution. The company taps 40 per cent of Nigeria's reserves. Green groups and Nigerian communities, who had campaigned to force the oil giant to clean up its spills and pay compensation, allege Shell funded the investigation.

South Africa halted raw wool and mohair exports to China saying it cannot guarantee the yarn is sourced from areas free of rift valley fever. The haemorrhagic fever infects livestock and can be passed to humans. China is the only country that asks for a certificate to show the yarn is free from the mosquito-borne disease.

The Kenyan authorities seized two tonnes of ivory and five rhino horns from the Nairobi airport inside boxes labelled as avocados to be exported to Malaysia. Illegal ivory trade in southern Africa has grown in the past year following one-off sales of ivory stockpile by several governments.

Over 60 per cent of corals off the Indonesian island of Sumatra got bleached in May when the sea surface temperature rose 4oC above the average 30oC. Wildlife Conservation Society which surveyed the area said the colonies would die in the coming months. High sea temperature kills the algae with which corals

exist symbiotically, resulting in bleaching and then death.

The population of panda dolphins, restricted to the southern tip of South America, has declined 75 per cent in 10 years. Conservationists say the mammal is failing to adapt to the changing environment due to its low genetic diversity.

Flouting EU's fishing quotas for the North Atlantic, Iceland and Faroe Islands have unilaterally fixed for themselves the lion's share of the stock, hiking it from 27,000 to 215,000 tonnes. The UK has called for EU action. WWF said such arbitrary quota would spell the death of mackerels, whose stock has just revived.

Scottish researchers have developed biofuel from the by-products of whisky and said it could be available at fuel pumps within a few years. They have produced butanol, which generates 30 per cent more power than traditional biofuel, ethanol. Whisky is made from grain.

Detectable amount of bisphenol A is present in 91 per cent of Canadians, said a government agency following a nation-wide survey. Used in plastic bottles and as food-can lining, the chemical can affect neural development and cause cancer. Canada banned bisphenol A in baby bottles in 2008.

Criticising a US government report that claimed three-quarters of the oil leaked from BP's underwater well had disappeared, scientists from University of Georgia, USA, said 79 per cent of the oil is still present in the gulf. Only the slick on the surface has disappeared.

Australia heads for a hung parliament with none of the two major parties garnering sufficient votes. Analysts say the electorate wanted to punish the parties for appeasing industrial lobbyists. Dubbed climate election, 70 per cent of the votes the ruling Labor Party lost went to the minority, The Greens.

The UN launched a 10- year campaign to fight desertification, threatening a-third of the earth. It plans mass plantations and check logging and over-grazing. 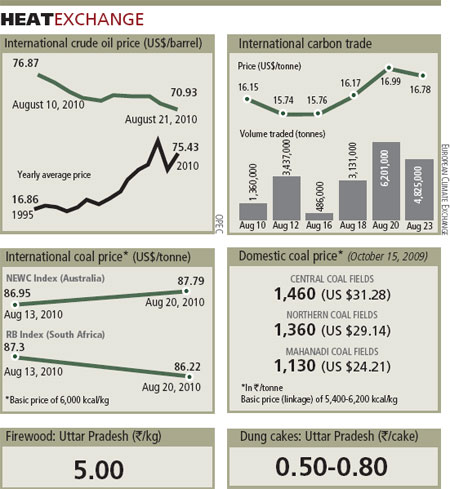