Once upon a time

The establishment of a research station called the Zackenberg Ecological Research Operations (ZERO) marks Denmark's maiden effort to study climate change. ZERO hopes to provide valuable information on the region's ecology apart from being of service to the world scientific community 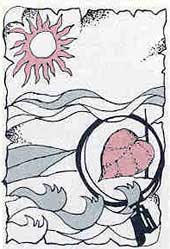 MANAGED by the Danish Polar Centre - a monitoring and research body in the country -ZERO is located in the Zackenberg mountains of the national park (NP) in northeast Greenland. According to scientists at the station, the pristine conditions of the park will prove to be an excellent site to gain insight into what the environment might have been like before climatic changes were ushered in. It also provides an ideal ground for recording the impact of even the smallest change in the environment (Danish Environment, No 4).

ZERO is expected to accomplish three main tasks: to study the dynamics of an undisturbed ecosystem and any changes taking place therein due to global environmental influences, to encourage international research on the ecosystems of the high Arctic, and to contribute to research on the NP according to the shared mandate the United Nations Educational, Scientific and Cultural Organization. However, the success of the mission crucially hinges on the assumption that careful records of the ecological structures of the past have been maintained for comparative purposes.

Hans Meltofte, who is going to man the station, will be assisted by other scientists from the Copenhagen University. Their first task will be to set up a data bank containing all possible information on the natural conditions of the 80,000 ha earmarked for the study. Following this, the scientists will collect information on factors like climate and soil conditions, water flow in rivers, climate-induced changes in the terrain, and on selected plants, mammals, insects and fish. These studies would help explain the natural variation in plant and animal species, their inter-dependence and adaptibility. ZERO would also be providing information to the Arctic Monitoring Assessment Programme (AMAP). The AMAP defines and describes the impact of trans- boundary pollution on the ecosystem of the Arctic region.

Inspite of the fact that the station is yet to be constructed, scientists have already been on the job since last summer. Their research has assumed this sense of urgency due to the limited spells of summer enjoyed by the region. There is an added possibility that the team may want to collect the maximum possible information before climatic changes set in.

ZERO is also planning to offer its services to scientists from all over the world, throughout the year. The station hopes that the information collected by its scientists will help not only fellow scientists but also governments responsib1e for keeping pollution under control.