Pollution not under control 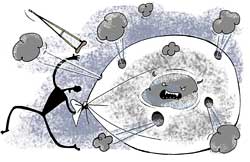 It's official. The Central Pollution Control Board (cpcb), the nodal body for regulating environmental norms in India, is being "reduced to a near-defunct body". The parliamentary standing committee on science and technology, environment and forests for the first time took note of the problems ailing cpcb in a report tabled in Parliament on October 21.

Issues like unqualified members and lack of enforcement power have long plagued the central and state pollution control boards (spcbs), a fact acknowledged by the board heads. The committee also noticed that the scarcity of technical staff was affecting the functioning of the boards. "The key posts in cpcb and spcbs are being manned by officers of the Indian Administrative Service or bureaucrats who neither possess the necessary capabilities and expertise in properly managing and planning pollution control activities nor have enough time to pay attention to these activities," the report said.

In 2004-05, of the total cpcb and spcb staff, only 48 per cent were technical. An earlier report by a Supreme Court monitoring committee had stated that 77 per cent of the chairpersons and 55 per cent of the member secretaries of spcbs were not qualified to hold the post. The parliamentary committee report also criticized having part-time chairpersons by many state boards and said that only a full-time chairperson with adequate knowledge, background and experience in environment management could do justice to the post.

Dilip Biswas, former chairperson of cpcb, said during his tenure he had quite a few members on the board who were unqualified for the post. "Meetings were more like a ritual than platforms for discussing important issues because many members were illiterate as far as environment was concerned. Many a times they would not even turn up for meetings." The law was to be faulted, said Biswas not the people as it did not define the exact qualifications of the board members. "Also, there is drastic shortage of general staff," he said.

Though cpcb is an autonomous body, it is controlled by the Ministry of Environment and Forests. Most of its members are ministry representatives. The acting chairperson of the board is the joint secretary of the ministry. The Water Act, under which the board was formed, allows the Central government to supersede cpcb in certain cases. "Such a provision renders cpcb to act as mere puppet in the hands of the Centre and does not allow any space for independent and autonomous functioning," the report said. Citing the ministry's 2002 decision to delegate punitive powers to cpcb with the condition that if need be the Centre may revoke the decision, the report said, "If all the powers and functions were to be concentrated in the hands of the ministry ...such an apex body is untenable."

The report has raised concerns about the cpcb data on air and water monitoring. It said hazardous pollutants like volatile organic compounds, ozone and aromatic hydrocarbons were not being monitored. Of the 332 monitoring stations in the country, several are not working and the data is not updated regularly. There is no central agency to set standards for emissions. Even if the standards are finalized by a technical body, the ministry takes a long time to notify them, as has happened in the case of the sponge iron industry.

Low salaries to the technical personnel and lack of training also contributed to cpcb's failure, it stated.