Will elimination of tariff on environmental goods open up markets for industrialised nations? 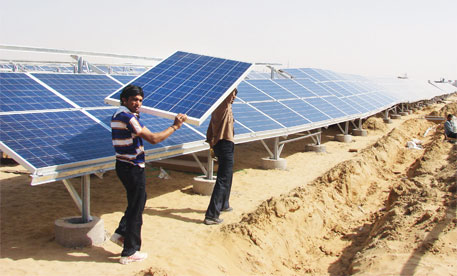 ON JANUARY 24, a group of countries, including the US, Canada, Australia, China, and members of the European Union, issued a joint statement proposing the elimination of tariffs on environmental goods to facilitate free global trade. The proposal, presented at a meeting of the World Economic Forum at Davos in Switzerland, has caused a stir in some developing countries, including India, which see it as an attempt by developed nations to gain access to their markets. Experts of international trade have also criticised the move, saying that the list of 54 so-called environmental goods, proposed to be freed of tariff, is controversial because there is no agreement on what exactly are environmental goods.

Environmental goods are broadly understood as those which reduce pollution or transform a pollutant into something which is more benign. But there is no universally accepted definition of them. Economic bodies such as the World Trade Organization (WTO), Asia Pacific Economic Cooperation (APEC) and Organization for Economic Cooperation and Development (OECD) have prepared their own lists of environmental goods, but none is universally accepted.

The joint statement by 14 countries, who are members of WTO, mentions that trade tariffs should be eliminated on all 54 environmental goods identified by APEC, a group of 21 countries located around the Pacific Ocean. The statement reads, “We are convinced that one of the most concrete, immediate contributions that WTO and its members can make to protect our planet is to seek agreement to eliminate tariffs for goods that we all need to protect our environment and address climate change.”

The statement gives no timeframe for negotiations.

In 2011, APEC had agreed to reduce tariffs to five per cent or less by 2015 on the list of 54 environmental goods. “Global trade in environmental goods totals nearly US $955 billion annually. Some countries currently apply tariffs as high as 35 per cent. Tariffs add unnecessary cost to green technologies needed to protect the environment,” says Michael Froman, US trade representative.

India is sceptic about the recent development at Davos. “The move is nothing but another disguised attempt to gain market access in developing countries,” says Rajiv Kher, secretary, Ministry of Commerce and Industry and India’s chief negotiator at WTO. Elimination of tariff makes imports cheaper and may affect the production and research of these goods if in their nascent stage in importing countries. Abhijit Das, director, Centre for WTO Studies at the Indian Institute of Foreign Trade (IIFT) in New Delhi, agrees with Kher. It is more an issue of securing markets than actually being concerned about the environment, Das adds.

Free trade experts say developed countries often have a sectoral agenda to enter markets. Under the Non-Agricultural Market Access draft floated in 2008, WTO members identified 14 sectors where they wanted elimination of tariffs. These sectors include electronics, industrial machinery, forests, automotive and related parts. But developing countries objected as elimination of tariffs would have resulted in loss of revenue and domestic jobs. The proposal was put on the backburner.

The lists of environmental goods prepared by APEC and OECD mostly consist of goods that developing countries import, Kallummal observes in his working paper.

The development at Davos is not new. The first negotiations on environmental goods took place at a WTOÃ”Ã‡Ãªmeet in Doha in 2001, which called for “reduction or, as appropriate, elimination of tariff and non-tariff barriers to environmental goods and services”. The declaration, however, neither defined environmental goods nor the timeframe to achieve this. Since then the issue has been negotiated quite a few times but no consensus was reached. This is primarily because there is no accepted definition of environmental goods.

Ilana Solomon, director of trade programme at the US-based environmental non-profit Sierra Club, has analysed APEC’s list. “Some of these products, if allowed to be traded, will actually harm the environment than do any good,” she says. Incinerators, for example, which are used to burn waste material, release toxic chemicals and byproducts into the air, water and ground. Centrifuges, which are used to filter and purify water, can also be used in the production of dirty fuels such as oil and tar sands, Solomon points out.

Aparna Sawhney, associate professor at the School of International Studies in Jawaharlal Nehru University, Delhi, says dual or multiple uses of environmental goods have been one of the highly debated issues. A product which may be called environmental could have other uses. For example, machinery for liquifying gases can be used in various industrial processes, not just for air pollution control. “Some developing countries argued that only goods with single environmental use should be included under environmental goods. However, culling out such a set is not possible as the current system in WTO does not allow for such a fine classifiction of goods,” she adds.

Experts say negotiations cannot move forward unless there is clarity on the definition. Kher suggests a project-based approach that India had proposed at a WTO meet in 2005 which is still on the negotiation table. “If we identify a project as environmental, then anything that is traded for that project would be called an environmental good,” he explains.

Sawhney also talks about an alternative approach possible within WTO.