Three areas narrate three different stories. Palanpur village, in Uttar Pradesh’s Moradabad district, has been a subject for researchers for over 60 years. The anthology of data now represents how India has changed over the years. Green Revolution started from Jaunti village, on Delhi’s outskirts, but farmers are shifting to non-farming jobs, just as they are across India. Affluent South Delhi, picked by WHO for making the global growth chart, shows that India can nurture healthy children

All houses in Palanpur have unique numbers painted on the doors by researchers who have been coming to study the village for over 60 years (Photos: Vikas Choudhary)

Last year, 45-year-old Hardwari Lal earned Rs 18,000 from the wheat he grew on his farmland. He had invested Rs 15,000 on seeds, fertilisers and irrigation. The amount does not include labour cost. He will have to put in a similar amount on the next crop. In no way can Lal run his family of five with such a meagre annual income.

He was forced to sell off a part of his land in November last year. He spent some of the money on his eldest daughter’s wedding and on repaying loans. He has kept the rest for the wedding of his three younger daughters.

Lal’s story is not unique, but his village Palanpur is. In the past six decades, this village, 220 km from Delhi, in Uttar Pradesh’s Moradabad district, has been the centre of activity for the world’s top-notch development economists and researchers. They have managed to build a thick database in Palanpur that can help analysts understand what drives or derails the country’s economy. 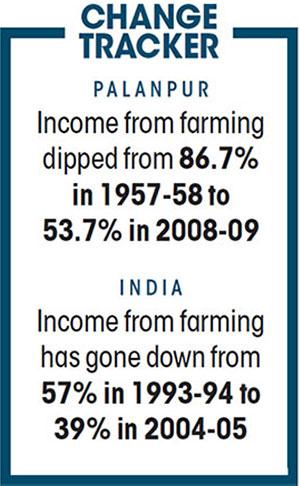 In 1957-58, when the Agricultural Economics Research Centre of Delhi University chose Palanpur for a study, it was not unique in any way.

The centre conducted a second study in 1962-63. These were reported in 1964 in Palanpur: A Study of its Economic Resources and Economic Activities by Nasim Ansari of the Delhi School of Economics.

In 1973, economists Nicolas Stern and Christopher Bliss also picked this village to understand its economy.

“It had ready data from previous years, so making comparisons was easy,” says Bliss. In 1998, Peter Lanjouw and Nicholas Stern’s Economic Development in Palanpur Over Five Decades was published by Clarendon Press.

Residents are quite excited that “foreigners” come from France, Russia and England and live amongst them for days. They boast about the unique numbers provided to each house during the research work, which are painted on their doors. But they are clueless why these people are so interested in them.

They cannot understand why their income, investment or the number of cattle they possess would be worth anyone’s interest.

They do not know that their village now represents the state of affairs across the country. Palanpur has a population of 1,255 and is as diverse as the country.

It has a good mix of castes like Thakurs, Muraos and Jatabs. There are 10 per cent Muslims in the village. 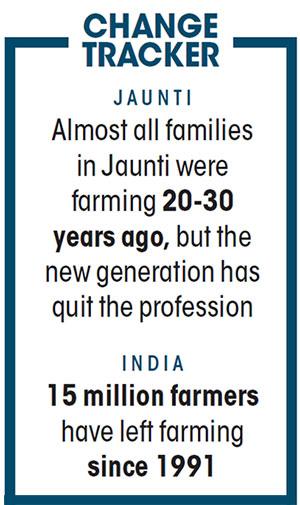 In 2015, Stern and Bliss again conducted a research along with Himanshu of the Jawaharlal Nehru University. They found that in 2008-09, a good 46.36 per cent of Palanpur’s income came from the non-farming sector.

Sixty years ago, the village’s income was heavily dependent on agriculture and only 13.23 per cent of the total income came from outside the farms.

“Mechanisation in the farming sector, as also reducing incomes from farming, brought the change,” says Himanshu, lead author of the study published by the Oxford University Press in 2018.

It shot up after the mid-1980s, when the country witnessed major changes such as farmers shifting away from agriculture, faster urbanisation and so on.

In the next 25 years, incomes grew two per cent per annum. The village’s data represents the country’s status where farmers are quitting farming and taking up non-farming jobs as it gives them better returns.

It shows that the Green Revolution, which gave farmers a glimpse of prosperity, had failed to sustain their livelihood. 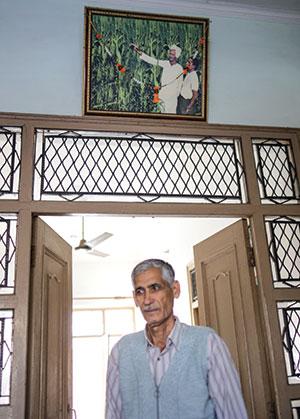 The Revolution that began and died in Jaunti

In the mid-1960s, when scientist M S Swaminathan decided to import high-yielding, early-maturing and disease-resistant seeds from Mexico, he chose Jaunti village as the testing ground for the Green Revolution.

The village was conveniently located — on the outskirts of Delhi and only about 30 km from the Indian Agricultural Research Institute, Pusa.

The farmers themselves were enthused by the prospect of experimenting with a new variety of wheat seeds. The result was miraculous.

“Yield shot up from eight quintals per 0.4 hectare (ha) to 24 quintals,” says 87-year-old Hukum Singh, once the village head. Residents recall that when the minimum support price of wheat was just Rs 76 per quintal, the seeds produced in the village sold at Rs 300 per quintal.

Soon, the nondescript village became the epicentre of a revolution that promised prosperity to farmers, and therefore the country.

Cut to 2019. Farmer Raj Singh tolerates cattle grazing his 28 ha of fully grown carrots. He knows the carrots will not fetch him even the input cost. Last year, unusual hailstorms ruined his wheat and mustard crops.

Fifty-five-year-old Sansar Singh complains his crop yield has reduced 30-40 per cent from the glorious times of the Green Revolution. Now he neither gets good seeds nor enough water for the crops.

One basic requirement for the high-yielding seeds is ample water—farmers cannot depend exclusively on the rains.

Jaunti once had enough water. It now reels under an intense water crisis. Jaunti Minor Canal, built in the 1960s, irrigated the fields. About a decade ago, the village lost its rural area status and so Jaunti’s access to the canal water stopped. 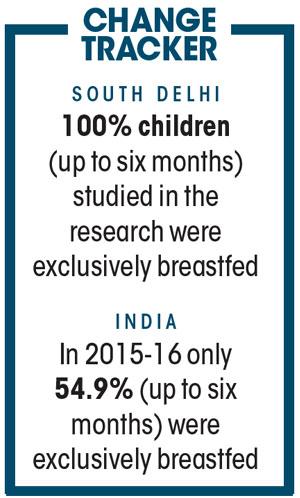 Earlier, groundwater was easily available, just about 9 metres down. It has now dipped to 30 metres and more.

“Use of chemical fertilisers is harming the environment. I have been proposing an ‘evergreen revolution’ for long. It will increase crop yield but not harm the environment,” he says.

Jaunti’s story gives a picture of the agrarian crisis the entire country currently faces. Experts say over the years, the agriculture sector has transitioned from a food crisis to a farm crisis.

Green Revolution is a long lost memory, and Jaunti and its farmers are the only ones left to remind us of a revolution that once led to an agrarian boom in the country.

“The future of agriculture lies in increasing production. At present, the country produces 1,909 kg grains per ha. In comparison, China produces 5,332 kg. The country needs an immediate campaign to bridge this gap,” says Swaminathan.

South Delhi shows how the country can grow healthy

Akanksha Gupta, mother of an eight-month-old, is ecstatic. Kalkaji, the posh South Delhi locality where she lives, was picked for a survey that helped the World Health Organization (WHO) to develop a growth chart for monitoring the health of children across the globe.

Paediatricians hand over this handy toolkit to every new mother to assess her infant’s growth. Governments rely on this growth chart to measure children’s general well-being, formulate health policies, and plan interventions and monitor their effectiveness.

Earlier, the world used the chart recommended by the United States National Centre for Health Statistics (NCHS). But doubts were raised on its credibility because NCHS had set standards based on the growth of formula milk-fed infants. Their growth differs substantially from breast milk-fed infants.Also, the NCHS growth chart was based on the survey conducted only on children in the US.

In 1990, the WHO reviewed the anthropometry reference — scientific study of the measurements and proportions of the human body. A decision was taken to launch a Multi-centre Growth Reference Study that would capture how children should grow in all parts of the world, rather than merely describing how they grew in a particular time and place. The study was conducted between 1997 and 2003 in six countries — the US, Norway, Brazil, Ghana, Oman and India. 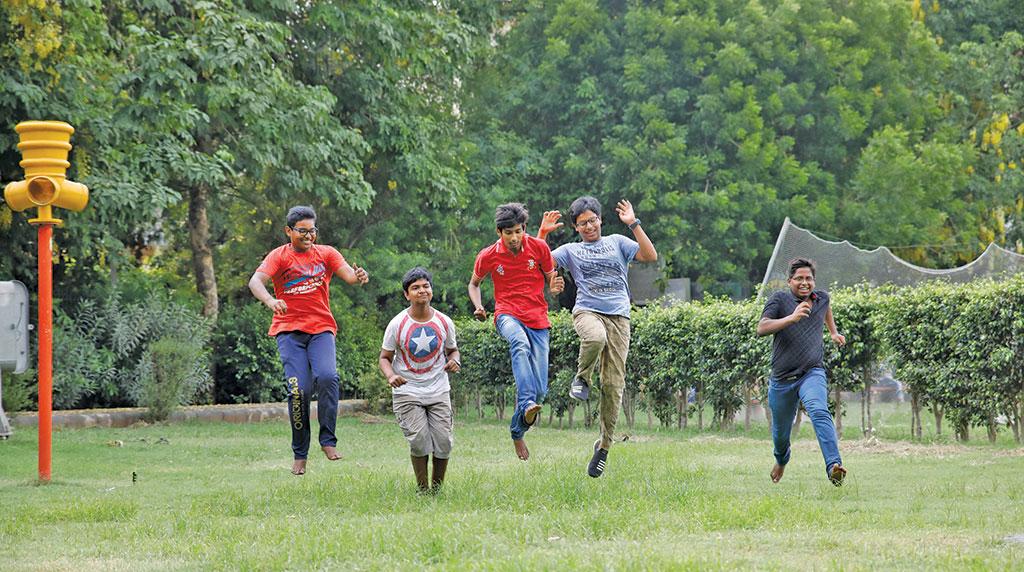 In India, researchers mostly from the All India Institute of Medical Sciences, chose around 8,500 children growing in best possible conditions. They chose 58 most affluent localities of South Delhi that have high land valuation such as Panchsheel Park, Vasant Kunj, Jangpura, Chittaranjan Park, Gulmohar Park and Hauz Khas. These children were raised in a healthy environment, fed nutritious diet and had minimum exposure to infections.

Their mothers were told to ensure that they followed good health practices such as breastfeeding and did not smoke during and after pregnancy. The researchers diligently followed pregnant women till delivery, and enrolled the children within 24 hours of birth.

After six long years of study, WHO finally brought out a new growth chart in 2006. Nita Bhandari, lead researcher of the Indian study, says, “It helped us to understand that if Indian children are given ideal situations to grow, they can develop quite as well as those in the developed countries.” WHO now recommends that mothers must exclusively breast-feed infants for at least six months.

India has the largest number of malnourished children, as per WHO data. One in every three children in the country is malnourished. “Since the WHO study was conducted in India, it gives the assurance that achieving the target is not a remote possibility. Moreover, since it was conducted in my locality, I know that the benchmark is not too far-fetched, and my child has all the chances of growing up healthy,” says Gupta.

(with inputs from Bhagirath)