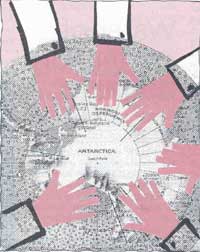 From May 7 to 19, delegates belonging to 26 nations, including India, assembled at Seoul for the 19th Antarctic Treaty Consultative Meeting (atcm). The confabulations, regarding steps to stop multinationals from ravaging the gigantic frozen continent boiled over, helped along by interventions from 16 other Treaty parties and representatives of the Antarctic and Southern Coalition (asoc).

The 1959 Antarctic Treaty was aimed to heal at least some of the damages that decades of human colonisation have inflicted upon Antarctica -- one of the last pristine natural glories that corporate profiteering has still allowed to exist, frayed at the edges but essentially intact. Among other indignities, 50 Antarctic stations that have been set up over the past 50 years produce tonnes of toxic waste and use dynamite.

In 1991, the Treaty's signatories negotiated the Protocol on Environmental Protection, better known as the Madrid Protocol, which prohibited mining operations in Antarctica for at least 50 years, designating Antarctica a "natural reserve, devoted to peace and science". But even three-and-a-half years after it came into existence, only 16 of the 26 members have come forward to ratify the Protocol.

India is 1 of the 16 Consultative members who are yet to put their stamp of approval on the Protocol. "But the reasons for the delay are mainly procedural," explains Atul Khare, senior bureaucrat at India's Union ministry of external affairs, who is handling Treaty-related issues. "The process of ratification has been slowed down due to the longdrawn internal procedures that need to be taken care of before a decision is made. There is no other substantive problem."

But he also stressed that India would take a stand only after carefully considering the stances of the rest of the non-ratifying members, especially the us, Russia and Japan, whose economic stakes over the continent are supreme. At Seoul, the Indian team was assertive, making a public announcement promising to ratify the Madrid Protocol by the next atcm, to be held in Holland in 1996.

The other issue which received considerable attention was that of setting up of a liability regime by negotiating a "Liability Annex to cover damage to the Antarctic Environment". In a bid to gauge the mood of the member nations, a week-long intergovernmental meeting took place in Seoul immediately before the atcm. But most partners, led by the us and the uk, hummed and hawed. They were clearly unwilling to bear the burden of the damages that years of indiscrimination had created.

All that materialised was a lopsided agreement with no binding power whatsoever. "We are deeply concerned about the pace of negotiations as well as about the content. Do we really have to wait for another accident before the political will is found?" asked the visibly perturbed asoc counsel, Jim Barnes. All the while, environmental groups stewed because they had been debarred from the intergovernmental meeting.

asoc also pushed hard for a new Committee on Environmental Protection, a key issue in the atcm agenda, particularly the setting of a date for the first meeting of a Transitional Working Group on Environment which would fill the gap till the details of the structuring of the Committee were settled. The ngos wanted to ensure that only individuals with an impeccable environmental background were appointed as members. India was particularly voluble on this score, rooting for a "strong and effective environment working group".

During the course of the discussions related to the Committee, an agreement was forged laying down stringent rules on tourism, a rapidly growing activity in Antartica, with attendant devastating environmental impact. The new agreement serves to put a check on uncaring pleasure peregrinations. There was also a general agreement on making greater use of Antarctica for carrying out global climate change research.

But the issue upon which a consensus bombed was that of identifying a location for establishing a secretariat for the Treaty System. While the uk stubbornly pushed for South Africa, a large group of members voted for Argentina. This contentious issue has been hanging fire for a decade. Now, sceptics are convinced that till the location of the base is decided upon, the world's last great wilderness will continue to be plundered.