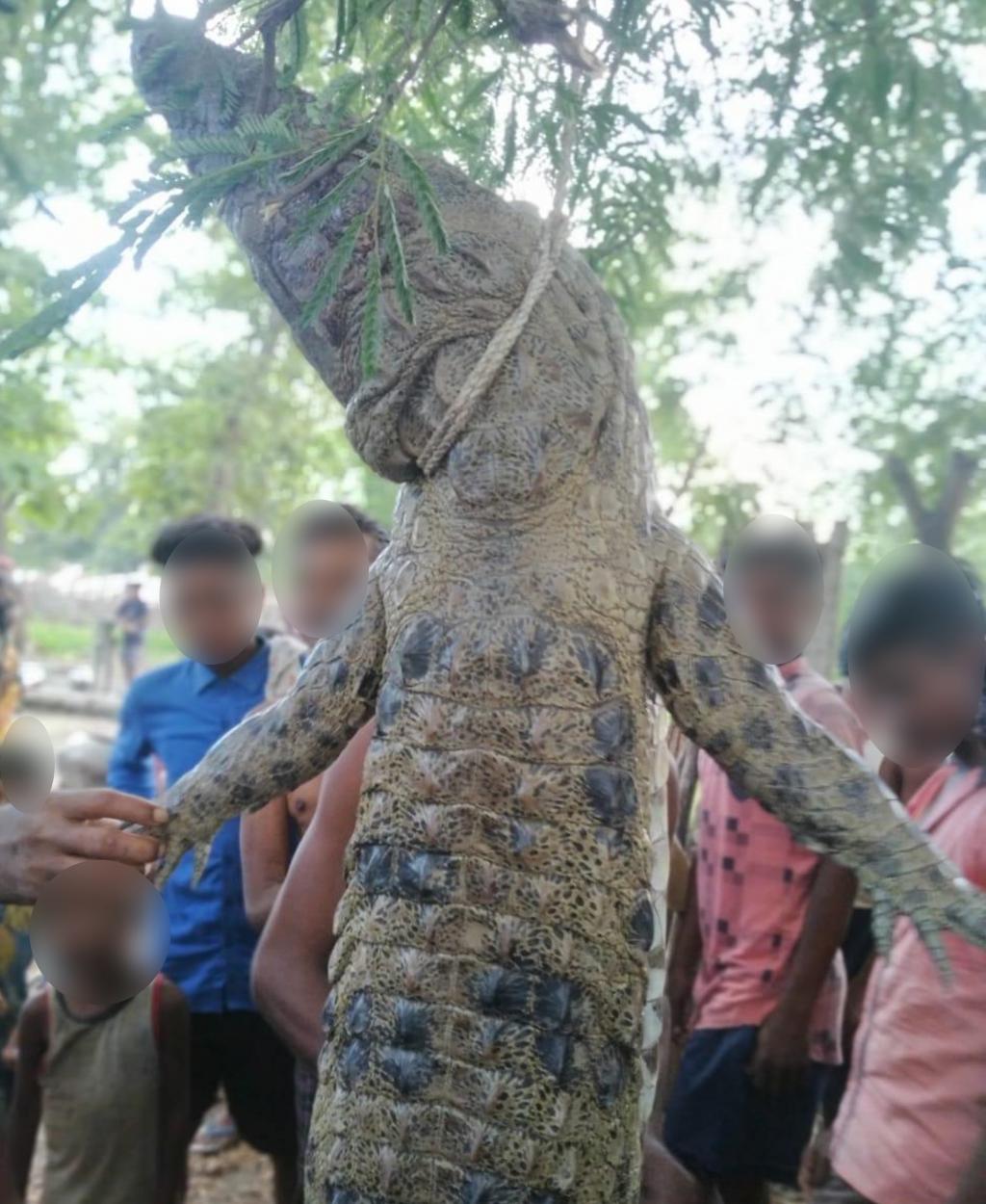 The crocodile was thrashed and killed by the villagers, who hung it on a tree in the village Photo: Ashis Senapati

A group of villagers in Odisha’s Malkangiri district reportedly caught a 10-foot-long mugger crocodile in a fishing net near the Saberi river in Kaldapalli village and consumed its meat July 2, 2020.

The crocodile was thrashed and killed by the villagers, who hung it on a tree in the village for a few hours. A few of them posed next to the crocodile carcass, took photos and videos and shared them on social media.

The state forest department officials, after receiving information of the incident, rushed to the village to investigate the matter.

“We came to know that the villagers brutally thrashed the crocodile and it succumbed to injuries,” said Pradeep Mirase, the Malkangiri divisional forest officer.

It is illegal to kill crocodiles, as they are protected under Schedule I of the Indian Wildlife (Protection) Act, 1972, said Mirase. “We have detained some villagers and are investigating the matter. The culprits will be arrested soon,” he added.

The crocodile was chopped into several pieces and its meat distributed in the village, according to one of the villagers. “When I finally saw it after its capture, I couldn’t believe my eyes. It was big enough to swallow a man all at once,” said an eyewitness.

Mugger or marsh crocodiles have never harmed villagers or domestic animals as this species of crocodiles are less ferocious than others, according to Sudhakar Kar, a herpetologist and former wildlife researcher for Odisha’s forest department.

The crocodiles are satisfied with fish in reservoirs and adjoining ponds, he said. The state’s fishermen are involved in pisciculture in the reservoir and the conservation of crocodiles, he added.

The state’s Ganjam, Koraput, Malkangiri and Mayurbhanj districts are habitats of mugger crocodiles. They are now in danger from the construction of dams, barrages, irrigation canals, siltation, changes in river course, artificial embankments and sand mining.

All these have combined to cause a limitation in the habitats of mugger crocodiles due to excessive, irreversible loss in their riverine habitat, said Kar.