Weapons of the weak

In the current election, campaign, mainstream parties were once again caught napping on their environmental commitments, spurring a novel people's protest 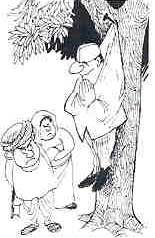 AS POLITICAL parties got busy cleaning and covering up their corrupt records, or exposing their rivals' misdeeds, grassroots issues were pushed to the back-burner once again during this election. Undeterred, a few still tried to push for a people's agenda.

An eyecatcher was the colourful rally by the tribals of western Orissa demanding marketing rights over minor forest products. These people's moves, sometimes, could bring about a few corrective steps like people's trial of candidates, introduced by the National Alliance of People's Movements (NAPm) in Maharashtra.

. But incidents of the disruption of' the BJP campaign meeting in Dehradun and later, manhandling Of BJP leaders by anti-poll Uttarakhand activists stand as a testimony.to how incensed people's mood could be. It even reached a frenzied climax with electoral offices getting choked with nomination papers from irrate farmers in Tamil Nadu and Andhra Pradesh.

In the Nalgonda and Mirvalugudu constituencies of Andhra Pradesh, 500- odd farmers of the Telengana Jalasadra Samakhiya, have filed nomination papers in a unique move, Their protest is against the non-implementation of the Srikakularn Left Bank Canal and the Sriramsagar-n irrigation projects, which featured as issues during the past elections. In Tamil Nadu, protesting the non-implementation of gin irrigation projeet, 1,049 candidates initially filed nomination for Modakurichy assembly.

The most spectacular statement, however, came from the tribal women of Rayagada, Orissa, when 5,000 of them rallied to the district headquarters On March 29, demanding a commitment from political parties for protecting their marketing rights over minor forest produces like broom grass and spices. Similar rallies organised in other parts of Orissa - Phulwadi, Gajapadi and Kalahandi - also attracted large turnout.

Orissa tribals are upset over the state-run Tribal Development Cooperative Corporation's (TDCC) collection of broom grass through corrupt middlemen at cheap rates. The TDCC was, originally set up to ensure fair prices to tribal broom makers. As it outlived its role, local mahila mandals, (womens' fora) began training the local women in broom making and then marketing the product.

Despite erstwhile chief minister Biju PatnaiVs assurances, the tribals' independent ventures were quashed by powerful traders in connivance with the forest department and the TDCC. Disgusted, tribal leader Gomti Jhudia of Kodakini village, Kashipur, says, "We will not allow candidates to enter our areas unless they give us written commitments." The villagers are geanng up to erect barricades following their counterparts' example in Koraput during last year's Assembly polls.

Says Ghanashyam, coordinator of Abhiyan, a local organising- group, "We lost belief in local parties like the Jharkhand Mukti Morcha, as they started supporting these projects once they entered the Jharkhand Council."

On the w iestern front too, all was not quiet. In Ratnagiri, where Enron remains a live issue, the Konkan Bachao Sangharsh Samiti - an NAPM ally - fielded its own candidate. Elsewhere in Maharashtra, the NAPM is organising a trident attack on established political parties by going 'for lok adalat, lok nivada and lok sankalp (people's court, opinion-poll and resolution).

The alliance will collect people's opinion and grill candidates on issues like habitat, water resources, and environment. A significant casualty could be the Shiv Sena, whi 'ch promised to rehabilitate 40 lakKUumbai-slum-dwellers but failed even to moot a relevant action plan.

In Madhya Pradesh, a conglomeration Of NGOs have prepared their own manifesto and orgapised a rally, in Bhopalon 'April 13. In south Gujarat's- Surat, tribal representatives from the eastern tribal belt met on March 31, implicitly demanding a separate tribal state. They are fielding tribal leaders Chhotubhai Vasawa and Ramanbhai Chowdhuri as candidates possibly with political support from the National Frorit-Left Front combination.

In Madras too, alums have become a burning issue for grassroots, groups. About 40 'per cent of the 46 lakh Madras' population live in over 2,300 slums. Recently, the Madras Slum People's Organisation led 350 slum- dewllers to releas~a manifesto, including demand for title deeds for the slums. It has also demanded a judicial enquiry before eviction and relocation of slums. "Or else we will boycott the polls," says an enraged -activist.

Poll boycott threat is becoming a reality in northern India. Such was the fury that in last summer, when Garhwal pin~ forests were burning, local villagers refused to douse the fire calling them "government's forests". When rest of the state went to the panchayat polls five months ago, Uttarakhand was exempted for fear of violence.

Of late, India has bee~ witnessing widespread disenchantment with the prevalent political system bordering subversion, but or:ganised militancy is not in yet. Noted social sctentist Ashish Nandy sees the reason rooted in main- stream political parties' failure to realise grassroots aspirations. He said, " All over the world political parties are like that. The interest is in sustainable cash, not sustainable development.