Global consumption of fossil fuels, the primary source of CO2 emissions, has gone up by 78 per cent in last three decades

“We do not know a planet like this,” wrote meteorologist Eric Holthaus on Twitter on May 13, 2019 while announcing that the atmospheric concentration of deadly carbon dioxide (CO2) had, for the first time, breached 415 parts per million (ppm). What he didn’t say was that the current levels are inevitable and that the concentration levels will scale further.

The world first breached the safe levels of 350 ppm in May 1986, according to US’ National Oceanic and Atmospheric Administration (NOAA). In May 1992, when the Earth Summit saw the formation of the United Nations Framework Convention on Climate Change (UNFCCC), the CO2 level was 359.99 ppm.  During the summit, 178 member nations set a target to bring CO2 emissions to 1990 levels by 2000. But the levels reached 371.82 ppm in April 2000. 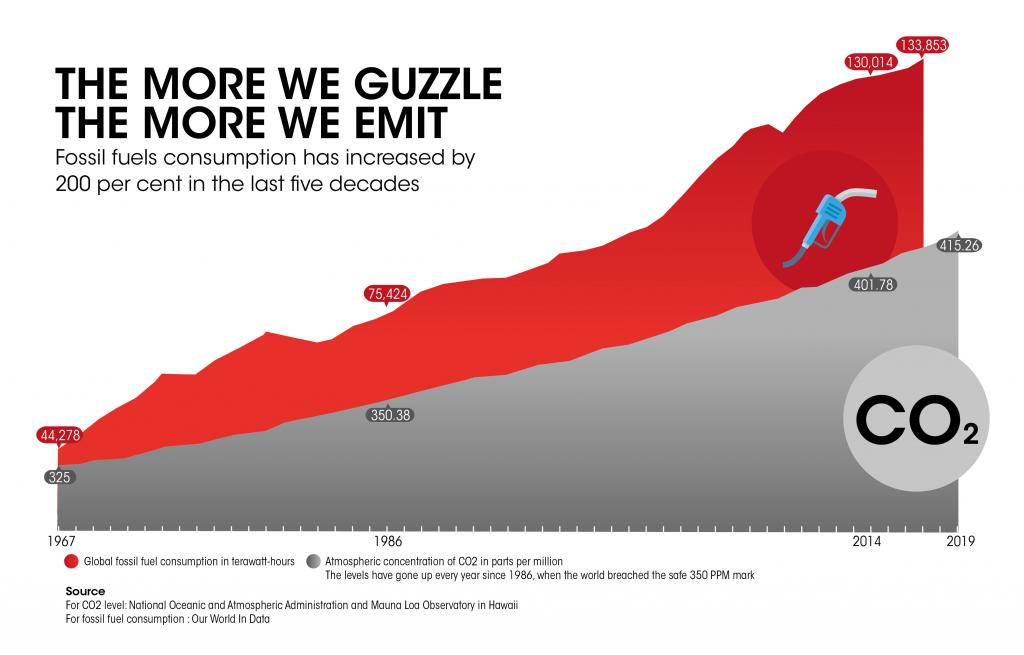 The CO2 concentration levels have increased every year since 1986 despite repeated commitments and UNFCCC meets where almost every member nation pledges to cut their emissions.

The recent reading on May 12, 2019 found the concentration levels to be at 415 PPM at Mauna Loa Observatory in Hawaii. This shows that the levels are “far higher than at any point in the last 800,000 years, since before the evolution of homo sapiens”.

High concentration of CO2 in the atmosphere — primarily caused by humans who continue to burn fossil fuels and chop forests that act as carbon sinks — disrupts the Earth’s natural cooling cycle, trapping heat near the surface and causing global warming.

In fact, the world is already 1oCelsius warmer than the pre-industrial levels and breaching 1.5oC limit will have devastating effects. The global consumption of fossil fuels has gone up by 78 per cent in three decades — between 1986 and 2017.

Even the recent Fani cyclone in Odisha, which is being compared to the 1999 Super Cyclone, became unpredictable because of climate change. The India Meteorological Department had to revise its prediction nine times. This was primarily due to changing wind systems that are influenced by warming oceans. Since 1970, sea surface temperatures worldwide have gone up by about an average of 0.1°C per decade.