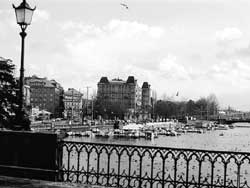 zurich was chosen as the world's most desirable city to live by a uk-based human resources consultancy survey. Following Zurich were Vancouver, Vienna, Geneva and Sydney. Thirty-nine key criteria were used to judge cities' desirability, including the political, economic, natural and socio-cultural environments, healthcare, education, housing, transport, shopping and recreation. New York was used as the baseline for comparison.

"Though the world's living standards have risen slightly since last year, the gap between cities at the top and the bottom of the table is still large," said Slagin Parakatil, senior researcher at the consultancy. The basic comforts of life, hygiene and personal safety are the main differentiators, and these are often lacking in developing countries. The gap is magnified by economic and political instability," he added. On the environmental front, Calgary, Canada, finished on top while pollution-choked Mexico City came last.