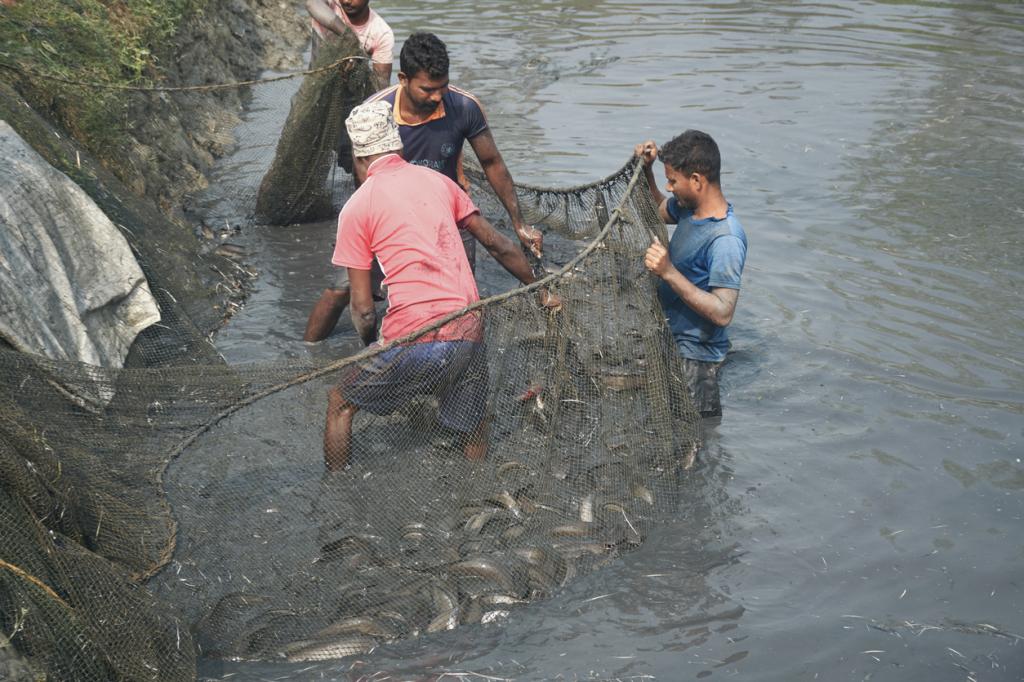 The Union Ministry of Fisheries, Animal Husbandry and Dairying wrote to the chief secretaries of all states and Union territories January 14, 2022 regarding the threat posed by antibiotic use in the aquaculture sector. There is an urgent need for countermeasures since the threat persists despite measures and guidelines, Jatindra Nath Swain, secretary to the fisheries department under the ministry, highlighted in the letter.

Antimicrobial resistance (AMR) has received significant attention from the ministry over concerns around the impact of antibiotic misuse and overuse in aquaculture and livestock sectors. AMR is the ability of bacteria and other microbes to resist the drugs used to inhibit or kill them.

Sale of antimicrobials in bulk quantities to aquaculture farmers, particularly shrimp aquaculture, is a serious concern, Swain pointed out. India is one of the world’s largest shrimp exporters, and in addition to health risks posed by antibiotic-laden food, there have been instances of rejection of shrimp consignments from India due to antibiotic detection.

If the trend continues and no decisive action is taken, exports may suffer significantly, the letter warned.  The Coastal Aquaculture Authority has already issued a list of antibiotics / pharmacologically active substances prohibited for use in shrimp aquaculture.

“I request that you may direct the concerned department to create awareness among the stakeholders of the aquaculture sector to completely stop use of antibiotics and take steps against the violators,” he wrote.

The letter also urged the chief secretaries to direct the state drug controllers to take action to monitor and regulate the sale and distribution of antibiotics for veterinary use, ensuring that antibiotics are only sold on the prescription of registered veterinary practitioners.

The sale of the 20 substances should be completely banned from use in shrimp aquaculture. The sale of antibiotics in bulk to feed manufacturers and aquaculture farmers also should be strictly regulated and monitored.

Mobile veterinary units can be a “game changer” for the livestock sector in rural and remote parts, Atul Chaturvedi, the secretary of the department of animal husbandry and dairying, wrote recently in The Hindu daily.

A majority of India’s 537 million cattle is in rural areas and so, access to veterinary services is limited. This gap in service delivery in these areas is mostly filled by quacks who charge less and are easily accessible.

Treatment by people with little or no formal training frequently results in the misuse of antibiotics, seen most commonly in the treatment of mastitis, affecting the productivity of animals.

Chaturvedi also raised concerns about high levels of milk loss faced by small farmers owing to mastitis, a bacterial disease in dairy cattle which also has far-reaching financial consequences for the farmers.

Quacks and the ease with which drugs can be obtained in rural areas exacerbate the problem, leading to drug misuse, poor disease management and antimicrobial resistance.

He also highlighted government efforts in introducing mobile veterinary units (MVUs) in its revised provisions of the Livestock Health and Disease Control Programme, with a major focus on the establishment and strengthening of veterinary services.

An MVU is a GPS-tracked four-wheeler van with working space for one veterinarian, one para veterinarian and a driver / attendant as well as space for diagnostic equipment, treatment, minor surgery and other basic requirements, as well as audiovisual aids to raise awareness.

This initiative will help address concerns around dairy farmers in rural areas being frequently compelled to travel far from their homes to seek treatment for their animals, by providing treatment at the farmers' doorsteps as well as in the event of an emergency.

On the other hand, these MVUs are expected to fill the gap of inadequate testing and treatment facilities as observed by the ministry’s Parliamentary Standing Committee and reduce the rise in zoonotic diseases.

The MVU model will also mitigate the issue of AMR, often caused because of high or low dosages, over-prescription and incorrect duration of medication. Increased adoption of such innovative approaches is also envisaged to create ample employment opportunities for veterinarians and generate high return on investments.

The Centre for  Science and Environment, a Delhi based non-profit, had highlighted the dangers of antibiotic misuse in dairy and aquaculture sector.  Its recent report Conserving the use of Critically Important Antimicrobials in Food-Producing Animals also showed the misuse of critically important antibiotics for human health in poultry, dairy and aquaculture sectors in India and called for the need to conserve their use.

Apart from ensuring responsible use of critically important antimicrobials in human health, this will also help animal health and food-animal production in the long term.