Manipur’s wild coriander acts as a flavouring agent in meat and vegetable dishes, besides being used as a medicine 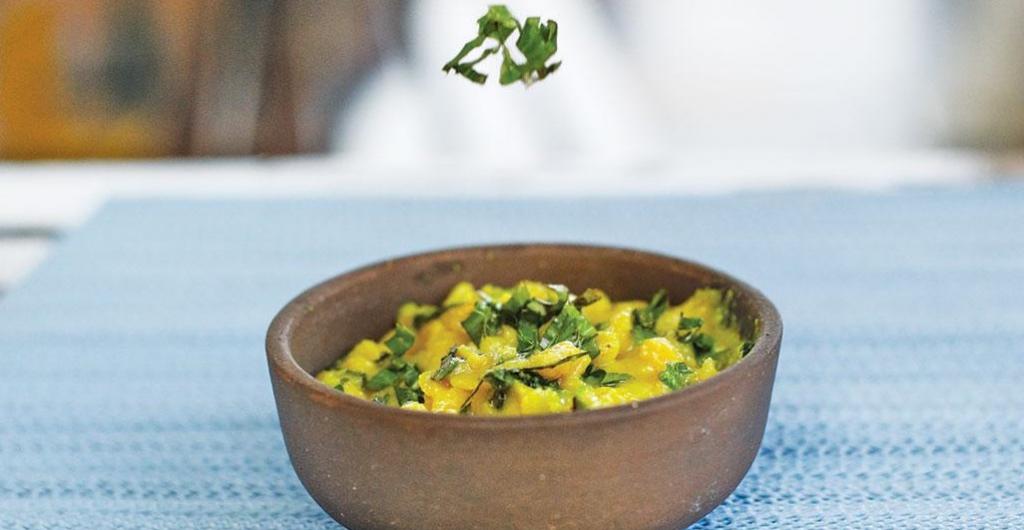 Awa phadigom is not consumed raw. It is finely chopped and fried in oil till its flavours are released. Photo: Vikas Choudhary

While trying to source yongchak — a Manipuri bean used in preparing eromba (an ethnic cuisine), and salads and pickles — from a friend in Delhi, I got a sweet surprise in the form of a packet comprising fresh leaves called wild coriander (dhania). On further enquiry, my friend, who works with northeastern agro communities, informed that the leaves are called awa phadigom in Manipur.

Scientifically known as Eryngium foetidum, the leaves are used as a popular flavouring agent in the state. In Manipur, awa phadigom is also referred to as sha maroi. In neighbouring Mizoram, it is called bahkhawr. It is commonly found in the northeast and is known by many other names.

To know more, I approached Jeena Sorokhaibam, who hails from Manipur. She is a passionate cook and runs a popular food joint, Lookacteast Kitchen, at Dilli Haat and Hudson Lane in Delhi. She explained that awa stands for Burma (present day Myanmar) in Manipuri language and phadigom means coriander. “So, awa phadigom essentially means coriander leaves from Burma,” she said.

No one has conducted any research on its exact origin. Awa phadigom is a wild aromatic plant which has small leaves spiked at the edges. It grows from June to August, and then again from November to January. The leaves stay fresh for a week if kept wrapped properly in the fridge.

AWA PHADIGOM IS not eaten fresh and raw. It does not have any taste of its own, but blends into the dish to make it more tasty. The leaves are finely chopped and then fried in oil. After that, it is used as a flavouring agent in various meat dishes, soups, salads and vegetables to enhance their taste. On being fried, awa phadigom emits a peculiar smell.

The trick is to continue frying till the leaves release subtle flavours in the wok. Commonly used in meat preparations, many swear that it reduces the typical smell associated with cooked meat and takes it to another level.

Despite its culinary uses, awa phadigom is an underrated herb that no one really bothers about. Though it is used in cooking as a fresh ingredient, its usage as a dried herb is practically nil and unexplored. Some online stores sell it, but it has not been marketed as a regular spice in India. A neglected and underutilised crop, its cultivation has not been tried.

Though used as a flavouring agent in Manipuri kitchens, awa phadigom has therapeutic uses too. In an article published in 2014 by the International Journal of Scientific and Research Publications, “Study of some important medicinal plants found in Imphal-East District, Manipur, India”, authors S Leishangthem and L Dinendra Sharma list a number of important medicinal plants found in the state and mention that awa phadigom is useful in the treatment of arthritis. The paper points out, “The use of medicinal plants and traditional medicinal knowledge system is still continuing...”

An important part of folklore medicine and local healing tradition in Manipur, awa phadigom is also used to treat constipation and epilepsy.

It is unfortunate that this plant, which is so easy to grow, was never considered mainstream till the 90s. It is available for sale in the market at present, but has not got its full due even now. Serious efforts to cultivate it on a large-scale can increase the income of growers as well as sellers.

This can go a long way in popularising its use at a time when the Food and Agriculture Organization of the United Nations is trying to conserve neglected species as hope for future food security.