Black rice is drought resistant and has rich medicinal properties. Manipur and Assam are reviving this variety 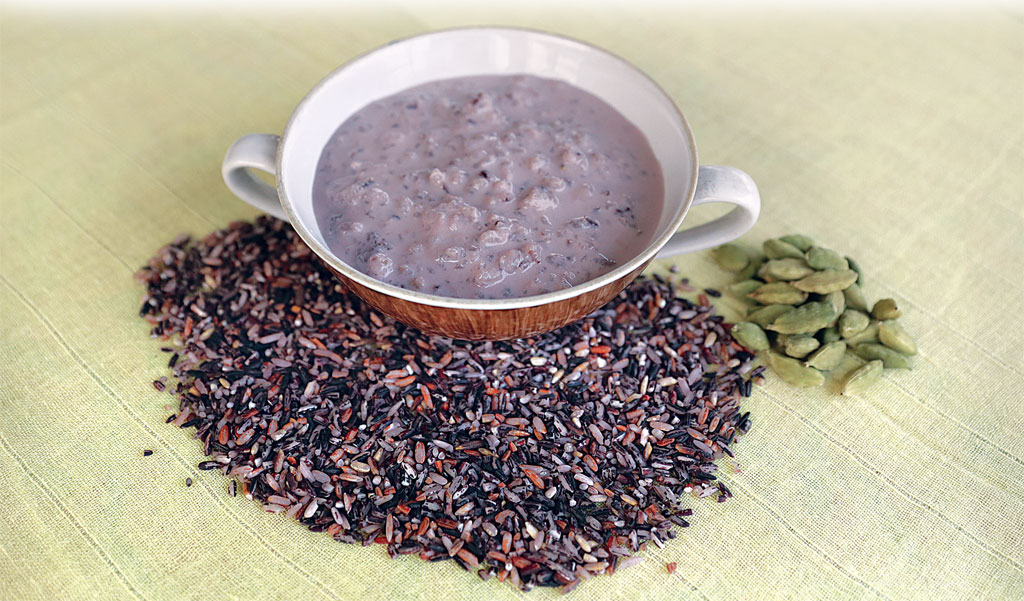 Grown in parts of Northeast and even in West Bengal, Jharkhand and Odisha, black rice is indigenous to these areas. In Manipur, it is considered food as well as part of the traditional medicine. Called chak-hao, it is eaten during community feasts. In the local language, chak means rice and ahaoba means delicious, therefore, chak-hao means delicious rice. Chak-hao kheer (pudding) is a part of any feast (see recipe: ‘Chak-hao’). The rice water too is used to wash hair to make it stronger.

The rice gets its dark black or purplish colour because it is rich in anthocyanins, which are powerful antioxidants, says Dinabandhu Sahoo, director of Institute for Bioresource and Sustainable Development (IBSD), Imphal.

“The rice contains more vitamin B, niacin, vitamin E, calcium, magnesium, iron, and zinc as compared to white rice. Rich in fibre, the grain has a sweet and slightly nutty taste. It is as an “unmilled rice”—the fiber-rich black husks of the rice are not removed,” he says. IBSD is conducting a research to trace the genome of the rice variety which grows in Manipur.

Research shows that anthocyanins not only act as antioxidants, they also activate detoxifying enzymes; prevent cancer cell proliferation; induce cancer cell death (apoptosis); have anti-inflammatory effects; have antiangiogenesis effects (they inhibit the formation of new blood vessels that encourage tumour growth); prevent cancer cell invasion; and, induce differentiation (the more differentiated the cancer cell, the less likely it is to grow and spread), says a research by China-based cancer specialist, Li-Ping Luo and team, which was published in the Asia Pacific Journal for Cancer Prevention in 2014.

The study shows that anthocyanins from black rice reduce the multiplication of breast cancer cells. Anthocyanins are known to protect from environmental stress factors, such as ultraviolet light, cold temperatures and drought.

Potshangbam Devakanta, a Manipur-based farmer who has been farming about 100 traditional varieties of paddy, says that black rice is drought-resistant. It is also a part of the traditional Manipuri diet and is locally called chakhaopoireiton. Devakanta was conferred the Protection of Plant Varieties and Farmers Rights Act award in 2012 for conserving black rice varieties. He is promoting its cultivation among other farmers too.

Through grown widely, the origin of black rice is not clear. Crop scientists in Japan, whose research was published in September in The Plant Cell, found that ancient humans grew certain varieties of rice for their nutritional and medicinal value through crossbreeding. Researchers dis-covered that the traits in black rice arose due to a rearrangement in a gene called Kala4, which activates the production of antho-cyanins. They concluded that this re-arrangement must have originally occurred in the tropical Japonica subspecies of rice and that the black rice trait was then transferred into other varieties (including those found today) by crossbreeding.

“The birth and spread of novel agro-nomical traits during crop domestication are complex events in plant evolution,” says the study’s lead scientist, Takeshi Izawa. The findings of black rice help explain the history of domestication of black rice by ancient humans, during which they selected desirable traits including grain colour.

Though figures for total black rice grown in Manipur is not available with the state government, IBSD officials say the rice is sold in the local markets for as much as Rs 300 per kg.

IBSD’s Sahoo says black rice only covers 10 per cent of the total cultivation in Manipur due to its poor yield. However, the state agriculture department is now vigorously pursuing the System of Rice Intensification, a methodology aimed to increase rice yield. Black rice farming is a low water, labour-intensive, organic method that uses younger seedlings singly spaced and typically hand weeded with special tools.

The department is urging Manipuri farmers to stop the jhum or slash and burn farming to claim agricultural land and adopt this technique to minimise the cost of production.

Assam’s agriculture department, on the other hand, is planning bulk cultivation of black paddy for exports. “We are planning to cultivate the organic variety of black paddy in Goalpara in bulk to export. The organic variety has a huge market abroad and has the potential to fetch a premium price,” says Manoranjan Das, sub-divisional agriculture officer of Dudhnoi in Goalpara district, Assam.

The department’s decision has been prompted by the recent success of black paddy farming under a Union government sponsored scheme at Amuguripara in Goalpara district. A total of 1,200 quintals of black rice was produced from 13.2 hec-tares under the scheme. With encoura-gement from the Union government and state agriculture departments, rare and traditional species of black rice could replay its glorious past.