The Bihar government is battling rumours against meat consumption through newspaper advertisements, after fake news linking meat consumption to contracting the novel coronavirus (SARS-CoV-2) and the ensuing disease (COVID-19), spread on social media across the state.

Consistent advertisements by the government’s animal and fisheries resources department said eating meat — after proper cooking — can not cause infection from the virus.

“Consumption of mutton, chicken, eggs and fishes does not spread the coronavirus disease,” said one such advertisement printed on local newspapers on April 17, 2020.

There were no reports of any cases of infection that spread by consuming meat, said the advertisement, tagged with the warning that non-consumption of chicken, fishes and eggs could, in fact, cause protein deficiency.

The government said people could eat any form of meat, after cooking it properly and warned against fake news on social media.

The government told people, however, to maintain hygiene and follow social-distancing protocols when going out to buy food.

Fake news spread on social media had an adverse effect on the business of poultry farmers in the state, Vinod Singh Gunjiyal, the director of Bihar’s animal husbandry department told Down To Earth on April 17. 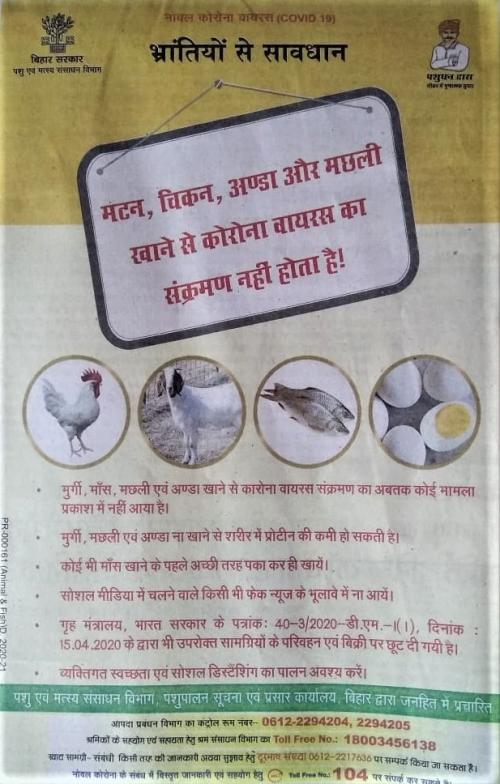 Another advertisement by the Bihar government Photo: CK Manoj

The loss in business was significant, considering the output of the poultry industry in the past three years, according to government data.

The total egg, meat, fish and milk production grew at rates of 65 per cent, 19.63 per cent, 18.47 per cent and 17.43 per cent, respectively, according to cumulative data released by the animal and fisheries resources department.

He said the people should continue eating non-vegetarian foods the way they have been eating other things.

“Scientific studies prove viruses die when food is cooked at 70 degrees. There is, thus, no cause of worry for food lovers,” Gunjiyal said.

A formal press conference to refute rumours was held by N Saravana Kumar, the secretary of the animal and fisheries resources department, on April 8.

The department also asked owners of poultry farms, mutton shops and fish shops to re-open their business establishments, adding there would not be any harassment by the police.

Many shop owners, however, refuse to open their shops for fear of assault or fines by the police, amid the nationwide lockdown to curb the spread of COVID-19.

“How we will transport chickens and goats when no permission was granted for running vehicles or thelas?” asked Asif, who runs a poultry shop in state capital Patna.

Shahrukh — the owner of a poultry shop in Patna’s Indira Nagar area — said he was forced to shut his store.

“No one will come to buy our products as police punishes those who are out on the roads during the lockdown,” he said.

A few poultry shop owners did open their stores, but said there were few takers for meat products because of the rumours that linked the virus to meat.

“I saw videos on social media that show poultry shop owners spitting on meat products, prompting me to stop eating chicken,” said Rajiv Kumar Singh, a Patna resident, adding that he developed an “allergy” for meat after he saw the videos.

Two individuals — from Siwan and Munger districts — reportedly infected as many as 37 people, including family members, neighbours and doctors.

The recovery rate in the state, however, was 46 per cent, much higher than the national average of 12 per cent.

Thirty-seven of the 83 patients were fully cured and had returned home to their families, said Bihar’s health minister Mangal Pandey.