COVID-19: How ‘Confarm’ is leading the way in Telangana

Indian farmers and urban consumers have a common concern amid the novel coronavirus disease (COVID-19) outbreak — of food security. While farmers need money and resources to harvest their crops, consumers need to ensure the harvested crop reaches them for consumption.

This is precisely what a partnership between farmers and urban consumers in Telangana, christened ‘ConFarm’ (Consumer-Farmer Compact), has been doing for the last two years. The consumers support farmers with their agriculural needs; in return, farmers ensure consumers are able to access food in a hassle-free manner.

The partnership is the brainchild of Deccan Development Society (DDS) and Disha Collective — two community-level organisations based in Sangareddy and Hyderabad districts respectively.

The initiative kicked off in June 2018 and has been endeavouring to bring farmers and consumers on the same platform for their benefit.

What does the initiative do?

The initiative requires consumers to support farmers in the beginning of a farming season. Each consumer supports a group of farmers with about Rs 12,500 per acre for their farming needs.

In return, at the time of harvest, consumers are given products according to the value they invested, leaving the middlemen out. They are are provided with millets, pulses, oil, jaggery and other necessary items produced organically — either in bulk or on monthly basis.

The initiative also aims to give millets a push in the urban market, enabling consumers to move beyond the commonly consumed grains such as rice and wheat.

Over the last two years, over 60 quintals of food grains have been delivered to urban consumers, according to the organisers. 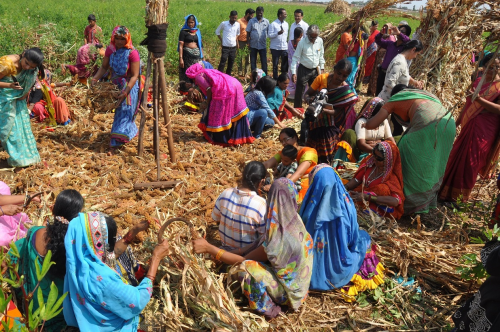 Under the intiative, farmers from state’s Pasthapur village sent their produce to more than 35 out of 120 partner consumers in Hyderabad on April 8 with permission from government authorities.

About four quintals of food grains including millets, flours, pulses, oilseeds, oil, jaggery, ready-to-cook and ready-to-eat products were delivered to consumers in Hyderabad. While some were home-delivered, others were distributed at common places convenient to consumers.

For the farmers, it meant that their hard labour did not gather dust in warehouses. For the consumers, the initiative was an assurance that their food security was intact.

According to DSN Raju, founder, Disha Collective, the organisation could successfully carry out delivery with a group of people — from women farmers in the village to young volunteers in the city.

The coordinators of the program said technology and cooperation of consumer helped easy transportation of food to consumers.

They added that following lockdown imposition, suggestions to suspend the initiative temporarily started pouring in. However, it was eventually decided that the partnership held greater value in these difficult times; the team decided to move ahead despite supply chain issues.

"Such supply chains are the need of the hour. Farmers and consumers must come together to face crisis moments in the future as well," said Raju.

“We are happy to know that our products reached people in the city during the lockdown. We will continue to support them in whatever way we can,” said Chakribai, a farmer in Sangareddy district.

Chakribai and her fellow farmers are part of a collective called ‘Sangham’, a women farmers collective, wherein they discuss food-farming and gender-related issues.

Besides partnering with urban consumers through Confarm, they also established Sangham market, a women farmers cooperative which helps them become self-reliant even when market and consumption needs fluctuate.

“We don’t face any difficulties in dealing with our harvest. Whatever we cultivate, we give it to our own market and keep some for our own consumption,” she said.

She added that the sharing economy in the village has helped alleviate hunger and ensured their nutritional needs are met.

The farmers who are part of the initiative practice traditional ecological farming with an emphasis on biodiverse cultivation. It helps them have dietary diversity in their food choices and control over their land and food production that are not dictated by the vagaries of the market.

The practice has brought them closer to a group of consumers who have been keen on trying an alternative route.

"When all of us are confined to our homes with restricted access to essentials, our farmer friends offer solace. They ensure access to good food even during the crisis,’’ said Sukanya Ramesh, a consumer who works at a private laboratory in Hyderabad.

Consumers like Sukanya are glad they could do their bit supporting farmers.

“I have been working with Confarm since its inception. It has given me a sense of security in terms of food that I eat and give to my family,” said Swati, who works as a research assistant at University of Hyderabad.

“Now I know where my food comes from and how it is grown,” she added.

In a similar initiative by the Government of Maharashtra, attempts are on to revive a two-decade-old initiative to reach fresh vegetable produces directly to consumers-bypassing Mandis. The same is touted as a solution to overcome crowding of mandis during lockdown while reducing the consumers’ exposure to local markets or supermarkets.

With the coordination of urban and rural government bodies, the program attempts to have the participation of farmers’ groups and farmer producer companies.

At this juncture in crisis — when free-market system and global trade are staring at an uncertain future — local solutions such as ‘Confarm’ hold greater prominence.