The medley of vegetables prepared on Govardhan Puja, is an example of how festival food in India always had inbuilt systems to protect and improve health 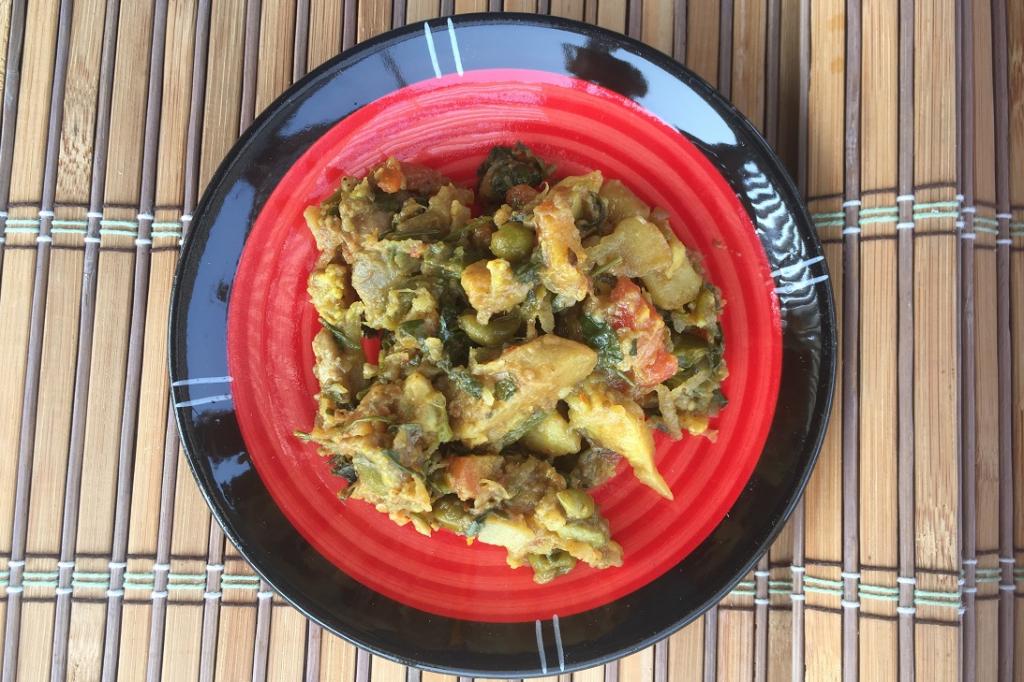 In India, festivals are often just an excuse to eat tasty and rich food. The festival of Diwali is no different and is now synonymous with sweets and fried food. Traditionally though, this was not the case. Preceding generations made an effort to ensure that wholesome meals were consumed even during celebrations.

Annakut ki sabji is a medley of vegetables prepared on Govardhan Puja, usually in north India and is an example of how good food is included in festivities. This puja comes a day after Lakshmi Pujan, when people have had their fill of rich food and crave simple food that is easy on the stomach.

The Annakut ki sabji fits the bill. It is a mix of all seasonal vegetables that are boiled with very little spices. Though there is no fixed list of ingredients, most families have their own recipe.

In my home, eggplant, methi (fenugreek) leaves and water chestnuts are essential while other vegetables can be added based on availability and personal choice. It is a perfect way of tasting and celebrating all the winter vegetables in one go.

According to Hindu mythology, Lord Krishna persuaded the people of Gokul village to worship the Govardhan parvat (mountain) instead of Lord Indra for the natural bounty from its forests. This angered Indra who unleashed torrential rains on the area.

Krishna picked up the mountain to provide shelter to the people and the animals. Govardhan Puja is a way of thanking Krishna, who is offered 56 dishes or chappan bhog on the day.

The various dishes are arranged in the form of a mountain and the festival is also called Annakut (mountain of food). Annakut ki sabji is distributed as prasad after the puja. In Uttar Pradesh, the festival is celebrated in every home.

Cow dung is used to make a representative village with greenery, livestock and people. The people who take care of the livestock in the village, the gwalas or cowherds, are thanked for their work and given annakut prasad with puris fried in mustard oil. The rest of the family too consumes this soothing vegetable mix.

But Annakut ki sabji is not the only healthy recipe consumed during the five-day Diwali celebrations. Each of these days have a special food linked to them, which is the most healthy, nutritive and environmentally appropriate recipe possible.

On the second day of Diwali or Naraka Chaturdashi, a mix of 14 green leafy vegetables is prepared in West Bengal. This chothyo saag is eaten with rice.

Similar vegetable preparations are consumed during other festivals too. In Maharashtra, Bhogi chi bhaji is made on the day before Makar Sankranti. In this recipe, vegetables like flat beans, carrots, eggplant and green chickpeas are used.

This is richer than Annakut ki sabji as ground sesame seeds and peanuts are used too. This is usually eaten with bajra bhakri (flatbread made from pearl millet). In Tamil Nadu, a similar mixed vegetable is prepared during the Pongal festival.

Pongal kuzhambu is prepared using the fresh produce after the monsoon. These include field beans, raw banana, sweet potato, yams and eggplant. This is consumed with rice.

These mixed vegetables are usually boiled and have the minimum amount of spices. This is one reason these can soothe the stomach after rich festival foods. But these vegetables are also a rich source of vitamins, minerals and phytochemicals and have been found to be useful in reducing the risk of disease like cancer, stroke and diabetes.

However, the biggest benefit of such vegetable rich recipes is the fact that the vegetables are rich in fibre.

The fibre hypothesis proposed by Irish surgeon Denis Burkitt in the 1970s suggests that people who consume high-fibre diets have fewer chronic disease. They are low calorie and low fat and useful in controlling weight.

Fibre has an important role in maintaining the normal function of the digestive system and improves proper bowel function. This is of paramount importance for remaining healthy after the festival season and being ready for the next food fest.

Take small pieces of the following vegetable to make a total of 1 kg.

Peel and cut the vegetables to small pieces. Put a wok (kadhai) on flame and heat the vegetable oil. Add the spices and condiments and the vegetables. Cook the vegetables till they are soft and can be mashed. Add water if needed. Add ginger and green chillies. When the sabji is ready, add garam masala and amchoor. Mix well and serve with puris.