Good or bad? When it comes to food, it’s not that simple

Our ideas about the relationship of food with health and medicine are increasingly shaped by modern science. 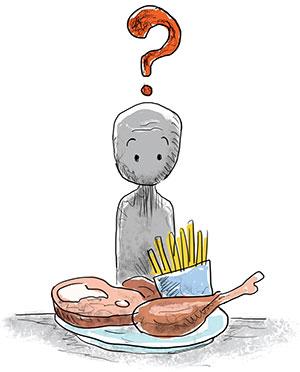 For decades, we have been fed on the received wisdom that fat and cholesterol are bad for health. These two devils, we were warned, not only increase the odds of getting obese, but also make us more vulnerable to infirmities of the heart.

So trusting the boffin’s word, we zealously put a red flag on red meat, abandoned the pleasures of egg-yolk, and reluctantly resigned ourselves to the unappealing low-fat, high-carb formula. Well, it turns out we have been had.

Following a comprehensive review of three decades of research on the diet-health connection, US scientists have practically absolved fat and cholesterol of their supposed sins. This February, experts advising the committee responsible for developing dietary guidelines admitted there was “no appreciable relationship” between dietary cholesterol and blood cholesterol.

A few months earlier, they had debunked the goodness of low-fat foods by removing the cap on daily intake of total fat. However, artificially produced trans-fats found in many processed foods remain an offender.

While the new guidelines may be meant for Americans, they are no less relevant for anyone entangled in the global scientific-industrial complex. With the gradual liberalisation of the Indian economy since 1991, millions of Indians have been consuming processed foods designed in the West.

Besides, as the West is still the hub of cutting-edge basic research in health and nutrition, our ideas about the complex relationship between food, health and medicine are increasingly shaped by modern science.

So what went awry? Why did it take scientists six decades to detect an error as grave as this? The tortuous history of the process that nailed the smoking-cancer link might suggest probable complicity between venal scientists, industrialists and politicians.

However, while food companies do lobby, the devil here seems to be the nature of evidence used to link diet and health.

The science of nutrition is founded on epidemiology, a kind of study in which researchers investigate how two things might be connected, say smoking and cancer, by tracking large groups of people over a long period. The trouble is that epidemiology, no matter how rigorously designed, can only tell you whether two things are linked and how strongly. Scientists call it correlation. What it can’t demonstrate is whether one thing causes the other. This is the fundamental problem that plagues controversies on the impact of any external agent on the human body.

Until a decade ago, epidemiology was the dominant method of eliciting evidence in nutrition science. The resulting guidelines were, therefore, based on mere associations that researchers, depending on factors, such as flawed statistical models, professional rivalry, and conflict of interest, could interpret as strong or weak. But since people seek certainties and not probabilities in order to take a decision, the guidelines were rendered into virtual certainties.

Many believe that the new guidelines are a healthy departure from the past. They are based on a review of randomised controlled trials — the gold standard for demonstrating causality — that investigated the alleged links between fat and cholesterol with heart disease. For example, one study found that replacing fat with carbohydrates is not even an insurance against heart ailments, let alone death.

It is not easy to flesh out the nuances of the complex conversation between diet and health. Even so, it doesn’t somehow seem right to turn people into guinea pigs in order to verify science founded on weak evidence. As Aaron E Carroll, paediatrics professor at the Indiana University School of Medicine, wrote in the New York Times: “That is disappointing not only because it reduces people’s faith in science as a whole, but also because it may have cost some people better health, or potentially even their lives.”

Can one trust the new guidelines? May be more than the earlier ones. But given nutrition science’s flip-flop nature, one might be better off following old grandma’s thumb rule: eat everything, but in moderation.

This extract is from the book Science Tales: Writings on the Interplay of Science, History, Gender, Culture and Politics, published by Centre for Science and Environment (2020)