Hero Herb: Why we need to focus more on turmeric

The pandemic years have witnessed a boom in the production and export of the humble underground stem called turmeric, along with a renewal of interest among the scientific community in the spice’s therapeutic qualities, especially against COVID-19. 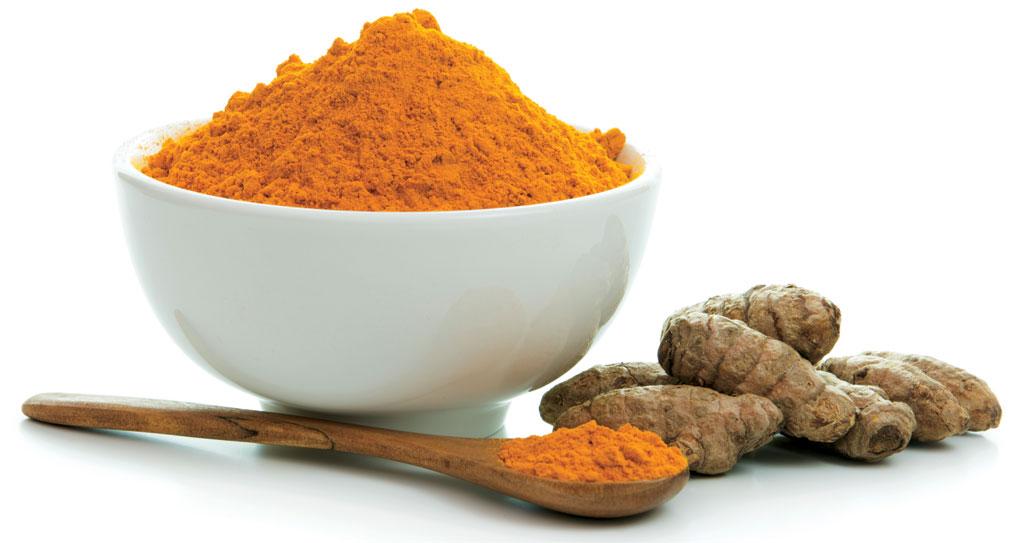 Trumeric, used in households across the Indian subcontinent is the only natural source of curcumin — the compound that lends the golden hue and the fabled healing qualities. Turmeric (Curcuma longa), native to India, has been studied extensively for its effects against viral diseases in recent decades, but the COVID-19 pandemic has renewed interest in the spice and in curcumin, both of which have been tested as a treatment for the viral disease, with encouraging results. Sample these:

“After the COVID outbreak, our sale of Lakadong turmeric has doubled. It has become our best-selling product,” says Kimbretta Khongwir, head of Zizira, an online portal that helps farmers of Meghalaya sell their produce. The state has applied for a Geographical Indication tag (this tag conveys an assurance of quality and distinctiveness essentially attributable to its origin in that defined geographical locality) for Lakadong turmeric, which has 7.5 per cent curcumin.

Also read Stormbreaker: How turmeric can be of value in situations like COVID-19 pandemic

Most of India’s other 200-odd varieties—tested in a germplasm study going on since 2016 at the Council of Scientific and Industrial Research (CSIR)-North East Institute of Science and Technology in Jorhat—have 1.65-7.35 per cent of it.

Some of the popular cultivars of this kharif crop that grows in hot and moist climates are Duggirala, Tekkurpet, Sugandham, Amalapuram, Erode local, Salem, Alleppey, Moovattupuzha and Lakadong. The top five turmeric producing states of India in 2020-21 are Telangana, Maharashtra, Karnataka, Tamil Nadu and Andhra Pradesh, as per indiaspices.com, a website maintained by the Spices Board of India (see ‘Turmeric territory’). 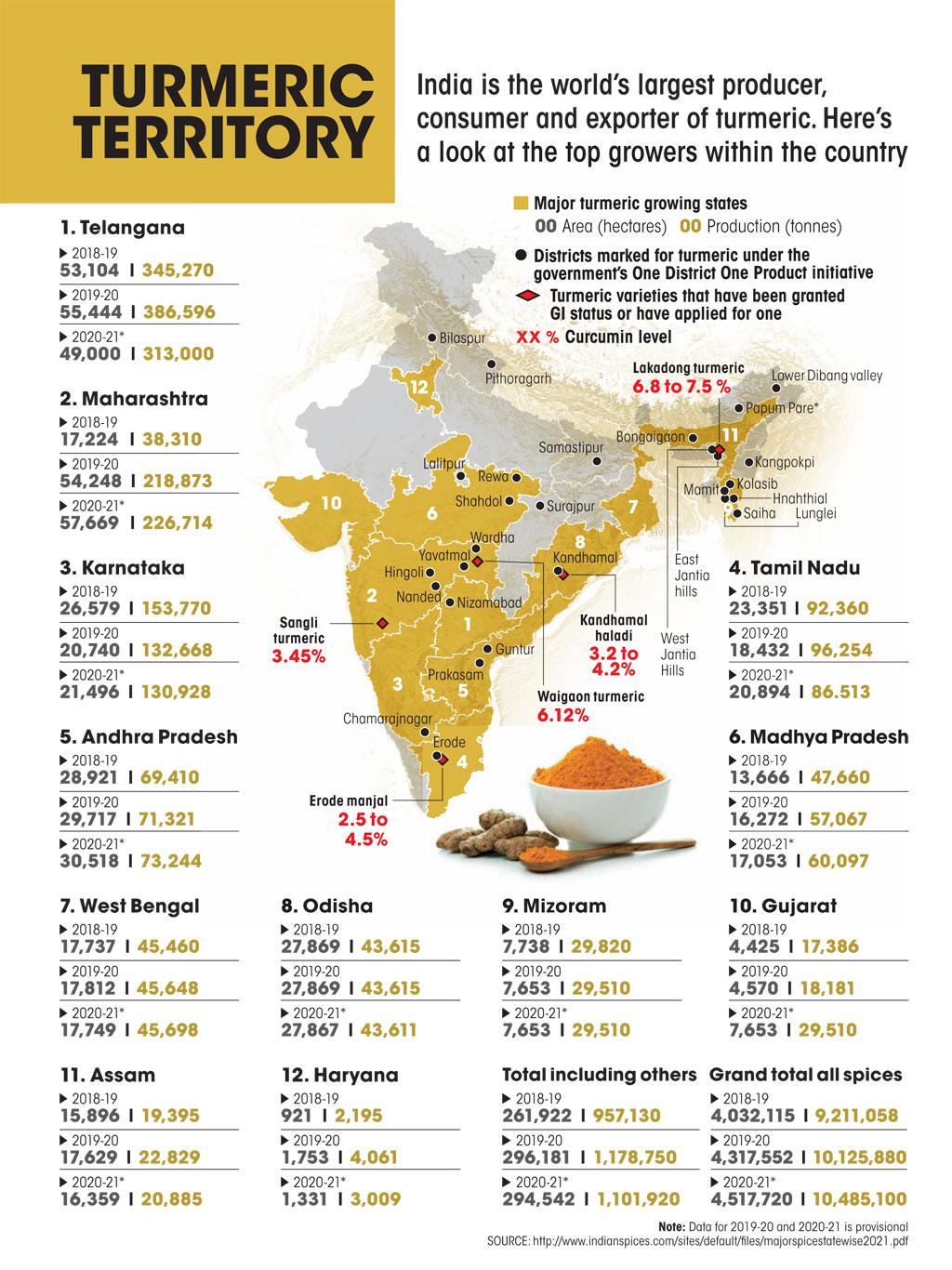 People became more aware of turmeric’s health properties during the pandemic since everyone was looking to boost their immunity, Khongwir says.

Dinabandhu Sahoo, Director of Centre for Himalayan Studies and Cluster Innovation, University of Delhi, who has spent years in the North East, got a former student of his to send him 3 kg of Lakadong turmeric. He takes one spoon of this turmeric (households turmeric is a powdered form of the plant’s dried rhizome—the underground stem growth) with a quarter spoon of pepper in hot milk each day and swears by their health benefits.

“Even with extensive travelling, I have been protected,” he says. He prefers Lakadong turmeric since it dissolves completely in milk, unlike the commercial varieties in the market and gives the milk a very different texture.

Post pandemic, turmeric is one of the fastest-growing dietary supplements. As per ‘Global Turmeric Industry’, a market report by reportlinker.com, a France-based technology website, the global curcumin market, valued at $58.4 million in 2019, is expected to witness a growth of 12.7 per cent by 2027. As the world’s largest producer, consumer and exporter of turmeric, India stands to gain from this. It already has.

India produces 78 per cent of the world’s turmeric, as per a reply given by the Union Minister of Agriculture & Farmers Welfare Narendra Singh Tomar in the Rajya Sabha on March 12, 2021. The country’s turmeric production saw a near consistent growth since Independence till 2010-11 after which it started fluctuating.

The year 2020-21, was even better, when the export of turmeric grew by a huge 42 per cent in terms of volume during the first six months itself, as per a press release by the Union Ministry of Commerce and Industry on January 29, 2021. Why then did the farmers take to the streets in Nizamabad — the benchmark market in India’s largest turmeric producing state of Telangana — in January this year?

Though the production and export of turmeric has risen, farmers have not benefitted. Nagarjuna Kumar SM, who has a turmeric farm in Karnataka, says the input cost per acre (one acre equals 0.4 ha) is on an average Rs 1,50,000. One acre produces 20 tonnes of turmeric which converts to 4 tonnes of dry turmeric if the harvest is very good. Usually the yield is about 2-3 tonnes per acre and the average sale price is Rs 80,000 / tonne.

“This year, farmers have got an additional Rs 10,000-15,000 per tonne, but they are still unhappy because of travel restrictions and GST,” says R Ramu, proprietor of Sri Mahaveer Traders in Nizamabad. Farmers also complain about insufficient irrigation facilities, absence of a processing plant in Telangana (the rhizome has to be boiled, dried and polished before being sent to the market, and farmers have to carry out the post-harvest treatment in an unscientific manner due to which the quality suffers) and lack of support in marketing or export. 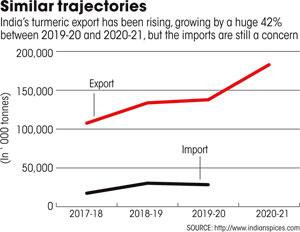 Telangana farmers have been demanding that a turmeric board be set up in Nizamabad for the last two decades to resolve these problems. But this has not happened. Their hopes were dashed again in March this year, when in response to a question in Rajya Sabha, Narendra Tomar said the government had no such plan.

Instead, the farmers were advised to use the Regional-Office-cum-Extension Centre of the Spice Board set up in the state in 2020. This office only provides export licences, and is not capable of dealing with the problems faced by farmers. The Spice Board has more than 50 spices in its jurisdiction and does not accord turmeric the same help it does to other spices, though the export earnings from turmeric are equivalent.

Getting a separate board would ensure that the farmers have access to better planting material and technologies along with support for marketing. There is enough precedent: There are five statutory Commodity Boards under the Department of Commerce to promote tea, coffee, rubber, spices and tobacco. There are also boards such as Coir Board and Central Silk Board under other ministries.

“We have suitable environmental conditions for its cultivation,” says Dilip Paranjape, assistant director at the directorate of agriculture in Goa. The farmers tested the crop last year by growing it within organic cashew plantations. “The state plans to begin with planting the crop on 15 ha. Local consumption would take care of the production,” he says.

Goa also has a lot of tourists who would be interested in organic turmeric, says Paranjape. The state has invited farmers to use the processing plant at ICAR-Central Coastal Agricultural Research Institute. The farmers have also been provided training in organic and inorganic cultivation, crop management practices and processing technologies. The institute has also put in place an Agri-Business Incubation Scheme to support farmers for a fee.

Other countries are trying to be self-sufficient. Sri Lanka announced a ban on import of turmeric on December 21, 2019, just days before the COVID-19 pandemic hit the world. The country needs 7,000 tonnes a year but produces only 2,000 tonnes. The demand is being met through smuggled turmeric, say media reports.

Turmeric is a positive crop; it improves health and is not water guzzling, says Narasimha Reddy Donthi, a public policy expert based in Hyderabad. It can be cultivated as a mixed crop which is good for both the farmer and the soil and the government should encourage it, Donthi adds. He, however, rues that the government has not found it crucial enough to prepare grading standards. This makes it difficult for the farmer to get a good price on National Agriculture Market (eNAM), a pan-India electronic trading portal.

The government’s disinterest in setting the board is affecting the interest of consumers too. “The real turmeric is going to the pharmaceutical industry and international markets. Indian households are not able to get pure haldi, while the poor cannot afford it. They are missing out on the health benefits,” says Donthi.

In January 2021, there were reports from Odisha, where raids found that adulterators were using waste rice powder and non-edible synthetic yellow colour in turmeric powder. In November 2020, there were raids in Maharashtra’s Malgodown during which 2,860 kg of turmeric powder, prepared by mixing worm and insect-infected rice along with chemicals and colour, was seized. 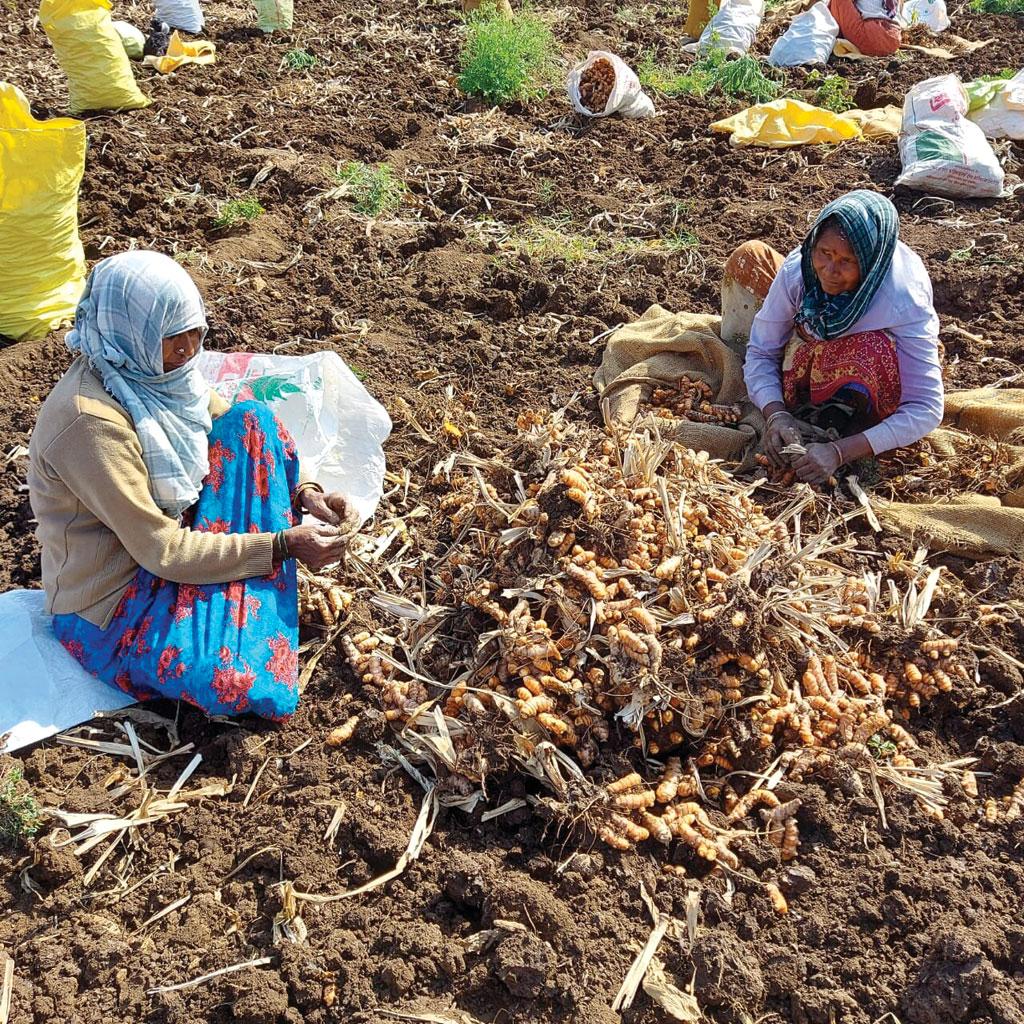 Despite being the biggest producer of turmeric, there is an increasing trend of import. According to the Spices Board of India, the import of turmeric has increased from 15,330 tonnes in 2015-16 to 28,580 tonnes in 2019-20. Most of the import is from Vietnam. The extraction and food processing industries in India prefer to get turmeric from outside since it is cheaper.

While on the one hand, this leaves India’s premium product free to be exported at a higher price, the domestic market is unable to absorb any extra production in the country. This surge in imports may hurt the interests of turmeric growers, says Parashram Patil, agriculture economist and consultant at Asian Development Bank, Delhi. Distress is just round the corner for the turmeric industry and timely intervention to restrict the import is needed, he says.

“India has surplus turmeric and farmers do not care whether it is used as food, dye or in pharmaceuticals as long as they get the price. This is where having the Turmeric Board will help,” says Patil.