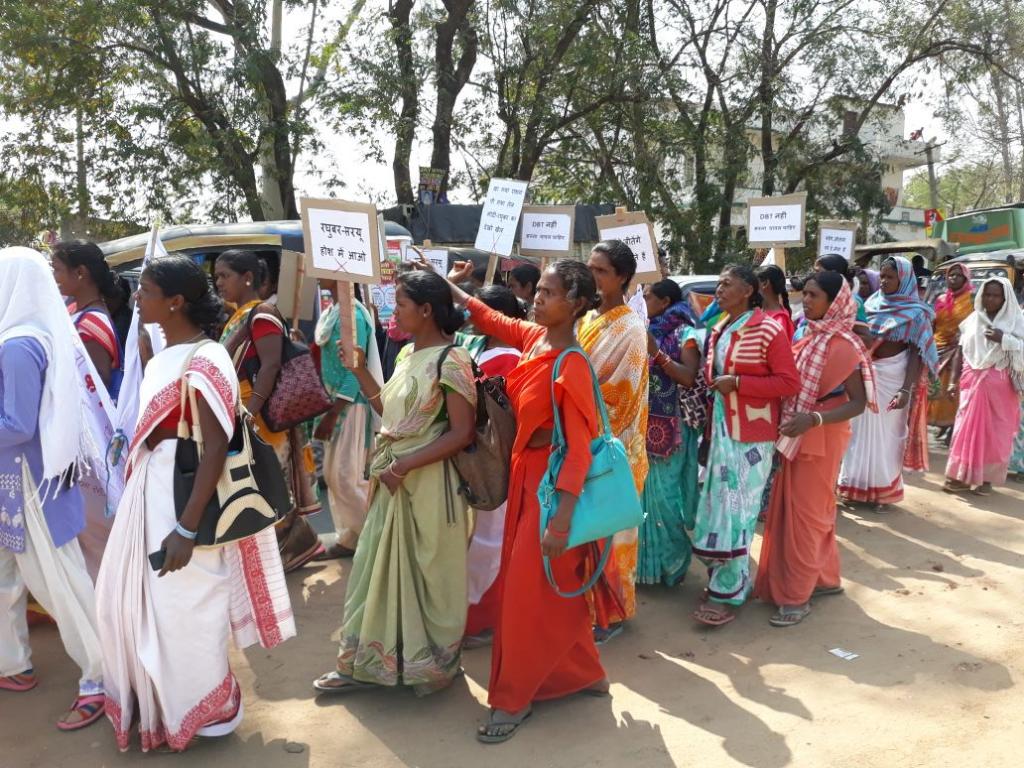 Hundreds have protested against the Direct Benefit Transfer (DBT) scheme started by the government of Jharkhand by marching from the Katahal Mor area of Ranchi towards the Chief Minister’s house via Piska Mor.

The protest was organised jointly by civil society organisations and the major opposition parties of the state which have come together under the umbrella banner of Ration Bachao i.e. save public distribution system (PDS). The civil society organizations include Right to Food Campaign, All India People’s Forum, United Mili Forum, Jharkhand Nagrik Prayas, among others. Political parties include Jharkhand Mukti Morcha, Congress, Jharkhand Vikas Morcha, Communist Party of India (Marxist) and Communist Party of India (Marxist-Lenin).

In January 2018, a survey organised by civil society organisations and coordinated by prominent economist Jean Dreze was conducted in 13 randomly-selected villages of Nagri Block to assess public reaction to the scheme. The findings were startling.

The survey revealed that the DBT system was causing tremendous inconvenience and that 97 per cent of PDS cardholders surveyed were opposed to it. According to the survey, nearly half of intended beneficiaries have been deprived of their food rations in the last four months. This is because have to spend on an average around 12 hours to collect the subsidy amount and then buy food from the concerned public distribution shop.

The sample households have an average 3.4 bank accounts in their families. But very few among them know which bank accounts receive cash subsidy. Respondents have also claimed that out of four installments, they had on an average received money worth only two. Respondents have bought rations only 2.5 times from ration shops in the last four months.

Banks are located on an average 5 km away from the respondents’ homes. At least 70 per cent of respondents have no way to find out whether their DBT money has come other than by going to the bank.

A whopping 97 per cent of respondents want the DBT system to be withdrawn in favour of the old system.

Moreover, the office of the Deputy Commissioner-cum-Sub Magistrate had also threatened not to give subsidy in case the amount was not being used for buying grains.

“The main actors of this protest are the victims themselves, who have been agitating off and on for 4 months – but their protests have fallen on deaf ears so far,” says Nazar Khalid, one of the coordinators of the recently-conducted survey.