The humble gourd is falling out of favour 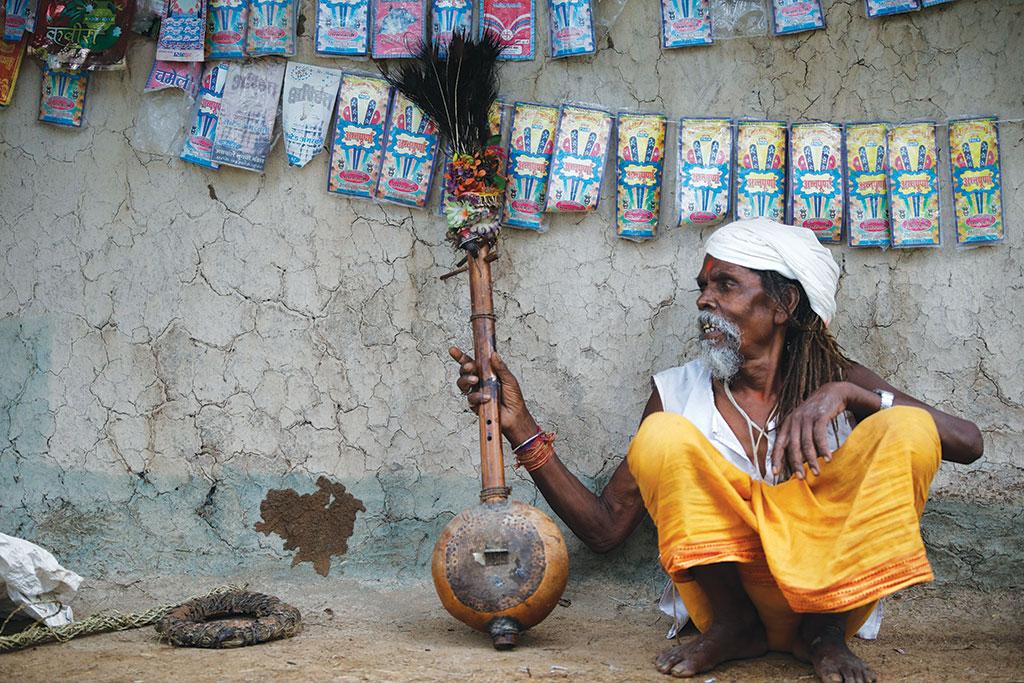 Motilal, a hermit who lives in the forests adjoining Baiga village Dhaba, flaunts his tambura, a musical instrument made from gourd. He says the soothing music of his tambura helps him unite with divinity (Photo: Vikas Choudhary)

A mellifluous tune breaks the silence as I trudge through a forested hill in the Baiga heartland of Dindori district in Madhya Pradesh. At places the music fuses with the gurgling sound of Burner, a tributary of the Narmada river, and becomes even more enchanting. Entranced, I start following the melody and reach a hut where a hermit sits enveloped in the stillness surrounding him, his fingers plucking at the strings of a lute. The shape of the instrument is unusual—swollen, organic and gourd-like. As the last notes recede, he turns towards me and greets with a warm smile.

Motilal has three wives. But some 14 years ago, he renounced all his attachments to the world and chose to live in the forest that has been home to the primitive Baiga tribe for millennia. “The soft, mellow sound of tambura helps me unite with divinity,” he says, as he offers me the three-stringed, long-necked instrument. Its base is made of the dried shell of a flat gourd and remains partly covered with the monitor lizard skin; a hollow shaft of bamboo with finger holes and strings attached to it pierces through the gourd shell. “Together, they create music that has a soothing effect on the brain,” Motilal asserts.

Could his passion for tambura be the reason for his renunciation? A folk song on gourd made famous by Bangladeshi playback singer Runa Laila flows: Sadher laau banailo morey boiragi (the humble gourd has made me a wanderer). The song refers to the wandering mystic minstrels or Baul singers of Bangladesh and eastern India who swear by ektara, a one-string musical instrument made of gourd with a round base.

While the deep, overtone-rich resonance created by the larger, perfectly-shaped gourds has inspired musicians and minstrels alike from time immemorial, the smaller varieties with awkward shapes have enriched the lives of rural people like the Baigas who still live in harmony with nature.

Hariram, a Baiga from Silpidi village in Dindori, has carefully stored dried shells of bottle gourd in a corner of his house. Most of these have small holes on top. He and his family use the gourd shells to carry drinking water while travelling or tending to crops. “In summers, we prefer storing water in the gourd shells as it remains cool for long,” says Sukhiaro from nearby Pauri village. Her pride possession is a giant round gourd shell, which she uses to store pej, a millet-based soup.

When asked how the pulpy vegetable gets converted into a hardy utensil, she explains like an expert: First, select a mature gourd and let it dry in the sun. Once the shell hardens, scoop out the flesh and seeds by drilling a small hole. Fill it with water and let it dry for three to four days. Remove any trace of the vegetable using a long stick, and the shell is ready for use. While bowls and spoons carved out of gourd shells are a common sight across villages in the Baiga heartland, the most important use of gourd shell, particularly the elongated ones, is to store seeds.

Elsewhere, these myriad uses of gourd shells have inspired a group of artists and entrepreneurs. In Chhattisgarh, Kunti Vatti of Golawand village in Kondagaon district is busy selecting a gourd shell to design a lamp. “I have been doing this for the past five years and find the art immensely satisfying,” Vatti says. But tooma art, or designing the gourd, is not easy and requires hours of patience. Vatti first peels off the outer skin and carefully blackens the shell by burning it.

To ensure that the inside of the shell does not get burnt, she fills it with water while exposing it to fire. On the polished surface, she creates intricate designs by drilling holes on the shell with heated cycle spokes and other tools. When a bulb is placed in it and the gourd is lighted, the intricate patterns throw magical contrasts between light and shadow and create patterns on the floor and walls. Just opposite Chitrakote waterfall in Bastar district, Vatti’s teacher Jagat Ram Dewangan has set up a small shop. “I have mastered the art after practising it for 12 years,” says Dewangan. But not many appreciate the art these days. One reason could be the tedious nature of the art; creating a lamp takes almost a day. But procuring gourd shells too has become difficult, he says. “Besides, of the 25 indigenous gourd varieties traditionally used in tooma art, people now grow only a few. I have to visit interior villages to collect gourd shells,” he adds. 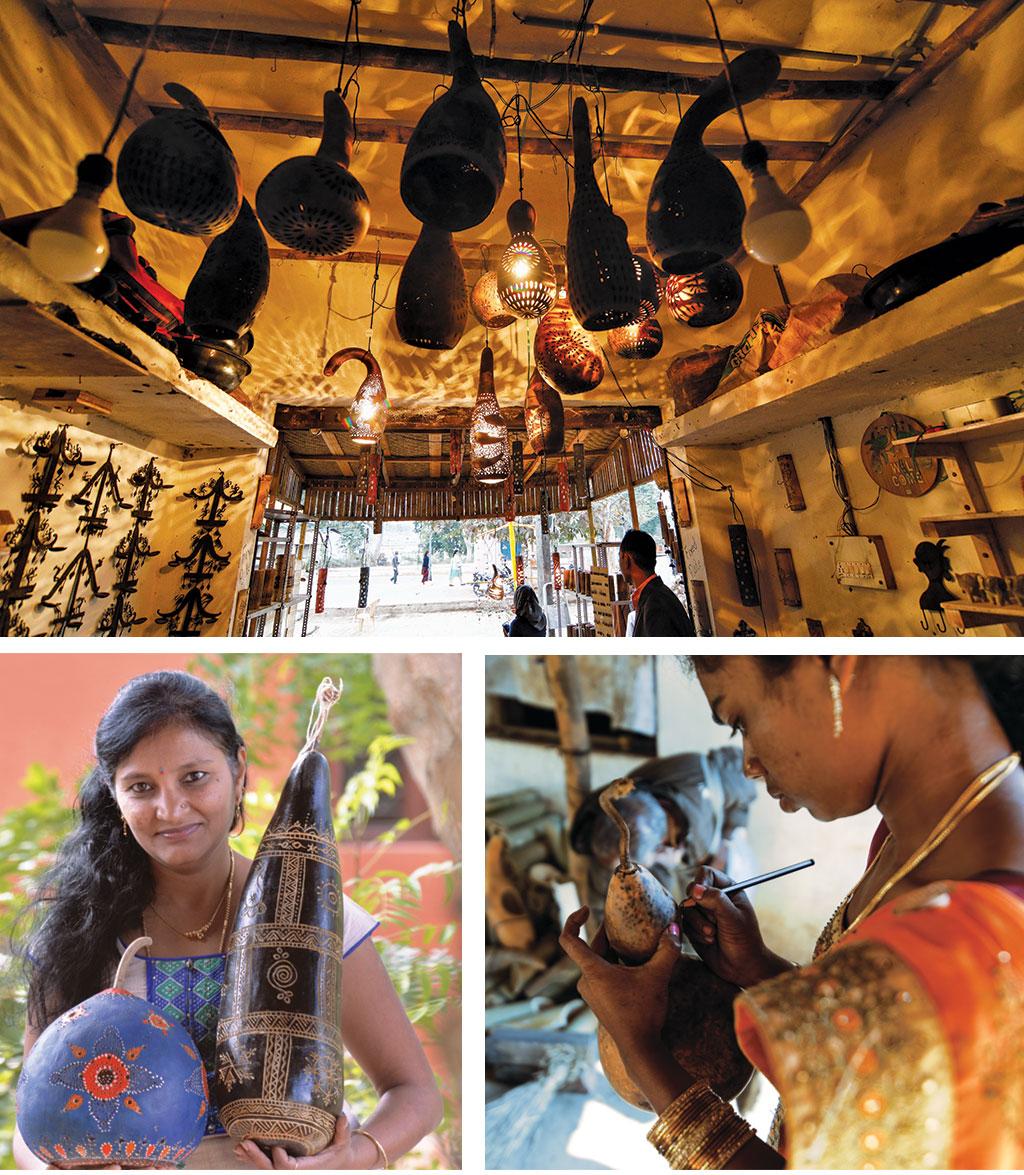 Away from Chhattisgarh, G Krishna Prasad and his wife Seema in Mysuru, Karnataka, have embarked on a fascinating enterprise, Krishi Kala, to conserve and promote indigenous varieties of gourd. As part of their field visits over two years in India and Africa, they have documented over 50 rare varieties. Seema is now giving a new lease of life to these vegetables by creating lamp shades, home décor items and pen stands from gourd shells. “The idea is to conserve gourd for the future generation. The huge and long gourds had a good diversity in the country. But the diversity has declined over the past 10 years. Farmers are not interested in growing these gourds due to the lack of suitable markets,” says Seema. To protect the art form and the vegetable, Krishi Kala has collected 5,000 gourd shells in its processing unit in Mysuru, and is training women in gourd painting.

Devullu Pachari, a social worker associated with Sanjeevani, a non-profit in Vishakhapatnam, says gourd shells were being used for storing till about 15 years ago. They have fallen out of favour due to plastic influx and would soon be pushed into oblivion. But Motilal does not think so: “After all, nothing can create the magic of gourd shell.”