Three crops rule the world: What it means for the planet’s wildlife

Over-dependence on wheat, maize and rice threatens the future of wildlife survival and global food security 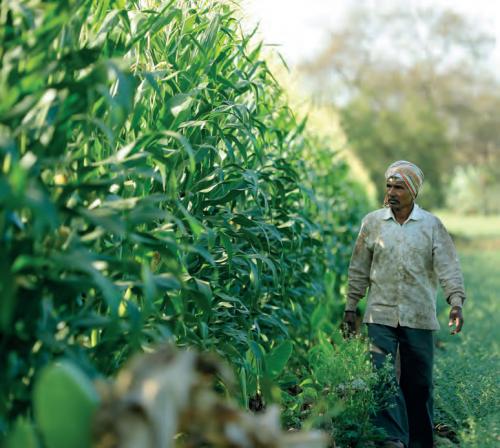 Around three-fourths of the food humans consume globally comes from just 12 plant and five animal sources, with just three crops — wheat, rice and corn — accounting for 51 per cent of the calories included in the diet, according to the United Nations Food and Agriculture Organization (FAO).

An analysis of these figures suggests that maize accounts for 42.5 per cent, wheat 27.7 per cent and rice 18.5 per cent of global cereal production — around 89 per cent of the total.

According to the United States Department of Agriculture (USDA), the European Union accounts for 18 per cent of the total global wheat production, China accounts for 17 per cent, India 14 per cent.

The US, China and Brazil account for 32 per cent, 22 per cent and 10 per cent, respectively, of the world’s total maize production, with the former being the largest exporter. Hence, we see billions of people rely on these crops to survive and to boost the economy. Any disruption in their production will have tragic consequences.

However, a 2019 report by the World Wild Fund for Nature (WWF) and food major Knorr, Future 50 Foods: 50 Foods for Healthier People and a Healthier Planet, reveals that agriculture dominated by wheat, rice and maize wreaks havoc on wildlife conservation. According to David Edwards, director of food strategy at WWF, wildlife populations have declined by 60 per cent since 1970 due to global agricultural trends.

The report says that both wildlife and human survival is tied to the way we eat. Repeated planting of the same crop on the same land area leads to depletion of soil nutrients. Successive crop generations then require excessive use of fertilisers and pesticides, which are detrimental to the environment and the consumers of the crops.

Insects, for instance, that live on farmland and feed on grass and other crops have seen a massive decline in populations over the last 50 years. This in turn has an effect on pollination. If insects continue to disappear, millions of plants will soon become extinct, putting agricultural production, and consequently food security, in jeopardy.

These three crops also threaten the world’s food security, by destroying the global agricultural biodiversity. Around 5,000 years ago, humans had thousands of plants to use as sources of food, including several varieties of the three important crops. However, the advent of the Green Revolution has reduced this pool to some three dozen plants.

For example, India was once home to 60,000 rice varieties, but the pursuit of high productivity promoted only a few cultivars with potential for maximum yield, at the cost of the plant’s genetic diversity. Several rice varieties have now become extinct, found only in gene banks.

This has adverse effects. First, dependence of just a few crops leaves the vulnerable to disaster in the face of famines, plant diseases, pest infestation, climate change or any other unforeseen event. As per a 2009 FAO report, How to Feed the World in 2050, the world will need to produce 70 per cent more food to satiate the hunger of the growing population over the next three decades, which these three crops alone will not be able to supply.

Second, the rising popularity of these three crops is homogenising human diet. Soon, there will be no region that is not dependent on either of these crops. Already, South Asia runs on rice. Daal-bhat (pulses and rice) is a staple meal in the Himalayan states of India and in Nepal. Wheat is a common kitchen ingredient all across the world. Meanwhile, China and the US alone consume 54 per cent of the maize produced globally, says USDA.

In order to ensure adequate food security for the future, we need to adapt our agricultural practices according to the principles of environmental protection and to the socio-cultural objectives of physical, intellectual, moral, emotional and psychological development.

Adam Drunowski, director of The Center for Public Health Nutrition at the University of Washington, says the discovery of nutrient-rich plants has prompted us to return to ancient cereals and heritage plant varieties. We can once again try to find some forgotten plants again and reintroduce them to the ecosystem. This will help wean us of our potentially dangerous food dependence.

Vir Singh is former professor of environmental science at GB Pant University of Agriculture and Technology in Pantnagar, Uttarakhand