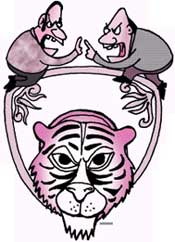 As the meeting began, I flipped open my notebook. I am very comfortable with battery waste, polluting factories, discarded keyboards and sewage. But here were a battery of experts deliberating on an issue -- tigers, conservation, people, wildlife -- I was a complete novice in. So I shut the notebook. Better to listen to the experts.

The meeting soon polarised into a tigers vs tribals debate. "We do not have enough forests left for experimentation," an expert brusquely said. "Let us leave the management of tiger reserves to experts like the forest department, scientists and worthy non-governmental organisations. We should not be concerned about petty issues like 'tribals'." This statement exemplifies the stance that one group of experts were vociferous about. The other group insisted, with equal passion, that tigers could be best protected, and their habitats managed, only if the local communities were involved: they have been living in forests for centuries and are traditionally attuned to looking after them.

As the words flew about and the table-top started getting thumped by closed fists, I couldn't help wondering if the debate was getting a little restrictive: our forest cover is rapidly declining, and the tiger population has also fallen sharply, but our experts still fight like cats and dogs. Task force chairperson Sunita Narain asked: "In the last 30 years of Project Tiger, we have neither been successful in 'protecting' our tiger population nor relocating these 'destructive' villages, so is it not time that we involve these tribal people into a dialogue and try and arrive at solutions?" This raised many eyebrows among conservationists and the forest department staff. But, a few interruptions apart, the latter preferred to keep its mouth shut, because it was playing the role of a generous host.

Ashish Kothari of Pune-based Kalpavriskha blasted the 'myths' that local people were destructive, and that forest management could only be done by a centralised bureaucracy. He said it was time to challenge such assumptions, for the negative impacts of the present conservation model far outweighed the positive ones. Replied a conservationist, "Can't we leave even four per cent of our forest area for tigers without any human interference?"

The climax of the commotion among the experts was a walkout by some conservationists. One of them justified the action thus: "This is a confused tiger task force. Rather it is a tribal task force, which has no concern for tigers."

The most interesting aspect of the meeting was that quite a few tribals travelled from Madhya Pradesh to voice their views to the task force. What almost all of them said was that, in the name of forest conservation and tiger protection, they had been alienated from 'their' forests. As one of the group put it: "When the forests were ours, we used to protect them, but now everything belongs to the government. So why should we bother to conserve anything?" Their alienation was palpable.

Bhurelal Mandi of Tawa Matsya Sabha (tms) pointed out how his tribal co-operative had removed the contractor system of fishing in the reservoir of the Tawa dam (in Madhya Pradesh) and how the returns per kilogramme of fish had increased from Rs 3 to Rs 17. But on May 24 this year, the tms got a letter informing them their area fell under Project Tiger jurisidction; they would soon have to stop all fishing and agriculture-related activities. The situation had, he pointed out, already taken a violent turn.

Relocating villages out of Project Tiger boundaries was also much debated. Conservationists authoritatively claimed that such villages be removed as a "first priority" to protect tigers. A tms member pointed out that 50 villages needed to be relocated from the Satpuda Tiger Reserve; but till now only one (Dhai village) had been rehabilitated, that also by chopping down 50,000 trees! Officials of the Melghat Tiger Reserve (mtr) admitted that they had been able to relocate only 3 out of the total 22 villages within the sanctuary, and how there was no planning for the 39 villages within the multiple-use-area because of an ongoing case at the Nagpur High Court. Forest officials admitted relocation was at present being done in an ad-hoc manner, leading to further tensions with tribals.

I came to this meeting after four days in the mtr. Nagpur only strengthened my sense of how the reality of Indian forests was so different when viewed from a village within the sanctuary rather than an official air-conditioned meeting room of forest department. What H S Pabla from Madhya Pradesh said during the discussion is still ringing loud in my ears: "Till the time poor people are victims of conservation, there will be no conservation."