10 villages to get forest benefits

Maharashtra to finally give JFM villages their due, but the share is bigger, say activists 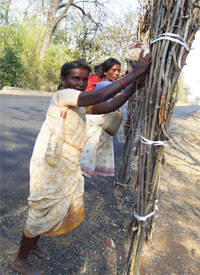 IN A first-of-its-kind move, the Maharashtra forest department has decided to pay 10 villages their share of benefits under the Joint Forest Management (JFM) scheme. A total of Rs 74,51,063 will be paid to eight villages in Gadchiroli district and two in Gondia district. The amount will be paid from the 7 per cent forest development cess that is deducted from the income from forest produce. A letter written by the joint secretary to the principal chief conservator of forests on May 24 shows this.

As per the JFM scheme, villages must get their share of the forest produce. However, no village has received it ever since the scheme was introduced in 1992. Pravin Pardeshi, principal secretary of the forest department, told Down To Earth that the step was delayed because of the government resolution in April 2003 on JFM which allows payment to villages only after they have protected forests for at least 10 years. “Since the dues are till 2013, payment cannot be made under JFM head. Hence it was decided to pay the money from the forest cess, a district-level development fund for forests. JFM committees protect forests and have the first claim on it,” he said. More villages under the JFM scheme will be similarly paid in phases, he added.

Pardeshi does not find the first government resolution beneficial for the villages because it does not provide for entitlements from major timber. However, section 9 of the 1992 government resolution reveals this is not true. It clearly states that all produce from JFM forests, including timber, will be given to JFM committee members on priority basis for nistar needs, communities’ right to use forest produce. Fifty per cent of the proceeds from the remaining produce will be given in cash to the committee, it says.

“The department is deliberately underplaying the original government resolution and shortchanging villagers,” alleges Hiralal. The letter does not give a detailed year-wise and produce-wise break-up of the revenue earned from each village’s forest, he says. “It is not enough to give money to villages. There should be transparency in records and gram sabhas should be apprised of how the amount has been calculated. Approval should be taken from the gram sabhas regarding this,” he says. In a letter to the principal secretary, Hiralal has asked for a detailed account of all this on the department’s website. Besides, he has demanded that in future a system should be evolved so that JFM committees get their share immediately after forest produce is sold.

Hiralal’s suggestion regarding disbursement of detailed accounts to the gram sabhas has been accepted and will be implemented immediately, says Pardeshi. Regarding future payment of entitlements he said the latest government resolution of October 5, 2011 provides for annual remittance of JFM committees’ entitlements immediately after sale of forest produce. But he did not say whether JFM accounts will be displayed on the department’s website.