A bunch of saps

Will a recent conference help to compensate the victims of jackboot and power-blinded national afforestation policies? 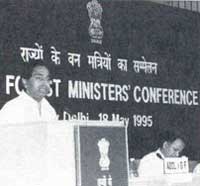 Inaugurating the conference, the Union minister for environment and forests, Kamal Nath, expressed his dissatisfaction with the compensatory afforestation efforts. "It is a legal requirement to compensate for forest land diverted to non-forest uses, and comes within the purview of the Forest Conservation Act of 1980. But against a stipulated area of 4 lakh ha, the compensatory afforestation has been done in about 2 lakh ha," Nath said.

Subsequently, the state ministers insisted that the plan allocation for forestry be enhanced to at least 2 per cent of the gross public sector plan outlay, which has fallen to an all time low of O.84 per cent.

Proper management of the Indian Forest Service cadre by various states and union territories through timely cadre reviews, timely forwarding of confidential reports to the government of India, nominating suitable officers and ensuring their timely promotions were also among the issues discussed.