The Siberian forests are facing the axe from a Russia eager to top the financial potencial of its timber. 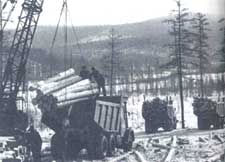 FOUR million ha of the Siberian coniferous forest, the taiga, are cut down every year, and it is feared that this may shortly increase as controls on logging disintegrate after the break-up of the former USSR, says a report prepared by Armin Rosencranz and Antony Scott of the Pacific Energy and Resource Centre, which was published in Nature (Vol. 355 No. 6358). Siberia accounts for 54 per cent of all coniferous forests and 21 per cent of all forested area in the world.

The forests have been governed by the All Union Land Code, administered by the erstwhile Soviet forests ministry in Moscow, under which only 8 per cent of total forested area is protected from felling. Tree felling is partially restricted in another 24 per cent of the taiga, which was proposed to be raised to 27 per cent prior to the collapse of the USSR. Now, the Russian republic, which includes Siberia, claims it owns the forests.

The Siberian forest extends over nearly 6 million sq km, accounting for the world's largest timber supply. It also acts as an enormous "carbon sink", with about 60 billion tonnes of stored carbon.

A cash-strapped Russia is now eager to tap the taiga's vast economic potential. An agreement was signed earlier this year with the Japanese company, K S Industry Co, and negotiations are on with other Japanese, European, Korean and US timber giants such as Louisiana Pacific, Weyerhauser and Georgia Pacific. The recent completion of the Baikal Amur mainline railway will provide further access to logging activities.

Timber accounts for as much as 14 per cent of Siberia's regional production and 80 per cent of the wood is exported. Outdated forestry practices aggravate the situation by cutting down more trees than would be required with efficient logging. The damage is further compounded by poor regeneration of trees because of the harsh climatic conditions prevailing in the region -- average tree growth here is two to three times slower than in the rest of the former USSR.

Despite all such negative factors, Russia seems set on ignoring the long-term costs and opting for short-term gains from the taiga.