The Hasdeo forest covering Chhattisgarh’s Korba, Sarguja and Surajpur districts, is a noted migratory corridor and has a significant presence of elephants 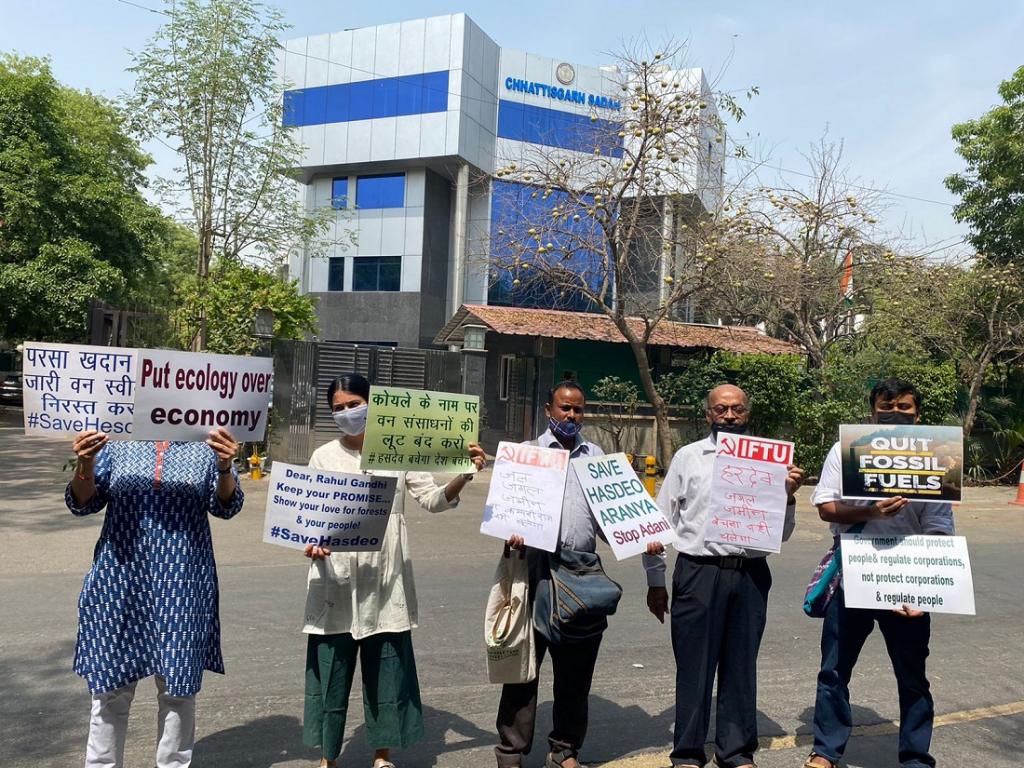 Environmentalists stood in the sun at the Chhattisgarh Sadan from 10 am to late afternoon on April 11, 2022, protesting the second phase clearance given to the mining projects in Hasdeo Aranya.

The Chhattisgarh government has also given the final clearance for the Parsa coal block and the second phase has also been allowed for the Parsa East Kete Basen coal mine.

Both are owned by Rajasthan Rajya Vidyut Utpadan Nigam and operated by the Adani Group, environmentalists told Down to Earth.

“The government promises to increase green cover and carbon sinks and phase out fossil fuels at international conferences like CoP26. On the other, it gives orders for the destruction of forests with rich-biodiversity,” Bhavreen Kandhari, environmentalist, who was present during the protest, said.

Read: Will Chhattisgarh’s proposed elephant reserve have a smooth corridor

Environmentalists protested against the Stage II clearance for the Parsa coal block, that will uproot the lives of around 700 families form six villages in Chhattisgarh.

Environmentalist Bipasha Paul from Chhattisgarh told DTE that the protest happened after green activists came to know that the state government had decided to give the Stage II mining clearance to the project.

This, even when the locals had submitted a memorandum to the state governor and she had given orders for investigation in the matter of fake clearances.

Ram Lal, a local farmer from the Sahli village of Chhattisgarh told DTE that he, along with people from other villages were protesting the fake clearance that the authorities got from the Gram Sabhas or village assemblies for coal mining.

“When the authorities could not convince the Gram Sabhas for giving project clearance because of pressure from the locals, they conducted a closed-door meeting and pressurised the sarpanches or village chiefs to sign the consent documents, which are fake. We are protesting this injustice,” he said.

The villagers have been staging a protest since March 2, 2022, against these orders of clearance by the Gram Sabhas.

“For the last three years, the affected communities of the Parsa coal block have been regularly highlighting the issue of fake Gram Sabhas, on the basis of which, the forest clearances have been processed,” activists said in a press statement April 11.

“The entire affected community also sat on a 75-day dharna or sit-in in December 2019 and carried out a 300 km march to Raipur, asking the state government to take cognizance of the matter and take action,” it added.

We gave letters to the Sub-divisional Magistrate, Collector and even Chief Minister Bhupesh Baghel and Governor Anusiya Uike who initiated an investigation into the matter. But despite our 300 km walk from Korba to Raipur, the state government gave the final clearance for the project. This will lead to the destruction of around 840 acres of dense forest and affect the biodiversity of the region.

The Hasdeo forest covering Chhattisgarh’s Korba, Sarguja and Surajpur districts, spans an area of 170,000 hectares. It is a noted migratory corridor and has a significant presence of elephants.

It is also the catachment area of the Hasdeo river, the largest tributary of the Mahanadi. The area was declared as a ‘No-Go Zone’ for mining by the Centre in 2009. Despite this, mining in the region continued as the policy for the ‘No-Go Zone’ was not finalised.

Chhattisgarh Governor Anusuiya Uikey had even written to the state government asking for an enquiry into the entire issue of fake / forged Gram Sabha consent letter and ordered that no action be taken pending such an enquiry. Unfortunately, the Bhupesh Baghel-led state government has been eager to process fresh approvals, ignoring due processes as well as constitutional propriety.

“The issue of final approvals pending the enquiry into the fake Gram Sabha issue, is a blatant disregard and violation of the legal and constitutional rights of Adivasis enshrined under the Provisions of the Panchayats (Extension to Scheduled Areas) Act 1996, Forest Rights Act 2006 and the provisions of Schedule 5 of the Constitution.”

Environmentalists also called out Rahul Gandhi, who in 2015 visited the Hasdeo Aranya to lend solidarity to the communities’ resistance against mining.

“He had assured thousands of Adivasis that he and the Congress party will ensure that no injustice is done to the local communities in the name of development and their constitutional rights are duly protected,” the note read.

“Unfortunately, once in power, two Congress Chief Ministersl, Bhupesh Baghel and Ashok Gehlot have co-conspired to destroy Hasdeo forests for the benefits and greed of Adani,” it added.