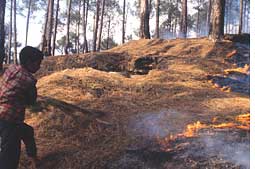 The Himachal Pradesh forest department has decided to reward community initiatives in the state that are successful in averting forestfires. The annual reward would vary between Rs 5,000 and Rs 10,000, depending on how successful a joint forest management committee is in checking fires.

The programme for giving cash rewards for preventing forestfires was started in the State's Great Himalayan National Park in Kulu district by involving people living in 11 villages. There have been no fires in this region in the past three years after the programme started. It is now being extended to 200 villages spread across Kangra, Hamirpur, Una and Bilaspur districts. A committee will get the maximum reward if there have been no forest fires in a year. In case of one fire, the committee will get two-thirds of the prize money.

"It would be good to monitor the fires by satellite. Except for very small fires, most fires are caught in satellite images because of the heat produced. This could be monitored on a daily basis and based on the number of fires, payment could be made," said Chetan Agarwal, head of the natural resource management unit, Winrock India.

More than half the forests in India are prone to fires. "Most of the fires are started by humans. We hope this cash incentive will make villagers take greater care when they are in the forest," said Vinay Tandon, state principal chief conservator of forests.

The forest department will administer the project under the fire management programme being funded by the Centre and the state.