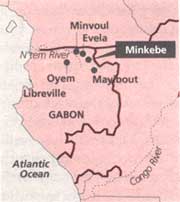 Lying at the heart of Africa's largest and last belt of rainforest is the Minkette equatorial forest, which is home to Gabon's pygmies. But environmentalists fear that it may soon become endangered with the onslaught of development. A few dozen miles from the northern Gabonese village of Evela - which is bordered by the equatorial forest - roads are being paved to provide better access to the area. Logging companies in Gabon's capital, Libreville and Europe see a vast Potential in this pristine forest, At the same time, various environmental groups are racing to prepare a list of plant and animal species and to define areas for strict conservation. They feel that what happens to this jungle in Gabon will have serious repercussions on the rest of Africa's last major belt of pristine rain forest, which is spread over an area stretching from the equatorial coast across Gabon to the Congo river basin in Zaire.