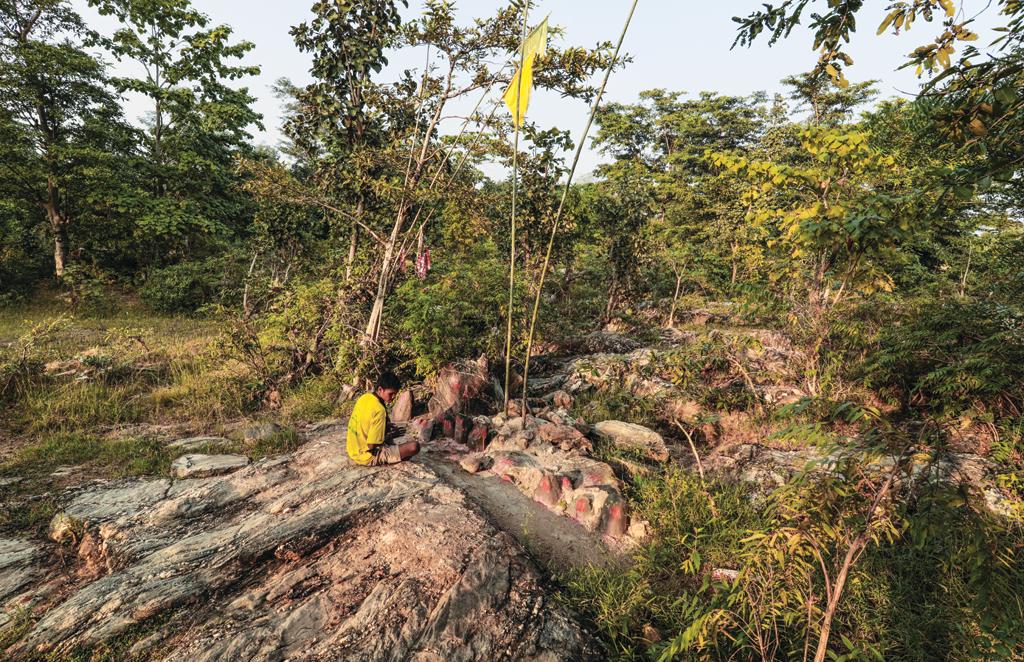 A sarna sthal at Lupunguttu village in West Singhbhum district. One has to cross the swirling Roro river over a tree branch to reach here

It’s that time of the afternoon when the sun casts a golden glow and thousand rays exude a soft glimmer. After a hearty meal at a roadside dhaba in Jharkhand’s Torpa block, we proceed along a narrow, gravelly road towards the sarna sthal or sacred space of the Munda tribe. Two guides accompanying us request to quicken our steps so that we reach there before dusk. The entire Khunti district is conflict-hit where the People’s Liberation Front of India, a splinter group of the CPI-Maoist, rules the roost. About 10 minutes later, we reach a dense patch of sal (shorea robusta), mahua (Madhuca longifolia), peepal (Ficus religiosa), banyan (Ficus benghalensis) and several other tall, semi-deciduous trees on the outskirts of Salgadih village. “This grove, spread over a hectare, is our sarna,” says Sanika Munda, one of the guides and resident of Salgadih.

As we enter the grove, withered leaves and dried twigs snap under our feet breaking the heavy silence. I can faintly hear unknown species of birds chirping. A huge sal tree stands tall in the centre. Sanika says the tree could be over five-century old and is worshipped to invoke Singh bonga, the Almighty. Orange mushrooms adorn its gnarled branches that cover the ground. Sanika warns us against lopping a branch or even plucking a leaf in the grove. “Last year, someone from the nearby Habodi village felled a tree inside the sarna. That night, a tiger carried away his cattle. Hurting a tree in the grove can also lead to diseases and death,” says Sanika, adding that the sarna at Salgadih has been there since the Mundas first settled there.

The Munda tribe traces its lineage to Mohenjodaro and Harappa civilisations. It is believed that the Aryans armed with sophisticated weapons displaced the Mundas and chased them as far as Azamgarh in Uttar Pradesh. The tribe being fiercely independent crossed the Narmada and Son rivers to enter Jharkhand, and settled down near Sutiambe on the Patratu-Ranchi road, about 20 km from Ranchi, some 2,500 years ago.

Sitting in a plastic chair in front of his house in Khunti’s Lohajimi village, octogenarian Soma Munda narrates how the original settlers released a red hen and a rooster in the nearby forest full of wild animals and placed a ghada (clay pot) full of water under a tree. In the morning, the birds were seen freely roaming about; the water also remained untouched. This indicated that the place was safe for the Mundas to settle down. The tribe cleared some patches to establish villages and farmland, and protected the remaining as sarna.

According to Soma Munda, there are 12 types of sarnas, the most predominant being the baha or sarhul sarna. It is believed that worshipping it brings prosperity and wealth to the village. Other important sarnas are chandi sarna, mahadani sarna, keda sarna, bheda sarna and gumi sarna. “Every village in Torpa has at least three types of sarnas. Animal sacrifice is an integral part of our festivals held inside sarnas. Hens, goats, sheep and sometimes even buffaloes are sacrificed,” Munda says. The popular belief is that offering puja in mahadani sarna subjugates one’s enemies. Soma, who has been leading the Koel Karo Jan Sangathan (KKJS) against the proposed Koel-Karo hydropower project in Khunti, recalls an incident when land survey officials in charge of the project fell ill and eventually left the place after the residents offered puja in mahadani sarna.

Vijay Gudia, the general secretary of KKJS, proudly says Lohajimi, the site for the proposed Karo dam, has all the 12 different sarnas. Though the project was scrapped in 2003, a sense of fear underlies his perfectly unruffled composure since the Union government has announced to revive the Kutku Mandal dam on the North Koel, 20 years after it was shelved. If the Koel-Karo project is revived, it would submerge the sarnas of Lohajimi, he says, pointing at the Karo that flows just a kilometre away. 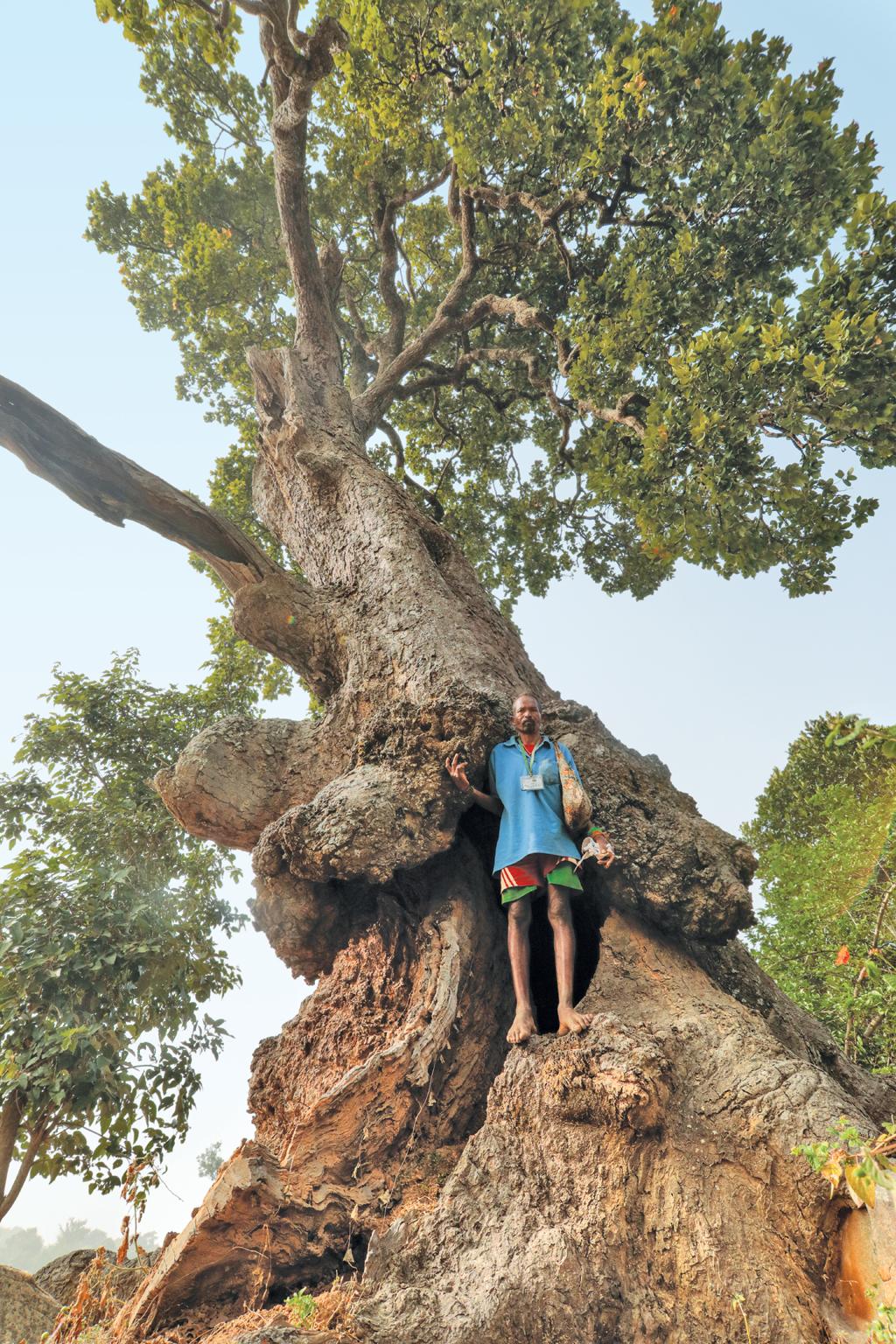 Similar fascinating stories surround the sacred groves of Jharkhand. In West Singhbhum, the land of Hos, the Singhaso buru mountain reigns supreme among all groves, called jaherthan or disauli by Hos. Sunayna Boipai, a tribal language teacher at the Tata College in Chaibasa, says, “All Gods who protect us or aid us during hunting reside in the mountain, and we invoke them while offering prayers.” Inside the forest, trees like Sal, Arjun (Terminalia arjuna), tendu (Diospyros melanoxylon), kususm (Schleichera oleosa ) and jamun (Syzygium cumini) abound. The majesty of Singhaso buru can be felt at Omonderi village where we are barred from entering the forest. Village residents say only those who have kept a fast visit the forest and its caves accompanied by the priest. They believe that Singhaso buru protects West Singhbhum. The faith in Singhaso buru is equally strong in distant villages like Lupunguttu. “Entering the forest without permission will bring harm to the person as well as communities,” says Savitri Deogam, a Ho woman, from Lupunguttu.

A sarna called Matka Mahato in Saitab village on the Chaibasa-Chakradharpur offers an interesting sight. Here two Arjun trees have joined at the branches and are growing as one. The pattern resembles palms folded in prayer. Couples visit the tree to seek its blessings so that they remain united forever. Village residents say no one collects wood from the sarna. The belief is if someone fells a tree in the sarna, his cattle would die. No one is allowed to consume tobacco or liquor inside the sacred grove. Writing on tree trunks and lopping of branches are forbidden. Sursingh Angaria, a resident of Siria putti tola, a revenue village just across the road, recalls that a few years ago contract labourers of the public works department camped at the sarna spot while constructing a small overbridge next to the road. But the residing deity did not allow them to camp without permission of the gram sabha (village council). At night, the labourers saw a spirit coming out of the forest and fled the camp next morning. Even buses do not ply the Matka Mahato road late at night or early in the morning, says Prabhat Khandiyan, another resident. “We have a ritual to appease the forest spirit. Two days before the Mage porob (the principal festival of Hos celebrated in December-January), we make animal sacrifices before the Matka Mahato disauli,” he adds.

In nearby Gararajabasa village in Khutpani block, people even consider the birds of the sarna auspicious. Gindari (Ardeidae family) birds that visit the sarna during the monsoon make nests atop the kusum tree and stay there until the winter. They are believed to bring prosperity to the village. “No one kills the birds. Three years ago, a tree branch fell on a person killing him while he was trying to hunt the birds,” says resident Sidhio Bandra.

The strong beliefs show that sacred groves are much more than a patch of forest in Jharkhand. For tribals, sarnas are part of their cultural, social and ecological consciousness. In June-July, just before sowing paddy, the Mundas celebrate Batauli puja inside sarnas. The pahan or priest sows rice seeds a week before the puja and worships the saplings inside the sarna, invoking Singh bonga to ensure a good harvest. The three-day Sarhul festival, celebrated during the spring, is also woven around the sarna. Though cooking is allowed inside the grove during festivities, eating is strictly forbidden.

All these spring from a deep-seated reverence towards sarnas. At places communities have opposed attempts to alienate them from sarnas. In 1990-91, there was a plan to erect a boundary wall around the sarna sthal at Birsa Munda zoo in Ormanjhi, Ranchi. But local residents of Chakla and other adjoining villages protested against the move. A few years later, an agreement was reached between the zoo authorities and the locals. Almost a metre high wall with iron grill was permitted at the spot to protect the sarna. 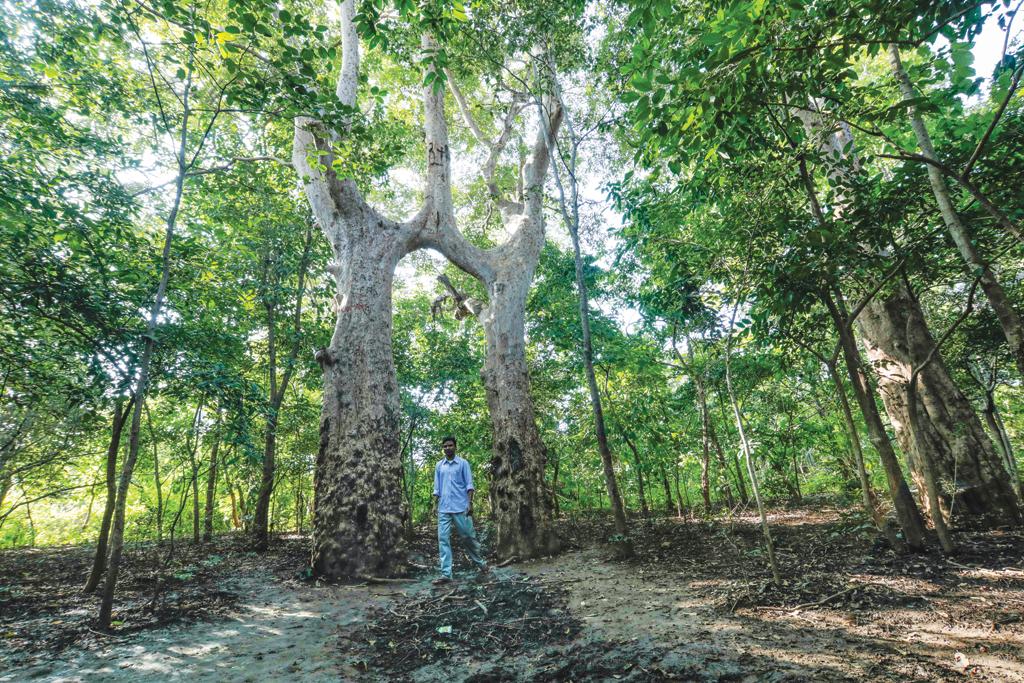 A separate gate was also constructed for entry. On the day of Sarhul, locals are given free entry to the zoo. The sarna has been left intact even though sal trees belonging to the forest department dominate the place.

At Serangbil village in Tantnagar block, West Singhbhum, a boundary wall protects the sarna. “People sometimes make them dirty. So walls are needed to protect them,” says Sibnath Biruli, a resident. In Ranchi, the Yuva Sarna Samiti (YSS), a people’s organisation, has taken on itself the responsibility of safeguarding the sarna in Simratoli and is fencing it. “All members strive to keep the sarna clean. The wall would prevent people from using the place for drinking and playing cards at the sarna sthal,” says YSS member Amit Tirkey. YSS now plans to display paintings at the spot to showcase tribal culture.

In July, the Jharkhand government launched an initiative to protect and beautify sarnas outside forest areas. Under the initiative, known as gherabandi, the government has identified 575 sarnas on community or individual lands and has begun the process of fencing those and setting up platforms around trees that are worshipped. “The maintenance of sarnas is needed for social, cultural and religious beliefs as well as ecological benefits of the environment,” says L R Singh, Principal Chief Conservator of Forest (wildlife). However, till now no study has been done to estimate the ecological value of sarnas in forest lands.

But many feel the initiative is an eyewash. Identifying sarnas is probably a tactic of the government to include those in its land bank, a pool of common land created to woo private investors, says Ho language expert Dobro Buriuli from Chaibasa. In Lohajimi, the government has put about 60 hectares (ha) of common land into the land bank. Out of this, about 3 ha belong to sarnas, a study by social activist Stan Swamy says. Religious beliefs and taboos around sarnas are a way of protecting the forest, its ecosystems and wildlife from undue human interference, says Boipai. Our belief is the reason forests still stand tall in Jharkhand.