Women in Chhattisgarh recreate ‘Chipko movement’ to save Hasdeo Aranya

Activists claim more than 200,000 trees spread across 841 hectares of forest will have to be chopped down for the mining projects planned in the area 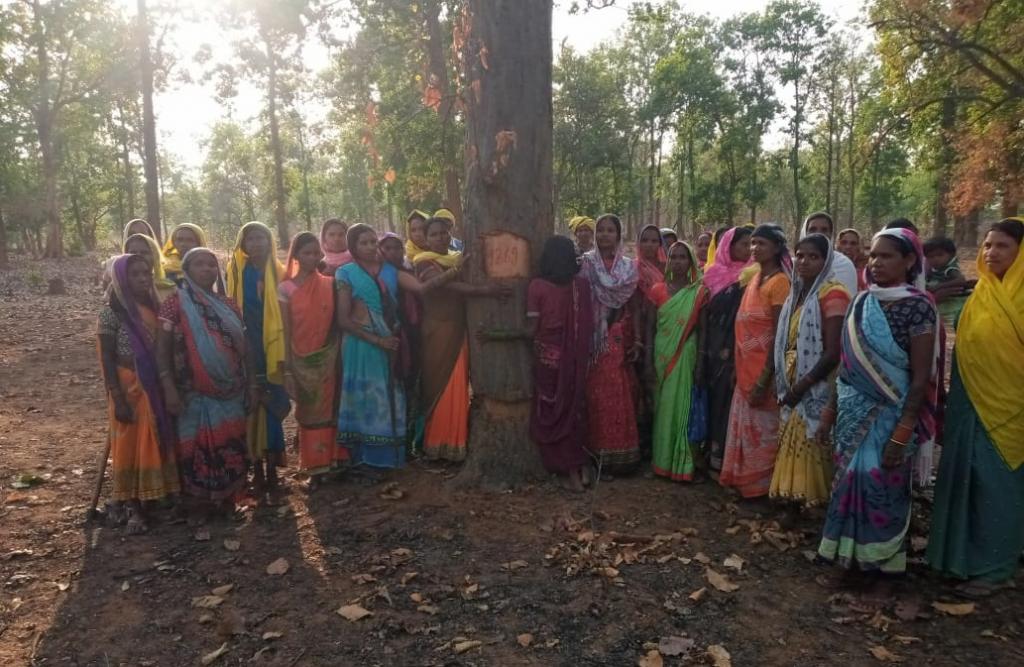 Local women in Surajpur district of Chhattisgarh started a tree-hugging campaign on the morning of April 26, 2022, as they were being cut for the mining project in Hasdeo Aranya, activists told Down To Earth.

The felling of tress in the Surjapur district started after the Chhattisgarh government gave the final clearance to the second phase of the Parsa East Kete Basen coal mines on April 6. Both projects are owned by Rajasthan Rajya Vidyut Utpadan Nigam and operated by the Adani Group.

Local women in Janardanpur village received news on April 26 that the forest authorities and district administration officials were about to cut trees. They reached the spot and hugged the trees as a sign of protest.

“The authorities went back during the day, when they saw the locals vehemently protesting, but came back before the break of dawn, at 3 am and felled around 300 trees in Janardanpur,” Alok Shukla, convener of the Chhattisgarh Bachao Andolan, a non-profit, told DTE.

He added that people in the village had been protesting against the project for a long time and had been on an indefinite protest since March 2.

But the state had given clearance for the project despite the people’s appeal to the chief minister and governor to look into the fake consent papers that the authorities had got the Panchayat secretaries to sign in 2019.

Activists have assessed that more than 200,000 trees will have to be axed for the mining in the Parsa coal block to begin.

“According to the clearance report by the forest advisory committee, 95,000 trees will be cut for the project. But according to our assessment, more than 200,000 trees spread across 841 hectares of forest will have to be chopped down.

“This project, spread over 1,200 hectares, will lead to a displacement of around 700 people from Fatehpur, Hariharpur and Saili villages of the Sarguja and Surajpur districts,” Shukla said.

The villagers, who have lost 300 trees in the area, are now planning to keep a watch at night and stay connected over the phone with others, Ramlal Kariyam, a local activist, said.

“When the authorities saw that the people had gathered there during the day, they stopped the felling of trees. But now, we are scared that they will come and cut the jungle at night.

“Some of us have decided to stay back and be in touch with others so that even if they come with their axes, they will be unable to go ahead with the deforestation,” he said.

He added that there had been no intimation to the locals that the authorities were coming to fell the trees and when they protested during the day, the authorities wanted to talk to them to convince them to go home.

“This forest is the lifeline of the Adivasis here and we will protect it at all costs. This project has been given clearance without our consent and they should not go ahead with the project,” Kariyam added.

Shukla said around 80 per cent of the villagers from the three villages had not even accepted the compensation that they were offered against the diversion of the forest land as they do not want to leave the forest to this fate.

The entire affected community also sat on a 75-day sit-in in December 2019 and carried out a 300 km march to Raipur, asking Chief Minister Bhupesh Baghel and Governor Anusiya Uike to take action against the forged Gram Sabha consent letter, on the basis of which the forest was given a green signal.

“The governor had ordered for an enquiry into the matter. In this case, when the Gram Sabha letters are fake, the state should talk to the locals and take their statements. But, so far, nothing has been done to investigate the matter,” Shukla added.

The Hasdeo forest covering Chhattisgarh’s Korba, Sarguja and Surajpur districts, spans an area of 170,000 hectares. It is a noted migratory corridor and has a significant presence of elephants.

It is also the catchment area of the Hasdeo river, the largest tributary of the Mahanadi. The area was declared as a ‘No-Go Zone’ for mining by the Centre in 2009. Despite this, mining in the region continued as the policy for the ‘No-Go Zone’ was not finalised.