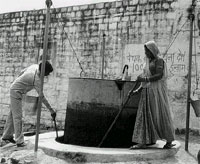 in the 1980s, a few institutional and community biogas plants were set up in some villages by cooperating centres of the Indian Council of Agricultural Research ( icar )-sponsored All India Coordinated Research Project. Islampur village in Bhopal was one of the villages selected.

As in any other village, cowdung had only two uses -- fuel, after converting it into dry cakes, and organic manure. All this changed with the setting up of the community biogas plant ( Farmer and Parliament , Vol 36, No 10).

Installed in 1998, the floating drum-type biogas plant has a capacity of 85 cubic metre (m 3 ). The village maintains around 300 milch cattle. Till 1995, the gas produced was regularly supplied to 52 families who worked and lived close to the plant. The spent slurry was used as manure for various crops. However, a major technical problem developed in the plant and biogas generation dropped drastically from an average of 50-70 m 3 to 5-7 m 3 per day.

A year later, a major programme for repair and recommissioning of the plant was undertaken. The plant has since been working satisfactorily. About 21 quintals of cowdung thoroughly mixed with an equal quantity of water is fed into the plant everyday. The gas yield has been reportedly varying from 45-67 m 3 per day depending on the season. This gas is supplied to the local people for domestic cooking twice a day, which is equivalent to saving about 112 tonnes of fuelwood/agro-residues per year, while the digested slurry is being used for cultivation.

Extensive field trials carried out at various centres of the community biogas project revealed that about 50 per cent of the recommended dose of inorganic nitrogen fertiliser can be replaced by biogas slurry without significantly affecting crop yields. Besides, application of the spent slurry along with inorganic fertilisers resulted in better soil health. Thus, the plants have been helping conserve precious forest and chemical fertilisers and reduce environment.