As terrorists arm themselves with biological weapons, India wakes up to find how ill equipped it is to face this deadly reality 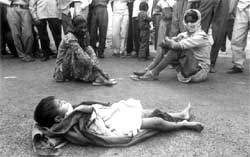 the attacks on the World Trade Centre in New York, usa, have not only changed the skyline of world's business capital, but also the world's perception of terrorism. Even as shocked Americans came to terms with the attacks, the us government issued warnings of a possible attack by terrorists using biological weapons. The world is suddenly waking up to the reality of bio-terrorism -- the use of biological weapons by terrorist groups for mass devastation.

An old victim of terrorism, India is also catching up with the reality only to find how badly it is equipped to fight it. At a recent workshop organised by the Delhi-based National Institute of Communicable Diseases (nicd) on bio-terrorism, experts agreed that the threat of biological weapon attacks by terrorists in India is real and strongly suggested an effective surveillance mechanism.

Biological weapons include the use bacteria, viruses, fungi or their toxins to cause large-scale death or disease in humans, animals or plants. As these weapons are easy to produce and are cost-effective, experts say that terrorist groups can acquire them easily. Some of the countries that have active biological weapons programmes include usa , Russia, Iraq, Libya and Syria.

The workshop was held a week after the attacks on usa . Given the secrecy that the government maintains in dealing with such a strategic issue, the workshop was rather unusual and dwelled extensively on India's preparedness to face any biological weapon attacks. The participants were from defense research organisations, medical officials from border states, defense analysts and biologists. The objective was to develop a surveillance mechanism for pathogens with biological warfare potential.

"There is no documented evidence of the use of biological weapons in India, but it doesn't mean that there is no threat," says K K Datta, director of nicd , which is developing a surveillance mechanism for pathogens with biological warfare potential. Datta mentioned a mysterious fever outbreak in Siliguri, West Bengal, which killed than 20 people, a few months back. nicd had suspected it was a mutating measles virus, but recently, the Centre of Disease Control, usa, identified the virus as a Malaysian origin. "It could be a case of bio-terrorism," surmises Datta.

According to A Nagendra of the Armed Forces Medical College, Pune, the cost effectiveness and easy access increases the risk of terrorists using biological weapons. It costs just us $1 to target one sq km of area with biological weapons, when the use of conventional weapons would cost a whopping us $2,000. That the threat is for real can be gauged from the fact that the government has finally decided to devise a strategy to deal with this problem through this workshop.

What will make detection of biological weapon attacks difficult is that India doesn't even have the basic infrastructure for surveillance due to which, even the most common of the epidemics go unreported and undiagnosed and just called 'mysterious'. Realising the seriousness of the threat, the government has recently decided for a surveillance of border states for possible bio-terrorism attacks. Says Datta, "We want to extend this surveillance all over the country."

India is planning for a national survelliance system for detecting biological weapons attacks. With the nicd as the nodal agency, the system hopes to integrate the different components of the health sector including the military hospitals and the private practitioners. "It is important that the policy is implemented swiftly in view of the current problems," says H V Batra of Defence Research and Development Establishment, Gwalior, referring to the attacks on usa .

What calls for a more stringent surveillance mechanism is that bio-terrorism might make use genetically modified organisms, instead of the natural ones found in the environment, believe experts. "Such modified organisms cannot be identified by conventional methods and would require a long time to be identified," says S C Arya of Centre of Logistical Research and Innovation, a New Delhi-based organisation dealing with dissemination of information regarding microorganisms and vaccines. However, Datta is optimistic about an early installation of a surveillance structure. "By the end of Tenth Plan, we plan to put in place an appropriate surveillance mechanism by improving the existing system," says Datta. Till that time India remains as vulnerable to diseases as to biological weapons attacks.