The anti-corruption department raids the houses of a former Maharashtra minister, who put social activist Anna Hazare behind bars for accusing him of corruption 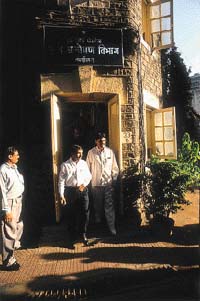 retribution caught up with former Maharashtra minister Baban Gholap when officials of Maharashtra's anti-corruption cell raided numerous residential premises and a farmhouse owned by him on July 1. Just a year ago, noted Gandhian and social activist Anna Hazare had levelled corruption charges against Gholap. At that time, the minister filed defamation charges against Hazare and put him behind bars.

The raids were simultaneously carried out at the Devlaligaon chawl belonging to Gholap's mother-in-law, Muktabai Bankar, his new apartment at "Shivsphurti" on the Nasik-Devlali Camp road and his office in the same apartment. The raids followed a public interest litigation ( pil ) filed in the Bombay High Court by lawyer-activist Jannardhan during Gholap's tenure as minister. The pil alleged that Gholap had amassed wealth disproportionate to his income. Besides, Jannardhan also expressed concern that since Gholap was a minister at the time of filing the case, he was in a position to influence the investigating agencies. Two months ago, Gholap resigned following instructions from his own party, the Shiv Sena.

According to Pradeep Munut, a Pune-based journalist, Gholap's wife said the raids were a violation of human rights as they were carried out without informing the owner of the properties. Gholap himself was not available for comment. The investigating agency officials also refused to reveal the outcome of the raids.

Last year, when Hazare accused Gholap of corruption, the latter took Hazare to court. But Hazare could not 'prove' the charges he had made against Gholap. The court gave Hazare two options: either apologise or go to jail. Hazare stuck to his guns and went to jail. Soon after, the government was forced to release him due to an overwhelming public support.

Speaking to Down To Earth in Delhi, Hazare said the raids vindicated his stand. Hazare, however, was quick to point out that the raids may be a government ploy to give Gholap a clean chit at a time when elections are only a couple of months away. "The case must be handed over to the Central Bureau of Investigation as the anti-corruption department falls under the state government and the inquiry may be influenced by Gholap and his colleagues in the government," he said. When asked about what action he intends to take in this regard, Hazare said he was awaiting the outcome of the inquiry. "I may even undertake a five-day hungerstrike against corruption," said Hazare.