At this rate, the region will not achieve any of these SDGs by 2030

The Asia-Pacific region is moving extremely slowly on more than half of the United Nations-mandated Sustainable Development Goals (SDGS), most of which are environmental, a new report on SDG progress prepared by the United Nations has found.

Targets where pace has slowed are linked to natural resource management, including sustainable food production, populations suffering from water scarcity, renewable energy, management of chemicals and wastes, and the loss of biodiversity, to name a few.

Among these, hazardous waste generation, the reduction in forest areas and the extent of permanent water bodies are three SDG indicators which are predicted to regress the most by 2030, compared to 2015.

At this pace, Asia and the Pacific will not achieve any of the 17 SDGs by 2030 says Armida Salsiah Alisjahbana, under-secretary-general of the UN and executive secretary of ESCAP. If that situation is to be avoided, progress on many environmental targets will require a complete turnaround. 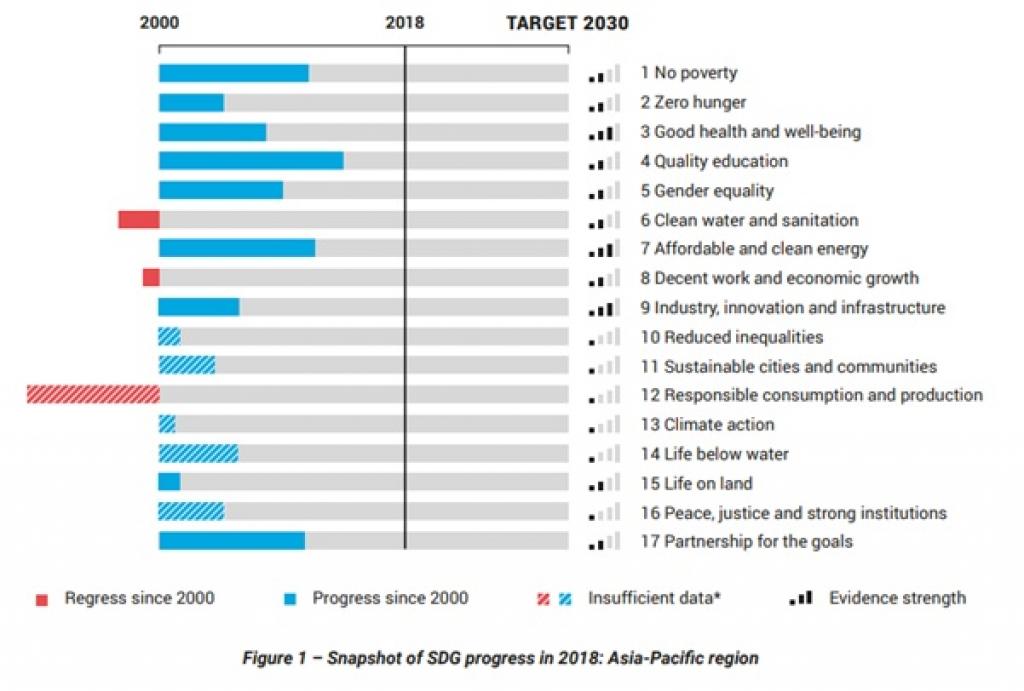 Within the Asia-Pacific region, each sub region needs to reverse existing trends for at least three goals. Interestingly, the three sub regions of South-East Asia, South and South-West Asia and East and North-East Asia, which are home to most of the continent's population, are not speeding up urgent action in order to combat climate change and its impacts.

Launching the report, Alisjahbana called for urgent action to reverse these negative trends. “I hope this report will contribute to targeting our efforts to accelerate progress towards all goals and to strengthen the region’s commitment to improving the quality of data and statistics essential to measuring progress,” she said.

The region has made progress towards ending poverty (Goal 1) and ensuring that all have access to quality education and lifelong learning (Goal 4). Measures are also underway to achieve affordable and clean energy (Goal 7). It is also on track for many indicators of good health and well-being and may be able to achieve the 2030 SDG targets at the current rate. Yet even where good progress has been made, reveals the report, it is too slow for these goals to be met by 2030.

Data is available on only 26 per cent of 85 gender indicators, says the first review of the status of women and girls in the Asia-Pacific.

Recognising this, the global forum in July 2018 highlighted the need for adequate finances to strengthen the statistical capacities — regional and worldwide. However, the lack of standards for indicators means that there is no benchmark from which to calculate a goal, potentially marring sustainable development.

But, the region can make greater use of alternative data sources to complement traditional sources such as surveys and build a more accurate picture of progress towards the SDGs, says the report. Experts at the UN World Data Forum in held in October 2018 had also suggested Voluntary National Reviews by drawing upon non-traditional data sources including administrative, geospatial, and civil society data.

The report called upon the Asia-Pacific region to strengthen its global partnerships and means of implementing the 2030 Agenda for Sustainable Development (Goal 17). This call for global collaboration resonates with the Dubai Declaration signed by global leaders in October 2018, that reiterated the need for national and worldwide political will for the world to achieve better data outcomes for SDGs.

The SDGs are a collection of 17 global goals set by the UN General Assembly in 2015 for the year 2030. They aim at improving the standard of human life in the future by working on removing poverty, hunger, lack of education, gender inequality and other impediments to human well-being.