8 months after 4 Gharghora villages filed complaints against TRN Energy and Mahaveer Energy for wrongfully grabbing their land, the police is yet to file a single FIR 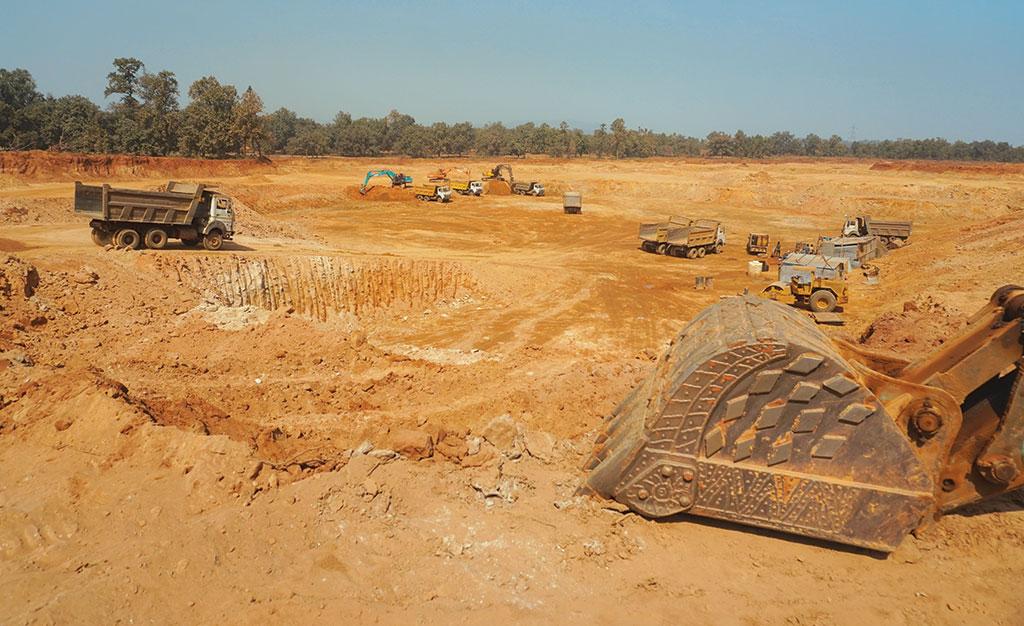 TRN Energy has continued the construction of an ash pit on land it has allegedly acquired illegally in Chhattisgrah's Katangdi village despite a High Court stay order (Photo: Ishan Kukreti)

In Gharghora block of Chhattisgarh’s Raigarh district almost everything is covered in dust and fly ash. Pervasive, too, is a sense of disgruntlement among the tribal people, dispossessed of their land by two private players—TRN Energy Limited and Mahaveer Energy Coal Beneficiation Limited. Their discontent is particularly directed towards the Schedule Castes and Schedule Tribes (Prevention of Atrocity) Amendment Act, 2016 (POA), which they hoped will help them win over the two companies.

On June 14, 2017, 98 tribal families from four Gharghora villages— Katangdih, Khokharoama, Nawapara Bhengari and Tenda—used POA to file complaints against the private companies for wrongfully grabbing their land. “So many cases of land grabbing have never been filed under POA in the past,” says Shomona Khanna, a tribal rights lawyer and former legal consultant of Ministry of Tribal Affairs In total, the two companies have dispossessed around 200 tribal familes in the four Gharghora villages—an area that runs up to 200 ha. While TRN Energy is using the land to construct an ash pit for its 600-MW coal-fired thermal power plant, Mahaveer Energy is setting up a biomass power plant.

Eight months after the complaint, the police is yet to file a single FIR. This, despite the fact, “the police has to file an FIR in land grabbing complaints, as they fall under cognizable offence and POA makes it compulsory for the police to make a charge sheet within sixty days”, says Khanna. The delay basically means the purpose of the 2016 POA amendment has been defeated. The Standing Committee on Social Justice and Empowerment, which submitted its report on the need for amending POA 1989, told Parliament on December 19, 2014, that the amendment was crucial as “atrocities against the members of SCs and STs continue at a disturbing level besides having high acquittal rates, low conviction rates and poor coordination between the enforcement authorities at the State and district level”.

“The amended Act has defined the word “wrongful” in dealing with cases of land alienation. This is an important addition because in cases dealing with the marginalised section, it is often found that the onus lies on these communities to prove the atrocity,” says Khanna.

The police claims the cases cannot be filed under POA because the Act can be used only if land owned by STs is wrongfully acquired by non-STs. And in all the cases, the companies have ensured the name on the sale deeds are of STs. “These cases do not attract the provisions of POA as it is a matter between members of ST communities. We have sent our responses with the same observation to the National Commission for Scheduled Tribes (the nodal agency to implement POA),” says Virendra Sharma, deputy superintendent of Police, in-charge, SC and ST Welfare (Special) police station in Raigarh.

“Even though giant structures are being built on the grabbed land by private companies, the police believes the land transactions happened between SC/ST people,” says D P Chauhan, a lawyer with non-profit Adivasi Dalit Majdoor Kisan Sangharsh, which helped the people to file the cases. He adds that even in the civil cases that were filed before the POA amendment, under the MP (Chhattisgarh) Land Revenue Code, the private companies are being tried. “In the civil cases, the court had asked the SC/STs whose names are given as new owners to appear on June 23, 2017. But nobody came,” says Chauhan.

“There are 186 cases registered under MP (Chhattisgarh) Land Revenue Code against companies like TRN Energy and Mahaveer Energy,” confirms Nisha Netam, sub-divisional magistrate of Gharghoda. She adds no progress has happened as government lawyers are yet to be appointed to represent the complainants. Meanwhile, TRN Energy maintains that they are not aware of any land grabbing cases against them.

While the administration hides behind legal loopholes, the people in the four villages continue to suffer. Katangdi resident Sidar Kawar has lost his entire land to TRN Energy. “On September 11, 2009, company agents came and told us that the government had already given our land to them and if we don’t sell it then the company will acquire it. They then drove me and two other residents to the residence of Sachidanand Patnaik, a TRN Energy official, where we were made to sign on blank papers,” Kawar says. He adds that the sale deed paper he was given later had a buyer’s name that he had never met and that he also did not get the money from the sale. With no land left, Kawar today stays with his relatives.

“The company officials threatened if we did not sell our land to them, then our lands would be cut off and they would not let us use the acquired land around our village,” says Haricharan Rathia of Katangdi. He says that under pressure he agreed to give 2 ha of his 20 ha land to the company. “When the final registry came, it said I sold the entire 20 ha. The document has clearly been forged,” he says. He adds that he was called to the house of the agent for the final paperwork instead of the land registrar office. “Some registries were done on a Sunday, how is that possible?” he asks.

In the nearby Bhangeri village, sarpanch Pavitri Majhi is agitated. What used to be her backyard is now a vacant plot cordoned off by TRN Energy. “The agents of the company would come to our homes late in the night and then refuse to leave. Many times they got people drunk and got their signatures,” says Majhi. She says when she tried to complain to the district officials, the company gave her death threats and the police refused to file an FIR.

Majhi says that the administration and the company are working hand in glove. “We got a stay order on the construction of an ash pit by TRN Energy in January this year from the High Court, yet, the work continues unabated,” says she.

While the stay order clearly talks of a stay on construction, Netam says the order only talks about stopping the felling of trees. The residents in August 2017 filed a separate case under the Code of Criminal Procedure Section 156 (3) against the Police for not filing FIRs under POA.

Despite three separate cases going on to reclaim their land, the people are fast losing faith and the companies continue with their projects unfettered.

(This article was first published in the 1-15th March issue of Down To Earth under the headline 'Opposing act').