There has been a massive spike in constructing toilets in record time in Gonda district, but it remains to be seen whether it would lead to real gains in making the district open defecation free 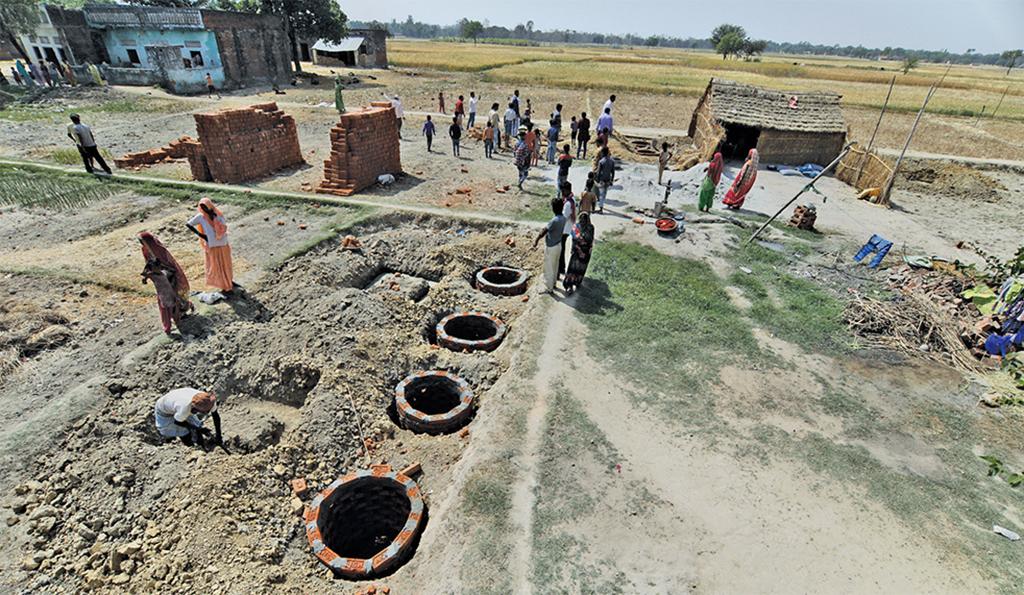 When Prime Minister Narendra Modi, during the 'Satyagraha Se Swachhagraha' event in Bihar's Motihari district on April 10, congratulated the state government for building 850,000 toilets in a week, he, perhaps, missed a point: presence of toilets is not the only yardstick to measure sanitation status. If we look at the Ministry of Drinking Water and Sanitation's data for Barh block (which has Barh town, Bihar Chief Minister Nitish Kumar’s constituency), it becomes evident that the mission of ensuring 100 per cent household toilet coverage will be completed by April 2020—as opposed to 2051 previously estimated—considering the rate of construction remains the same as that of 2017-18.

In Patna district, the rate of construction of toilets increased by three times, five times and 19 times in 2015-16, 2016-17 and 2017-18 respectively, in comparison to 2014-15 when Swachh Bharat Mission (SBM) was launched. At the current rate of construction, the mission of 100 per cent household toilet coverage will be achieved by October 2021.

Similarly, in Varanasi district of Uttar Pradesh—where PM Modi’s constituency is located—the rate of construction increased by three times, 16 times and 44 times in 2015-16, 2016-17 and 2017-18 respectively, in comparison to 2014-15. At the current rate of construction, the mission of 100 per cent household toilet coverage will be completed by September 2018. The estimates in 2016 suggested that it would 100 per cent coverage can only be achieved by 2048.

Down To Earth recently travelled to Gonda district in Uttar Pradesh and found that there, too, constructing toilets is the goal, instead of ending open defecation.

About 100 kilometres east of Uttar Pradesh’s capital city of Lucknow, the district headquarter town of Gonda made it to national headlines in mid-2017 when it was named as the dirtiest city in India by the Swachh Survekshan rankings. Now with just one and a half years left to meet the Swachh Bharat Mission (SBM) target, the laggard districts are in competition to bring about 100 per cent toilet coverage, and Gonda district recently embarked on an ambitious drive.

Christened “Mission 32”, the district targeted to build 32,000 toilets in just 120 hours between March 26 and 30, 2018. “This scheme will not only help us remove the tag of one of the dirtiest districts in the country, but will also serve as an exceptional example of efficiency, commitment and community involvement,” says J B Singh, the district magistrate of Gonda.

“It is more like a dream for me,” says Khaimul Nisha, a 72-year-old villager from Virahmatpur gram panchayat of Wazirganj block. “My son who is a farmer has been trying to build a toilet for long. He registered for financial support last year in November. This year we were lucky enough to get our name in the list. Soon we will get rid of the shame of going out,” adds Nisha.

In most of the villages it is common to see residents engaged in digging pits, carrying bricks or cement or supervising toilet construction. As many as 230,000 individual household toilets have been constructed in the district so far since the initiation of SBM (rural). “In our village only half of the villagers have toilets in their household. People barely meet the essentialities of normal living. Building a toilet is a kind of luxury for most villagers. Toilet construction is only in their wishlist, which will not happen without external support. The local administration came forward with financial help and the response from the villagers is receptive,” says Fatima, sarpanch of Khorhansha gram panchayat of Jhanjhari block.

Prior to the massive drive, the household toilet coverage in Gonda was just below 40 per cent and it climbed to 46 per cent in just one week of the recent construction phase. Gonda district has always been a back bencher in terms of sanitation. According to the 2011 Census, the district showed that 91 per cent of the rural population, which contributes 70 per cent of the population in the district, opted for open defecation. After the launch of SBM in 2014-15, the rate of toilet construction in the district picked up and around three times more toilets were constructed. The rate peaked in 2017-18, where around 21 times more toilets were constructed compared to pre-SBM.

Brijesh Kumar Srivastava, the SBM (rural) coordinator of Gonda, explains that the poor progress in household coverage of toilets was basically due to poverty. “In the first phase of SBM, we mobilised the community and tried to sensitise them about the ill-effects of open defecation. It was not an easy task. We contacted each and every beneficiary and cajoled them to construct toilets by explaining the negative health impacts. The residents were finally convinced that the obnoxious practice contributed to bacterial infections and gastrointestinal disorders resulting in the loss of income for family members and huge expenditure on curing illnesses,” says Srivastava.

But the manner in which the money of Information, Education and Communication (IEC) was spent differed according to district officials and the Ministry of Drinking Water and Sanitation (MDWS). The district had spent over I1 crore on IEC in the last two financial years, according to MDWS data of March 2018. The district officials say they had spent it on wall writings, hoardings and banners. This does not tally with the MDWS data of March 2018. According to MDWS data, the money was spent in “others” category, which was not explained. “Luckily, the response received from residents was very positive due to IEC,” says Srivastava. People liked the idea of building toilets as there is barely any space available to defecate in the open.

People, especially women, suffer massively due to this. They need to wait for long hours to relieve themselves. This often leads to a situation of shame and disgrace for them. “We have seen an exponential increase in toilet demand and huge number of applications,” adds Srivastava. But what demotivated the residents in the early phase of SBM was the cash flow. Hence, Mission 32 was launched where cash flow was made easy.

This is not the first time such a rush for toilet construction has happened in India. A construction of 8,000 toilets in Udham Singh Nagar district in Uttarakhand in just 480 hours saw the district enter the Limca Book of Records in 2016. Peramnalur district in Tamil Nadu was not far behind. It had built over 4,666 household toilets in just 48 hours in February 2017. The most striking initiative was in Vizianagaram district in Andhra Pradesh where 10,500 household toilets were constructed in just 100 hours in March 2017. This inspired the district of Prakasam in the same state and 30,000 toilets were constructed in 700 gram panchayats in just 48 hours. Many districts in Chhattisgarh and Jharkhand also embarked on a toilet construction spree ( see ‘The construction rush’). 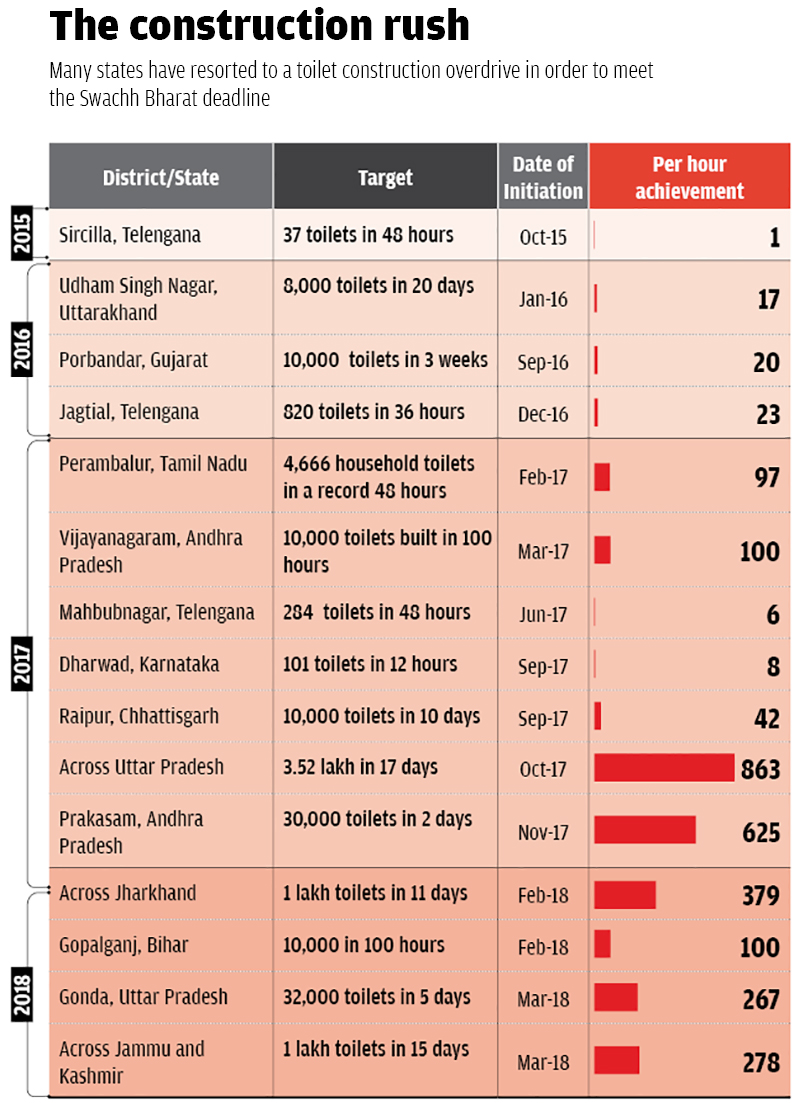 Deepak Sanan, former additional chief secretary, government of Himachal Pradesh, rejects the construction-focused model in favour of a strategy aimed at creating community demand for toilets. Ending open defecation rather than constructing toilets should be the goal. According to him, the presence and absence of toilets has now become the measurable tool for sanitation. There have been several examples which failed to trigger the communities to use toilets. Thus there is increase in toilets, but it is a very small step towards making a state open defecation free. The district of Gonda, according to MDWS, had over 25,000 dys-functional toilets as on March 26, 2018. The district officials lay the blame on previous programmes that could not motivate people to use toilets. Under SBM, only 1.7 per cent toilets were converted to functional ones. Therefore, the villages need to look into the remaining 24,000 dysfunctional toilets.

Gonda district will have to build 20 toilets per hour to achieve its target by October 2019 of 100 per cent household coverage. Recent drives like the Mission 32 can make the target achievable, but will this bring about a true open defecation free status is a question that only time will tell.